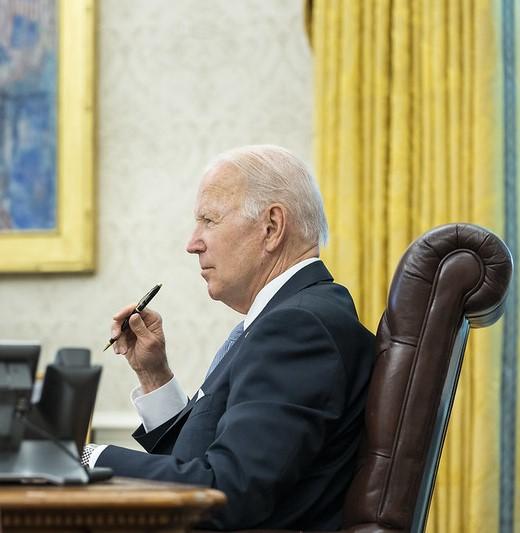 Last night during a "60 Minutes" interview, President Joe Biden said the pandemic is over, though COVID-19 is still a problem, which prompted swift and sharp criticism among some public health experts.

The president's comments come at a time when the government is rolling out a new two-strain COVID vaccine booster, updated to protect against Omicron subvariants (see today's related story), and as virologists see some signs of other Omicron subvariants starting to challenge BA.5 dominance.

During the "60 Minutes" segment, reporter Scott Pelley and Biden were touring the Detroit auto show, when Pelley noted that the city's auto show was its first in 3 years and asked Biden if the pandemic is over. Biden replied, "The pandemic is over. We still have a problem with COVID. We're still doing a lot of work on it."

The president pointed out that no one at the venue was wearing a mask and people seem to be in good shape. "I think it's changing, and I think this is a perfect example of it."

Two administration officials told Politico that Biden's comments weren't part of his planned remarks. Later in the interview, Biden spoke about the impact of the pandemic on families and communities, uncertainty about the future, and the loss of more than 1 million lives.

Infectious disease expert Michael Osterholm, PhD, MPH, said pandemics aren't declared over based on policy decisions, but rather scientific consensus. And as new subvariants such as BA.2.75.2 begin challenging BA.5, he said it's important to be truthful that scientists don't know what the future brings.

Osterholm is the director of the University of Minnesota's Center for Infectious Disease Research and Policy, publisher of CIDRAP News.

He also sees two more problems with Biden's comments about the pandemic being over. One worry is that Biden's assessment will conflict with efforts to extend the nation's public health emergency for COVID, which has been used to expand Medicaid coverage, telehealth services, enhanced payments to hospitals, and other pandemic measures. The public health emergency has been in effect since Jan 31, 2020, and the Biden administration has signaled that it would be extended again for another 90 days when it is up for renewal in the middle of October.

The White House is reportedly preparing to ask Congress for $22.4 billion to fund the ongoing COVID response, which would cover short-term needs such as testing, research, developing next-generation vaccines, and supporting the global response.

Osterholm also said Biden's comment has "wounded" the government's messaging about the importance of getting the updated COVID booster, which he said is the best tool for decreasing serious illnesses and deaths from COVID. Health officials have a challenge convincing a skeptical public.

A high death toll as the new normal?

Celine Gounder, MD, ScM, on Twitter today said considering the pandemic as over would mean accepting that the new normal is 3,000 deaths per week from COVID. "That our new normal is that we're numb to these deaths. Mr President, can't you imagine better? Can't America do better. And if so, where's your leadership?"

She said she agrees with recent comments from World Health Organization) Director-General Tedros Adhanom Ghebreyesus, PhD, who said that the world has never been in a better position to end the pandemic—but it's not yet over. She added, however, that the end of the pandemic depends on whether the United States and other nations use the tools they have to drive down the virus even further.

Gounder, an epidemiology professor at New York University, and Osterholm both served on Biden's COVID-19 advisory board during the presidential transition months.

In a variant proportion update on Sep 17, the Centers for Disease Control and Prevention (CDC) said the percentage of BA.5 Omicron subvariant sequences declined slightly, from 86.0% to 84.8%, over the past week, with the share of BA.4.6 rising slightly, from 9.4% to 10.3%.

Also, the proportions of two other Omicron subvariants that the CDC is tracking similarly rose slightly, including BA.2.75 and BF.7.

The nation's 7-day average for new daily cases is 57,246, according to the Washington Post tracker, which reflects an 8% decline in daily cases and a 7% fall in hospitalizations, but a 9% rise in deaths.