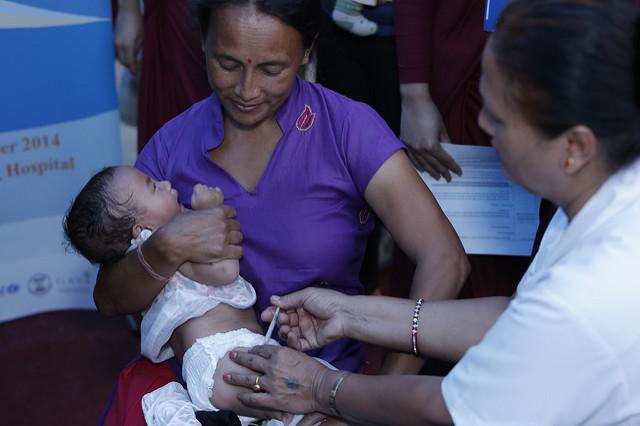 To help alleviate worse-than-expected shortages in inactivated polio vaccine (IPV), outside experts who advise the World Health Organization (WHO) on vaccine issues this week recommended that countries prepare to administer IPV intradermally as a dose-sparing tactic.

Administering the vaccine intradermally rather than subcutaneously could increase the available doses at least twofold.

The development marks the second time in the past few months that fractional dosing has been endorsed by health officials to ease vaccine shortages. In June the same panel approved a plan to stretch limited yellow fever vaccine supplies—drained by outbreaks in Angola and the Democratic Republic of Congo—by using one-fifth of the regular dose.

The recommendation comes from the WHO's Strategic Advisory Group of Experts (SAGE) on immunization, who met this week in a regularly scheduled meeting to discuss topics related to the Global Vaccine Action Plan, which includes a goal of eradicating polio.

At a media telebriefing today, the group's chair Jon Abramson, MD, said the world is close to being on track to eradicate the disease, but the IPV vaccine shortage, plus problems conducting immunization campaigns in hard-to-reach areas such as northern Nigeria, are obstacles.

Several countries are in the middle of replacing oral polio vaccine (OPV) with IPV, which doesn't carry the risk of vaccine-derived polio seen with OPV. Health officials have known about the IPV shortage, but Abramson said the shortage is severe enough now to warrant consideration of a dose-sparing strategy.

Officials today said two manufacturers of the vaccine have had problems with production and getting enough raw materials to make the vaccine and have underestimated the challenge of scaling up production.

Philippe Duclos, DVM, PhD, senior health advisor to the WHO, and each worsening shortage forecast has required countries reprioritize IPV use in countries at most risk for circulating vaccine-derived poliovirus.

Experts hope companies will solve the IPV shortage by 2018, Abramson said. "But I can't promise that. It's not something we can control."

The stopgap recommendation for the IPV vaccine comes amid a massive, unprecedented global switchover from a trivalent oral polio vaccine (OPV) to a bivalent version, triggered by the eradication of wild poliovirus type 2 (WPV2). During the switchover the WHO has recommended that children receive at least one IPV dose to provide protection during the switchover, and several countries are introducing IPV into their national immunization programs, which has greatly increased demand and led to vaccine shortages.

In March 2014 the WHO declared a public health emergency due to further international of the disease. Health officials have hailed progress against the disease in countries such as Afghanistan, Cameroon, Equatorial Guinea, Nigeria, and Pakistan. However, recent detections of cases in Nigeria's Borno state suggest ongoing circulation of wild poliovirus type 1.

Duclos said SAGE would publish its recommendations in the Dec 2 issue of the WHO's Weekly Epidemiological Record and that meeting proceedings and background materials will be posted soon on the SAGE part of the WHO's website.