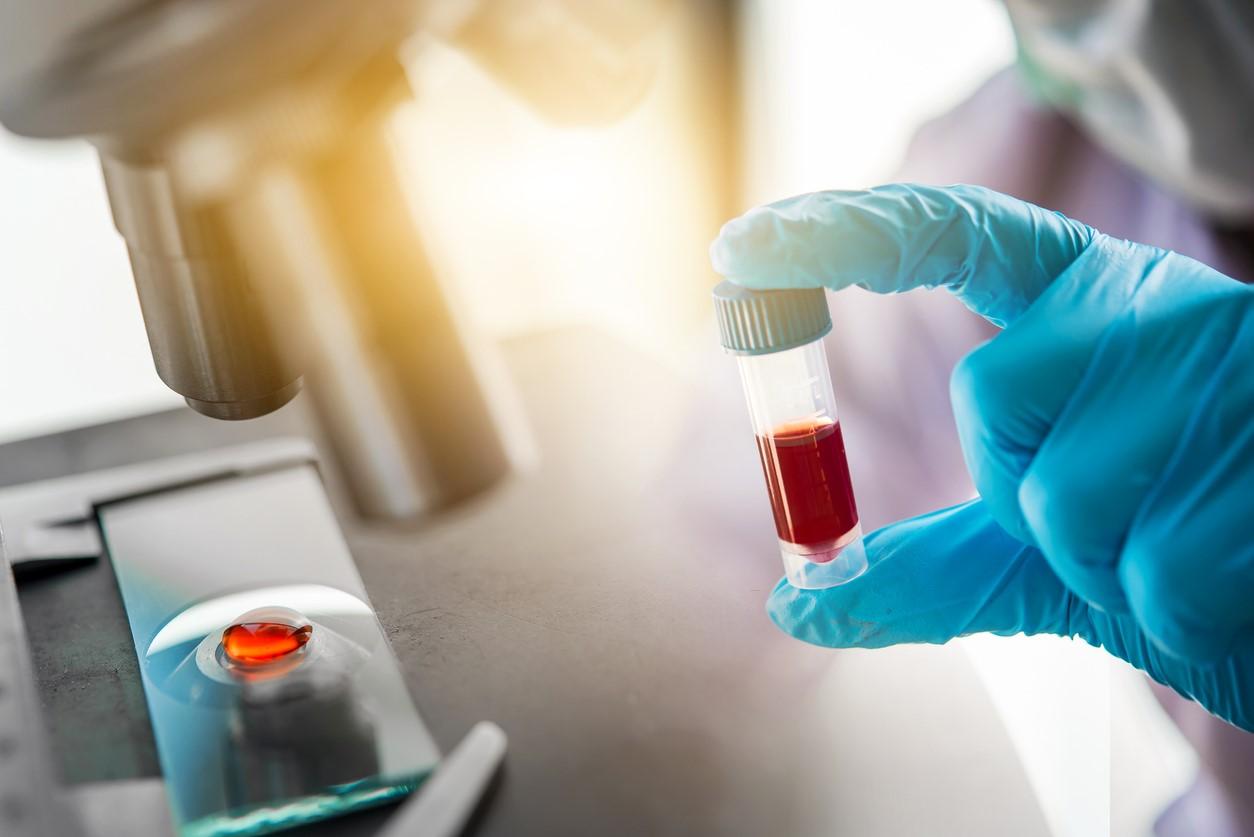 As the nation looks for ways to emerge from the shelter-in-place orders instituted across the country, there's growing hope that our blood might hold clues for how we move forward.

Late last week, the National Institutes of Health (NIH) announced that it has begun recruiting volunteers for a study to determine how many Americans without a confirmed COVID-19 diagnosis have been exposed to the SARS-CoV-2 virus, based on the presence of antibodies in their blood.

This "serosurvey" will analyze blood samples from more than 10,000 volunteers for the presence of two antibodies, immunoglobulin M (IgM) and immunoglobulin G (IgG), that the body produces in response to a virus. Researchers may also perform further analysis on some volunteers' blood to determine what kind of immune response was generated.

The primary aim of the study is to provide researchers with a better idea of how far the novel coronavirus has spread throughout the country. While nearly 600,000 people in the US have tested positive for COVID-19, that figure is based solely on the results of the molecular tests that look for the viral RNA, which have mainly been conducted in people who are sick or have had known exposure to infected people.

Antibody tests, while not useful for diagnostic purposes because of the time it takes to produce an antibody response, could indicate those who've had the illness at some point but never received official confirmation of infection, and those who've had very mild or even asymptomatic (symptom-free) infections.

"It basically is a way of saying who has been infected at any time in the past," says Gregory Storch, MD, an infectious disease specialist at Washington University School of Medicine in St. Louis.

Scientists also hope that proof of an immune response to the coronavirus could help determine who can safely go back to work while the virus remains a threat.

"Serological tests will enable us to determine what percentage of the population has been exposed to the virus," says Joanne Bartkus, PhD, director of the Minnesota Department of Health's (MDH's) Public Health Laboratory Division. "If we understand or find that a certain level of antibody does confer immunity to further infection, well, then that can be used to determine maybe who can go back to work, or who is less likely to be able to transmit the virus."

But Storch, Bartkus, and other experts say there remains a numbers of unknowns that need to be addressed.

The question of immunity

The unknowns begin with how much an immune response to SARS-CoV-2—the virus that causes COVID-19—tells us. Early studies suggest the production of IgM and IgG in COVID-19 patients typically occurs between 7 and 11 days after exposure, with IgM antibodies appearing first, followed by IgG antibodies.

The presence of these antibodies, which respond to specific antigens on the surface of the SARS-CoV-2 virus, indicate that a person has been exposed and their immune system has reacted. But does that necessarily mean a person is immune to getting re-infected?

"Often, but not always, the presence of antibodies corresponds to immunity to that agent, and if that turns out to be the case for COVID-19, that would be extremely important," says Storch.

The hope that exposure to SARS-CoV-2 confers some type of immunity is based on the findings of a preprint study from China, in which rhesus monkeys who had been infected and recovered were re-challenged with the virus. The results, which showed no recurrence of COVID-19 in the re-challenged monkeys, suggested some level of protective immunity after infection.

"That's a very encouraging finding, but we don't know yet whether that is true yet in humans, and we certainly don't know how long is the duration of immunity," Storch says.

Conducting antibody testing could help answer that question, says Bill Hanage, PhD, a professor of epidemiology at Harvard's T.H. Chan School of Public Health. "We don't know what exact antibody titers will ensure immunity, but this is the way to start studying it," he says.

If some level of protective immunity for people who've had COVID-19 does exist, serologic testing could also be a way to predict what the coming months will look like across the country, as states try to figure how, or whether, shelter-in-place orders can be eased, more people can return to work, and children can return to school.

"Serologic testing…will give us an idea of who is left in our community who is at risk of developing an infection," said Brown University professor of medicine Angela Caliendo, MD, PhD, in a recent media briefing for the Infectious Diseases Society of America. "Knowing how many people in a given community are still susceptible to the virus will be very important for us to decide what to do next winter, and how to manage both testing and whether we need to limit people's social interactions again in a preventive way."

"Together with sensible milder methods of physical distancing (maybe including masks) and good testing and contact tracing of active infections, we might hope to resume activity in a more 'normal' way in the coming months if a substantial fraction of the population show immunity," says Hanage via email, though he adds that he believes it's unlikely a substantial fraction will show immunity.

Some countries, like Germany and the United Kingdom, have even floated the idea of "immunity passports" that could be issued to people based on results of antibody tests. While that might seem like science fiction, Storch says we're entering into a new world.

But figuring out how many Americans have been exposed to the coronavirus and might have some level of immunity will require widespread serologic testing across the country, and that's a long way off. As with a lot of COVID-19 testing, there's a gap between the projections of how many people could be tested, and how much testing is actually occurring.

Right now, antibody testing is in its early stages. While the NIH begins enrolling participants for its study, several states and cities are just starting to roll out their own antibody testing. Among them is Minnesota, where the University of Minnesota and the Mayo Clinic have developed antibody tests that are reserved initially for frontline healthcare workers. State officials hope to eventually have antibody testing available statewide.

Storch says one of the benefits of antibody testing, which can be performed on just a pinprick of blood and can return results quickly, is that it lends itself to scaling up. "Every hospital has instruments that perform serological tests for various viruses," he says. "The tests can be automated and they can be run on high volumes of samples, so it certainly will be feasible to test large numbers of samples."

For COVID-19 antibody tests to be useful for helping map out a pandemic strategy going forward, however, they will have to be able to distinguish an antibody response that is specific to the novel coronavirus, and doesn't pick up responses to the other human coronaviruses that cause infections. They'll also need to be sensitive enough to determine who's had even a mild immune response to infection, and specific enough to rule out those who haven't been exposed.

"This might tell us a lot about the true spectrum of the disease when it comes to severity," says Hanage. "Early work suggests some people who are seropositive were not aware they had been infected."

But at the moment, the true accuracy of serologic tests for SARS-CoV-2 is another unknown. So far, the Food and Drug Administration (FDA) has granted an emergency use authorization (EUA) for only one antibody test—the qSARS-CoV-2 IgG/IgM Rapid Test from Cellex. The EUA allows a company to market unapproved diagnostic and therapeutic products during a declared emergency. According to Cellex, the test was 93.8% sensitive in testing on 128 samples from Chinese COVID-19 patients confirmed by reverse transcription polymerase chain reaction (RT-PCR), and 96.4% specific.

Those impressive-looking numbers, though still leave the possibility of a significant number of people having false-positive and false-negative tests. For example, if 5% of the US population actually had the virus, a test with 95% sensitivity and 95% specificity conducted in a million people would correctly detect 47,500 cases, along with 2,500 false-negatives (those who were infected but were missed).

"Imagine going to a healthcare worker and saying 'we're going to test you for antibodies right now, and if you're positive, you have a 1 in 2 chance it's not real,'" says Michael Osterholm, PhD, MPH, director of the Center for Infectious Disease Research and Policy (publisher of CIDRAP News). "Are you actually going to use that test in a meaningful way?"

Under another pathway established by the FDA to accelerate the availability of diagnostic tests in response to the pandemic, known as "Policy D," serologic tests for SARS-CoV-2 can be marketed and sold to clinical labs and hospitals as long as manufacturers have generated some level of validation data, even though the FDA has not reviewed those data.

The MDH's Bartkus says there are currently more than 70 vendors that have notified the FDA of their intent to market antibody tests that look for some combination of IgM, IgG, and immunoglobulin A (IgA) response. And little is known about these tests.

"What we're going to have to do is weed through which of these serologic tests are going to be useful and which ones are not, and we don't know at this point which clinical laboratories are going to adopt these tests," she says. "It's actually quite confusing, because there are so many of them and they have not undergone any review by the FDA."

Bartkus says this is just one of the issues that public health officials are trying to figure out on the fly as they respond to the pandemic.

"We're building the plane as we're flying it," she says.