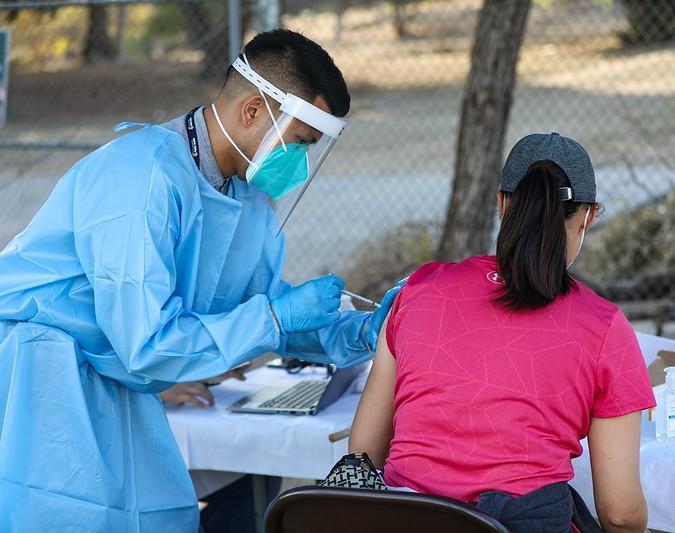 "We're sparing no effort in getting Americans vaccinated," Biden said today in Wilmington, Delaware. "We remain in a very dark winter, the infection rate is up 34%, we see 3 or 4,000 deaths per day. Things will get worse before they get better."

Biden said the Trump administration's efforts to roll out two approved COVID-19 vaccines, one from Pfizer and one from Moderna, was a dismal failure. He said he wanted to turn frustration into motivation and meet his goal of 100 million shots during his first 100 days in office.

"I am convinced we can get it done," Biden said.

The first step will be to work with states to clearly identify priority groups for the vaccine, the first of which will be adults 65 and older and essential frontline workers, including teachers and grocery store clerk.

To do so, Biden said the country will need 100 federally supported vaccination centers across the country, and he will call on the Federal Emergency Management Agency (FEMA) to establish the centers by the end of February. He also said he would oversee the creation of thousands of community immunization sites, such as school gyms and community centers, as well as mobile vaccination units that would travel to hard-to-reach communities to deliver the vaccines.

Biden's plan also builds on Trump's reliance on commercial pharmacies to distribute the vaccine. He also said he would use the full force of the Defense Production Act to make the supplies needed to administer vaccines, including syringes and personal protective equipment.

Lastly, Biden said he would always tell the truth about the virus, the vaccine supply, and the pandemic.

"We will manage the hell out of this operation," he said.

The plan also outlines an investment of $40 billion in the Disaster Relief Fund to provide supplies for the pandemic.

Today the Association of Public Health Laboratories applauded the plan.

"We're grateful that the plan recognizes testing as an important mitigation strategy in responding to the COVID-19 pandemic and includes funding to increase our disease surveillance and sequencing capacity to better identify emerging variants and track its spread," the group said in a press release.

"Just like on the vaccine side, this is the 'shot in the arm' that the testing infrastructure and public health workforce needs moving forward."

The Biden administration, however, will retire the Operation Warp Speed moniker, according to CNN, but has yet to come up with a new name. Professionals working for the effort for the Trump administration will be crucial to the Biden team's response, an official said.

According to the Washington Post, the Biden transition team was only this week allowed to attend the Trump administration's Operation Warp Speed meetings.