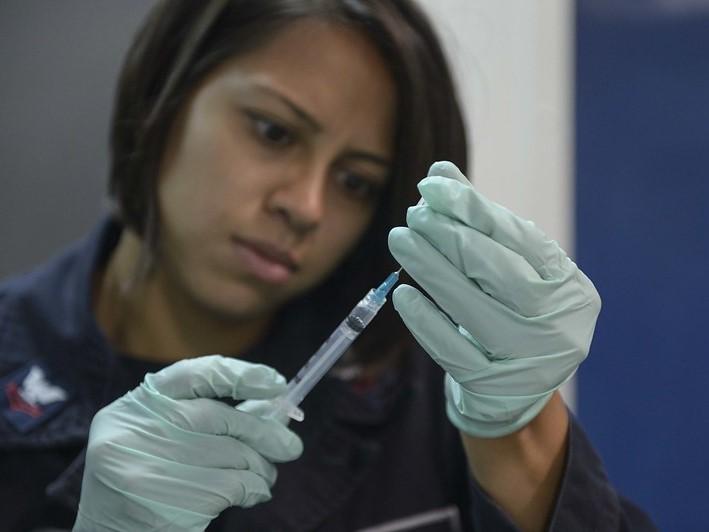 In more good news from the COVID-19 vaccine front, Moderna Inc. announced this morning that early data from a late-stage clinical trial indicate its vaccine candidate showed 94.5% efficacy against the coronavirus.

The news comes a week after Pfizer and BioNTech announced that their mRNA vaccine demonstrated 90% efficacy in a phase 3 trial involving more than 44,000 volunteers. Both announcements came via press release, with no accompanying peer-reviewed data.

But the Moderna announcement provided a little more detail on the effectiveness of its vaccine. The company said that a secondary end point analysis of severe COVID-19 cases found 11 in the placebo group and none among the five cases in the vaccine group. The independent Data Safety Monitoring Board did not report any significant safety concerns.

"This is a pivotal moment in the development of our COVID-19 vaccine candidate," said Stéphane Bancel, CEO of Moderna. "This positive interim analysis from our Phase 3 study has given us the first clinical validation that our vaccine can prevent COVID-19 disease, including severe disease."

The vaccine combines Moderna's mRNA delivery platform with a stabilized SARS-CoV-2 spike immunogen developed by NIAID scientists. It was designed to cause the body to produce neutralizing antibodies against the coronavirus's spike protein, which the virus uses to bind to and enter human cells.

Phase 1 trial results reported in July showed that the mRNA-1273 produced high levels of neutralizing antibody activity against the coronavirus. Additional phase 1 data published in September indicated the safety profile and immune response in older volunteers is comparable to that in younger trial participants.

Moderna was one of five companies to receive funding from the US government through Operation Warp Speed, a program to speed development and delivery of COVID-19 vaccines and therapeutics. In April, the company received $483 million from the Biomedical Advanced Research and Development Authority to enable large-scale production of the vaccine.

The Moderna vaccine requires two doses. In the COVE trial, volunteers in the vaccine group received doses 28 days apart. Moderna said that by the end of December, it expects to have 20 million doses of the vaccine ready to ship in the United States, enough to vaccinate 10 million people. Pfizer said last week that it expect to produce 50 million doses of its vaccine by the end of 2020.

Both companies will first have to submit safety and efficacy data to the Food and Drug Administration (FDA) for an emergency use authorization. Moderna says it intends to submit the data to the FDA and global regulatory agencies in the coming weeks. The FDA requires at least 2 months of safety data following the second dose.

Like the Pfizer-BioNtech vaccine, the Moderna vaccine will also require cold storage, which experts have noted could pose problems for distribution. But while the Pfizer vaccine needs to be stored at minus 94 degrees Fahrenheit (–94°F), the Moderna vaccine needs to be stored at –4°F and is stable for 30 days at refrigerator temperatures (36°F to 46°F).

Moderna said the 95 cases reported in the placebo group included infections in 15 older adults (age 65 and older) and in 20 participants from diverse communities. Of the adverse events reported, most were mild or moderate and were generally short-lived, including injection-site pain, fatigue, and headache.

Michael Osterholm, PhD, MPH, director of the Center for Infectious Disease Research and Policy, publisher of CIDRAP News, said the announcement from Moderna was "very encouraging news," and noted that while the numbers were small, the fact that there were no severe COVID-19 cases in the vaccine group was also good news.

"It appears from the data that there were severe illnesses prevented, but we need to further understand that," he said. "But it's very encouraging."

Last week's announcement from Pfizer and BioNTech did not mention whether their vaccine had prevented severe cases.

But Osterholm cautioned that it's going to be several months before large segments of the population can get vaccinated, and with the pandemic spreading unabated throughout the country, the public will need to do everything it can to minimize transmission of the virus in the coming months.

"We need to keep our eye on the ball with what's happening right now," he said. "And for the next several months, vaccines are going to have little to no major impact on that."

He added that a lot of work still needs to be done to convince the public to take a COVID-19 vaccine. A September poll from the Pew Research Center found that nearly half of US adults would not get a vaccine if it were available today.

"If a large segment of the population doesn't [get vaccinated], then we're still going to have a lot of community transmission," he said.