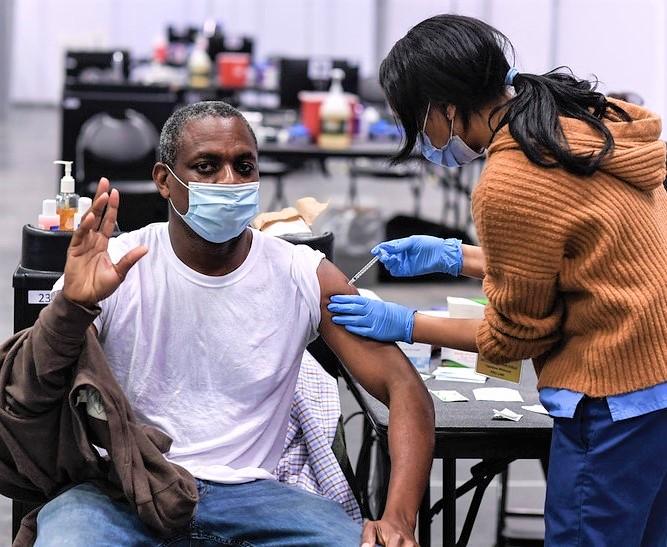 One day before Joe Biden is sworn in as the 46th president of the United States, a new poll from Washington Post-ABC News shows that 52% of Americans think the coronavirus outbreak is out of control, and 62% say trying to control the pandemic is more important than restarting the economy.

The numbers come as a national vaccine campaign has rolled out in fits and starts across the country.

Though the new poll still shows a political divide, most Americans said they will (40%) or probably will (23%) get a COVID-19 vaccine when one is made available to them. Half of Democrats polled said they would definitely get a vaccine, while only 25% of Republicans said the same.

Sixty percent of all respondents expressed disapproval at President Trump's handling of the pandemic. In a final Gallup poll published yesterday, Trump had an overall approval rating of 34%.

President-elect Biden has said tackling the pandemic will be the most important job of his presidency, but officials from his campaign told CNN they are nervous that President Trump's task force hasn't been transparent in sharing full details of the federal response to the pandemic.

According to a new Kaiser Health News analysis, black Americans are getting vaccinated against COVID-19 at lower rates than whites. Minorities in America have been disproportionately affected by the virus and die at higher rates than whites, yet in the 16 states with data on race available, whites are vaccinated at rates of two to three times more than blacks.

The disparity is due to both a lack of access and to anti-vaccine sentiment in the black community, Kaiser said.

In related news, New York state said a significant percentage of nursing home workers in that state have refused the vaccine. Although 37% of staff in the state's skilled nursing facilities have been vaccinated, 32% have declined vaccination, according to the New York Times.

Among other groups, demand for the virus has outstripped supply. In Florida, where residents over 65 have been encourage dot get the vaccine, 40,000 people are overdue for their second dose—5% of the nearly 916,000 people who received first doses in the state.

Only 3% of Americans have been vaccinated against the virus to date.

B117 variant likely circulating since November

B117, the highly contagious strain of COVID-19 first identified in the United Kingdom, was likely circulating in California and Florida since mid-November, according to new phylogenetic evidence from researchers at the University of Arizona. The timeline means the virus was circulating 6 weeks in the United States before it was identified in the United Kingdom, where it has caused a massive surge of virus activity that led to Britain's current, most severe lockdown.

The Centers for Disease Control and Prevention (CDC) said there are at least 122 confirmed cases of B117 in 20 states, as of yesterday.

Meanwhile, officials in California said another variant of the coronavirus, known as 452R, is being detected more and more in that state, according to KQED. Santa Clara County health officials say the variant has been identified in several large outbreaks in the county, but it's not clear yet if it spreads more easily.

"The fact that this variant was identified in several large outbreaks in our county is a red flag and must be investigated further," said Santa Clara County Health Officer Dr. Sara Cody, in a statement. "This virus continues to mutate and adapt, and we cannot let down our guard. This news underscores the need for everyone to follow all prevention measures and get vaccinated as soon as they are offered the vaccine."