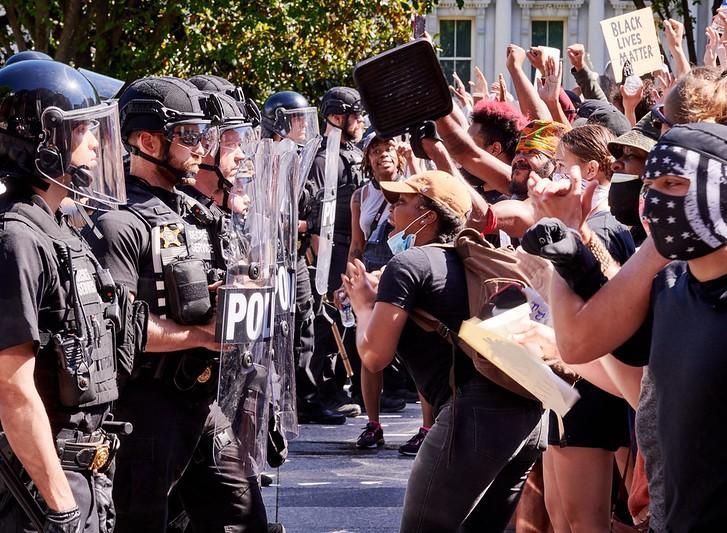 Protestors confront the Secret Service near the White House on May 30., Geoff Livingstone / Flickr cc

From Los Angeles to Minneapolis to Washington, DC, crowds of thousands gathered across the country this weekend to protest the death of George Floyd, an unarmed black man, after a Minneapolis police officer knelt on Floyd's neck until he was unconscious on Memorial Day.

Though mayors urged protesters to be mindful of physical distancing and urged mask use, the protests, gatherings, and riots sparking new fears that the United States will see a spike in COVID-19 activity in the next 2 weeks.

According to the New York Times, Los Angeles Mayor Eric Garcetti warned protests could become super-spreading events, and Atlanta Mayor Keisha Lance Bottoms suggested protesters get a COVID-19 test in the next week.

Health experts warned that tear gas and pepper spray both cause coughing, eye watering, and respiratory secretions, and that yelling and chanting—even though conducted outside—could help spread the virus among aerosolized droplets. They also cautioned that cities such as Philadelphia and Detroit, which held large parades during the 1918 influenza pandemic, saw a huge spike in activity within days of the event.

The protests take place against a backdrop of easing stay-at-home measures across the country, and 40 million Americans suffering unemployment at the hands of the coronavirus.

In Minnesota, which has been the epicenter of protest activity, the state entered phase 2 of its reopening plan today, which includes limited outdoor restaurant dining, and limited salon openings. During a press conference today, Minnesota Health Commissioner Jan Malcolm thanked community leaders for handing out masks during protests, but warned that subsequent cases are likely.

Malcolm also highlighted the racial inequities seen in Minnesota's COVID-19 outbreak: Black people make up 6.6% of population but over 22% of all COVID-19 cases and 20% of hospitalizations, trends similar to those seen in the state's Hispanic population.

Despite widespread economic devastation, a new Washington Post-ABC News poll shows that 57% of Americans overall and 81% of Democrats say "trying to control the spread of the coronavirus is most important right now, even if it hurts the economy."

Only 27% of Republicans agree, and 66% of polled Republicans said restarting the economy is more important than controlling the virus.

Today the United States has 1,798,298 COVID-19 cases and 104,658 deaths, according to the tracker maintained by Johns Hopkins University. Last week, the Centers for Disease Control and Prevention said they predict 115,000 US deaths by Jun 20. A new model produced by researchers at Emory University said the US could see 200,000 deaths by Labor Day as social distancing measures are lifted during the summer.

"We are currently at a rate of about 1,500 deaths per day in the U.S. That means that by Labor Day, there will be another hundred thousand deaths in our country," said Carlos del Rio, MD, a professor of medicine and global health at Emory University, according to ABC News.

Models vary widely when predicting total numbers of deaths from COVID-19. The model put forth by the Institute for Health Metrics and Evaluation of the University of Washington—the model most often cited by the White House—predicts 132,000 US deaths by Aug 4.

When looking at total cases reported daily in the US, case counts have dropped to about 21,000 new cases per day, down from a peak of 30,000 new cases per day in April. But hot spots and stubborn pockets of activity in the Midwest and the rural South are still seeing sharp case increases and unsteady transmission patterns, the New York Times said.

Today Eli Lilly announced it was starting a human study of a potential COVID-19 antibody treatment. The experimental treatment is designed to neutralize the virus in human cells, and was based on samples collected from lungs of one of the first US COVID-19 patients.

Also today, Emergent BioSolutions announced it would be joining the White House's "Operation Warp Speed" to quickly develop a COVID-19 vaccine through a $628 million task order that would see the company help produce COVID-19 vaccine candidates through 2021.