US flu activity still low, but creeping up 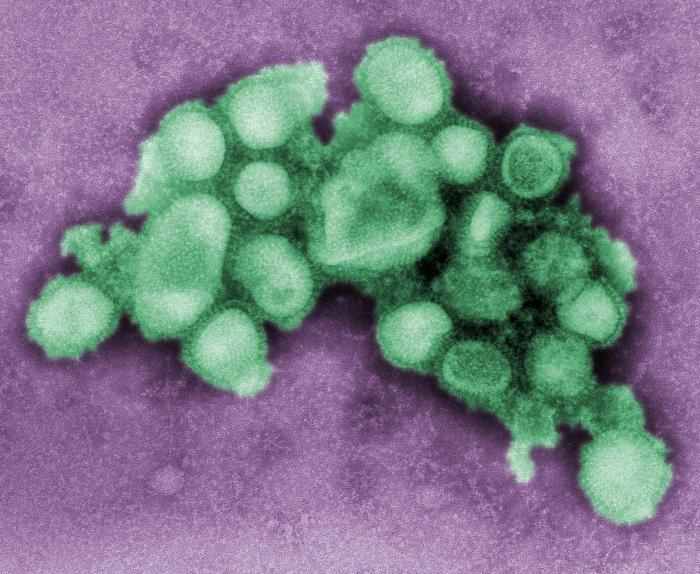 The 2009 H1N1 influenza virus, which so far this season has dominated in the United States and Canada., CDC / C. S. Goldsmith & A. Balish

Influenza activity in the United States edged slightly higher during Thanksgiving week, but it remained low overall, with most of the nation reporting minimal signs of the virus, the US Centers for Disease Control and Prevention (CDC) said today.

The share of medical visits prompted by influenza-like illness (ILI) reached 1.9%, up from 1.7% the previous week, but still short of the national baseline of 2.0%, the CDC said. But as was true a week earlier, the percentages were above national or regional baselines in the southeastern and south-central states.

Also slightly higher last week was the proportion of respiratory specimens that tested positive for flu, at 10.1%, versus 7.9% a week earlier. The percentages were considerably higher in two CDC regions: the southeastern states at 13.2%, and the region comprising Colorado, Montana, North Dakota, South Dakota, Utah, and Wyoming, at 13.8%.

Just two states, Mississippi and Texas, reported high flu activity, as they had the previous week. Moderate activity was cited in Alabama and Louisiana, low activity in Arkansas, Delaware, and New York City, and minimal activity in 44 states.

As for the geographic scope of flu cases, nine states, most of them in the South, reported regional circulation, up from six states a week earlier. The rest had localized or sporadic activity.

One pediatric death was reported last week, raising the total for this season to three. The death occurred the previous week.

No more flu isolates with oseltamivir (Tamiflu) resistance were reported, leaving the seasonal total at 6, the CDC reported.

Still quiet in Canada and Europe

Canada's latest flu update indicated a situation much like that in United States, with cases increasing but remaining low overall. Most provinces and regions had sporadic or no activity, according to a Public Health Agency of Canada (PHAC) update today.

Meanwhile in Europe, all 29 reporting countries had only low-intensity flu activity last week, the European Centre for Disease Prevention and Control (ECDC) reported today. Just 3% of 393 sentinel respiratory specimens in 24 countries tested positive for influenza A, and the United Kingdom reported that three patients were hospitalized with confirmed flu infections.

The incidence of ILI and acute respiratory infections remained below the epidemic threshold in all reporting countries, the ECDC said.