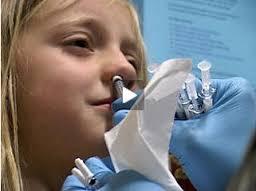 This past summer when influenza experts at the Centers for Disease Control and Prevention (CDC) went over all their data on flu vaccine effectiveness (VE) during the 2013-14 flu season, they found a big surprise: The nasal-spray vaccine was ineffective against H1N1 viruses in young children—the group in which the vaccine was expected to be most protective.

Past studies had suggested that the intranasal vaccine, also known as live-attenuated influenza vaccine (LAIV) and commercially as FluMist, worked especially well in children 2 to 8 years old. Those findings prompted the CDC in June of this year to preferentially recommend LAIV over inactivated influenza vaccine (IIV, the injected kind) for children in that age-group.

In a statement yesterday about the unexplained new findings, the CDC said they mean that LAIV may not protect kids against H1N1 viruses in the flu season now starting, because this year's vaccine uses the same H1N1 virus as last year's product.

But the agency decided not to change its current preferential recommendation about LAIV now, in the middle of the vaccination season, for several reasons. Among other things, the agency said the vaccine has been shown to provide good protection against A/H3N2 and influenza B viruses in the past and that H1N1 viruses seem scarce so far this season. Also, vaccine providers have already received their vaccine supply for this season and have administered a good share of it.

The American Academy of Pediatrics (AAP)—which has not preferentially recommended LAIV over IIV for children—likewise is leaving its flu vaccine recommendations unchanged for now. In a statement yesterday about the CDC findings, the group said any licensed, age-appropriate flu vaccine should be used.

CDC officials presented their data on low effectiveness of LAIV in children at last week's meeting of the Advisory Committee on Immunization Practices (ACIP), which advises the agency on vaccine guidelines. The ACIP decided to stick with the current recommendation for now, said Alicia Fry, MD, a medical epidemiologist in the CDC's Influenza Division.

"Everyone was concerned but nobody thought it was time to change the recommendations so rashly," she told CIDRAP News. "We're continuing to try to understand this. And I'm sure MedImmune [manufacturer of FluMist] is doing a lot of work to try to figure it out."

In yesterday's statement, the CDC noted that its interim estimates of flu VE for 2013-14 were published in February. That report, based on studies by the agency's five-site US Flu VE Network, estimated the combined effectiveness of all flu vaccines against H1N1 in children at 67% (95% confidence interval [CI], 51%-78%). It didn't give a separate estimate for LAIV effectiveness for H1N1.

The CDC said the final overall VE estimates were similar to the interim figures. But end-of-season data that were evaluated during the summer permitted separate estimates for LAIV and IIV. "During 2013-2014 there was no measurable effectiveness for LAIV against influenza A(H1N1) among children enrolled in the study," the agency said.

Fry said the CDC's confidence in its ability to compare the effectiveness of LAIV and IIV has grown in recent years as the share of children receiving LAIV has increased.

"In the summer when we ran the analysis we were very surprised," she said. "The first thing we did was double check everything. Then we let the ACIP working group know. And because this is an observational study, we reached out to our partners in the US and abroad to see if anybody else doing vaccine effectiveness analysis" had similar findings.

As it happened, both MedImmune and the US Department of Defense had done VE estimates, and they came up with similar results for LAIV versus H1N1 in children, she said. "That gave us a lot more confidence that this was maybe a true signal that we had to take seriously," she added.

Fry said the low effectiveness against H1N1 was clearest in children aged 2 through 8 years, because most of the LAIV recipients were in that group. "We did see the same result in ages 9 to 18, but the numbers are smaller and it's hard to say for sure."

When analysts compared LAIV and IIV effectiveness for all flu types in the younger group over the past three flu seasons, they found that LAIV fared better in the 2011-12 and 2012-13 seasons, according to CDC slides presented at the ACIP meeting. But in 2013-14, IIV appeared to be far more protective: LAIV recipients were more than five times as likely to contract flu as were IIV recipients.

Edward Belongia, MD, director of the Epidemiology Research Center at the Marshfield Clinic Research Foundation in Wisconsin, participates in the CDC's US Flu VE Network and also researches flu VE for MedImmune, using separate populations. He said the 2013-14 flu season offered the first good opportunity to compare the performance of LAIV and IIV, because H1N1 was the predominant strain and more children were getting FluMist.

Belongia said the MedImmune study showed that LAIV was effective against influenza B, commenting, "This seems to be a specific issue with H1N1, not an overall problem with the entire vaccine."

No explanation for findings

Just why the vaccine had low effectiveness against H1N1 is a mystery. The CDC statement said, "It is possible that results may be specific to the H1N1 component of LAIV. Influenza H1N1 viruses predominated during the 2013-2014 season for the first time since their emergence in 2009 when they caused a pandemic. It also is possible—though less likely—that there is an unidentified issue with the study methods or analysis plan."

Belongia said two studies published this year suggest that some characteristics of the hemagglutinin in the H1N1 virus used in LAIV could affect its thermal stability and therefore its ability to replicate, which in turn could affect its immunogenicity.

He also observed that the clinical trials that were the basis for the ACIP's recommendation in favor of using LAIV in young children were conducted a decade or more ago, well before the 2009 pandemic, which marked the emergence of the current seasonal H1N1 virus. One study during the pandemic found that the monovalent pandemic H1N1 vaccine was about 55% effective in young children, but the finding was not statistically significant, he added.

"Another thing that's different now is that now most children are being vaccinated year after year, so the majority of children that got LAIV were also vaccinated the previous year," Belongia said. "That was almost certainly not the case back when they did the trials. Whether that's important or not, I don't know."

The MedImmune data presented to the ACIP indicate that the vaccine's low effectiveness against H1N1 was specific to certain production lots. The presentation included a slide showing that vaccine shipped during weeks 4 through 9 of the shipping season had –49% effectiveness, whereas doses shipped earlier or later had an effectiveness of 83%.

Reasons for staying the course

The CDC cited four reasons for leaving the current flu vaccination advice unchanged in the face of the LAIV findings:

Belongia agreed with the decision. "The timing here is not great, but the world of influenza is unpredictable and nobody saw this coming 6 months ago. Given what we know—and there are still a lot of unanswered questions—I think the recommendations from the CDC and AAP are exactly right. As new information accrues it will be re–looked at."

The AAP statement said this season's LAIV is "unlikely" to protect against H1N1, since it uses the same virus as last year's version. But on the basis of previous studies, it said, LAIV is expected to protect against H3N2 and type B viruses related to those in the vaccine "and may offer better protection against drifted strains of influenza viruses than IIV."