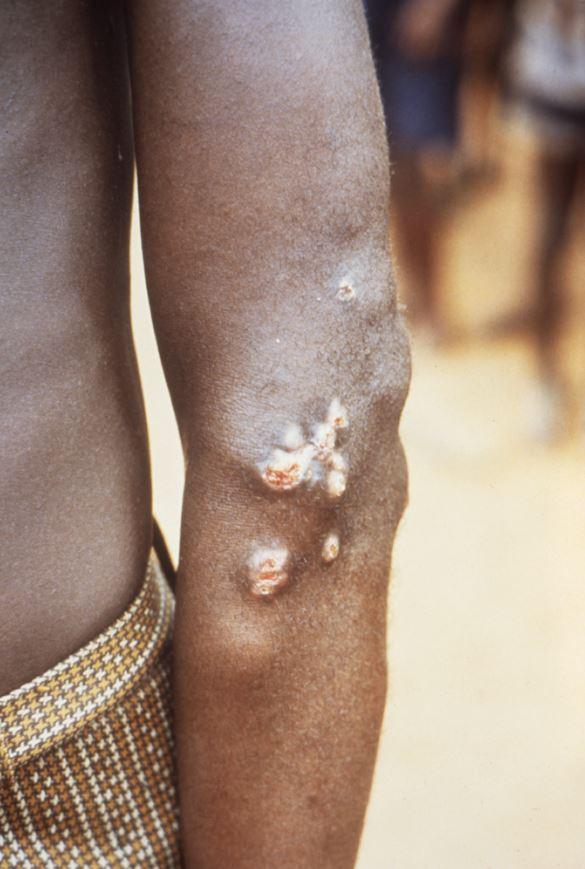 A new study by an international team of scientists is shedding light on the re-emergence and development of antibiotic resistance in a neglected tropical infection.

In the study, published yesterday in The Lancet Microbe, researchers performed whole-genome sequencing (WGS) on DNA from patients in Papua New Guinea who had yaws, an infection of the skin, bone, and cartilage caused by the bacterium Treponema pallidum subspecies pertenue (T p pertenue). The infection, which is transmitted through person-to-person contact, affects children in at least 15 countries, mainly in Africa, Asia, Latin America, and the South Pacific. If untreated, it can cause chronic, disfiguring skin ulcers.

The infections had been previously detected in a longitudinal study, conducted from 2013 to 2016 on Lihir, an island of Papua New Guinea where yaws is endemic, that was evaluating the impact of a World Health Organization (WHO) strategy for yaws eradication. The strategy, introduced by the WHO in 2012, involves mass administration of a single dose of the antibiotic azithromycin for all community members, regardless of infection status, followed by active case detection surveys every 3 to 6 months.

That study showed mass azithromycin treatment had largely been successful, reducing the prevalence of active yaws on Lihir from 1.8% to 0.1% at 18 months. But it also found that the infection began to re-emerge at 24 months and the prevalence climbed to 0.4% at 42 months. Most of the cases were latent infections in individuals who were absent at the time of mass treatment, but some were imported. The study also found five cases of yaws involving resistance to azithromycin.

In the new study, WGS revealed that re-emergence of the infection likely stemmed from multiple sources and that the resistance appears to have emerged in one patient before spreading to others, findings the authors say could shape the elimination strategy going forward.

In their analysis of 20 near-whole T p pertenue genomes obtained from swab samples of patients who had PCR-confirmed yaws, researchers from the United Kingdom, Spain, the United States, and Papua New Guinea found that 16 were part of a clonal sequence type (JG8) split into at least three distinct phylogenetic sub-lineages found in patients from different villages on Lihir. All three of these sub-lineages were found in the later rounds of post-mass azithromycin distribution follow-up, indicating they were all involved in yaws re-emergence.

The analysis also showed that these sub-lineages had distinct evolutionary histories, an indication that the re-emergence of the infection after mass azithromycin distribution did not stem from a single source, but multiple sources. The researchers suspect the re-emergence stems from people who had a latent infection and didn't receive azithromycin treatment, which resulted in the infection becoming active.

The researchers then performed further genomic analysis on the five cases of azithromycin-resistant yaws. All of the T p pertenue samples from these cases belonged to the JG8 sequence type, three of the genomes from the samples were nearly identical, and all contained a single mutation linked to azithromycin resistance. In the index patient, the mutation was not detected before treatment.

Subsequent epidemiologic tracing identified potential transmission links between all five cases. These findings suggest the resistance mutation occurred in the index patient after azithromycin distribution and was then transmitted to the other four.

The authors of the study say these results provide information that could help improve the WHO's mass azithromycin distribution program, which has also been implemented in Benin, Ivory Coast, Ghana, Togo, and Vanuatu.

"Our results have big implications for how yaws elimination campaigns are run—we can recommend high treatment coverage initially, and there needs to be careful surveillance and follow up to detect and swiftly treat any re-emergence, to prevent the bacteria spreading," first author Mathew Beale, PhD, of the Wellcome Trust Sanger Institute, said in a press release.

Beale and his colleagues also recommend careful monitoring of affected communities following mass azithromycin distribution to detect any individuals with treatment failure and retreat them with alternative regimens.