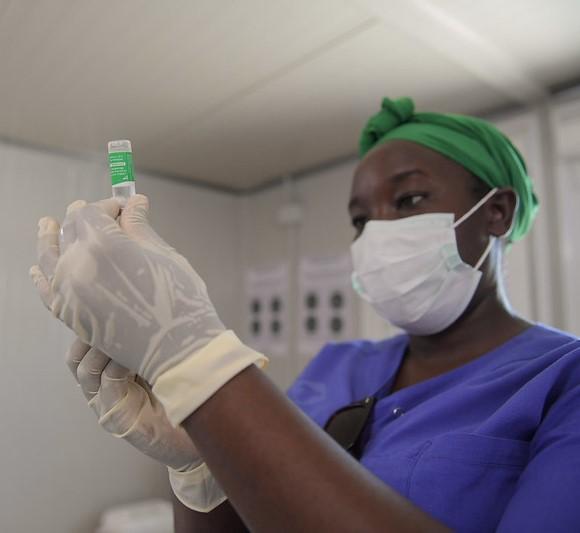 As cases rise in Africa, the region urgently needs at least 20 million COVID-19 vaccine doses to deliver second doses during the recommended interval to vulnerable groups that have received their first dose, the head of the World Health Organization (WHO) African regional office said today.

In other developments, German scientists say they have identified a possible mechanism behind the very rare blood clot complications in some adenovirus vector vaccines. And Japanese officials are mulling extending the state of emergency for much of the country, coming just 2 months before the Olympic Summer Games start in Tokyo.

Africa 'balancing on a knife's edge'

At a WHO African regional office briefing today, Matshidiso Moeti, MBBS, the group's director, said Africa needs at least 20 million doses AstraZeneca-Oxford vaccine in the next 6 weeks so that those who received their first dose can get their second within the 8- to 12-week recommended interval between the two doses.

Vaccine supplies are scarce in many countries, partly due to delayed COVAX shipments related to a massive surge in India, where most supplies originated.

"It's too soon to tell if Africa is on the cusp of a third wave. However, we know that cases are rising, and the clock is ticking, so we urgently appeal to countries that have vaccinated their high-risk groups to speed up the dose-sharing to fully protect the most vulnerable people," she said.

Cases in Africa are up 17% this week, after declining for 3 weeks, but it's too soon to say Africa is experiencing a resurgence, she said, adding, "We are balancing on a knife's edge."

She thanked countries like France that have already donated, as well as groups that have pledged doses, but she said expediting the process, ideally though COVAX, is crucial.

In a related development today, a joint statement from the WHO and its partners called for urgent steps to fill the supply void of 190 million doses, with the situation in India showing why access to vaccines ahead of a surge is so important. The groups said important steps include securing full funding for advance commitments at a summit on Jun 2, redirecting existing doses to COVAX, and freeing up supply chains.

"COVAX's need for doses is greatest right now. Countries with higher coverage rates, which are due to receive doses soon should swap their places in supply queues with COVAX so that doses can be equitably distributed as quickly as possible," the groups said.

A clue in the vaccine blood clot probe

German researchers who conducted lab studies on cells to investigate rare blood clot side effects in people who have received adenovirus-vector vaccines yesterday suggested a possible mechanism. They detailed their findings in a preprint study that hasn't been peer reviewed yet.

The extremely rare blood clotting events have been reported from a number of countries in people who received the AstraZeneca-Oxford or Johnson & Johnson vaccines. The concerns led some countries to temporarily pause their campaigns and to modify existing policies.

In their study, the team suggested that the adenovirus vector brings some of the vaccine material into the cell nucleus, where it makes proteins that can split apart in the body, which can trigger blood clots in very rare instances.

One of the authors told the Financial Times that Johnson & Johnson is already working on a way to prevent the unintended splice reactions, according to the Washington Post.

In other vaccine developments, Sanofi and GSK today announced the launch of a phase 3 trial of their adjuvanted recombinant COVID-19 vaccine candidate. The study will enroll 35,000 adults across the United States, Asia, Africa, and Latin America. A second stage of the study will assess a formulation that targets the B1351 variant, which was first detected South Africa.

If everything goes smoothly, the companies predicted the vaccine could be authorized or approved in the fourth quarter of 2021.

Also, Indian officials have scrapped a requirement that established vaccines such as Pfizer-BioNTech, Moderna, and Johnson & Johnson go through a clinical trial in India before authorization, paving the way for the country—which urgently needs more vaccine—to import more doses, according to Reuters.

Japanese officials are considering extending state of emergencies across most of the country and are expected to make an announcement tomorrow, according to CNN. The country is still experiencing a surge of infections that is putting a strain on its health system, with the Tokyo Summer Olympics just 2 months away.

The head of the Japan Doctors Union today warned that it is dangerous to go ahead with the Tokyo Olympics, according to the Washington Post.

Meanwhile, at a summit between the European Union and Japan today that covered a host of issues, the groups said in part of a joint statement that they supported holding the Games in a safe and secure manner as a symbol of global unity in defeating COVID-19.