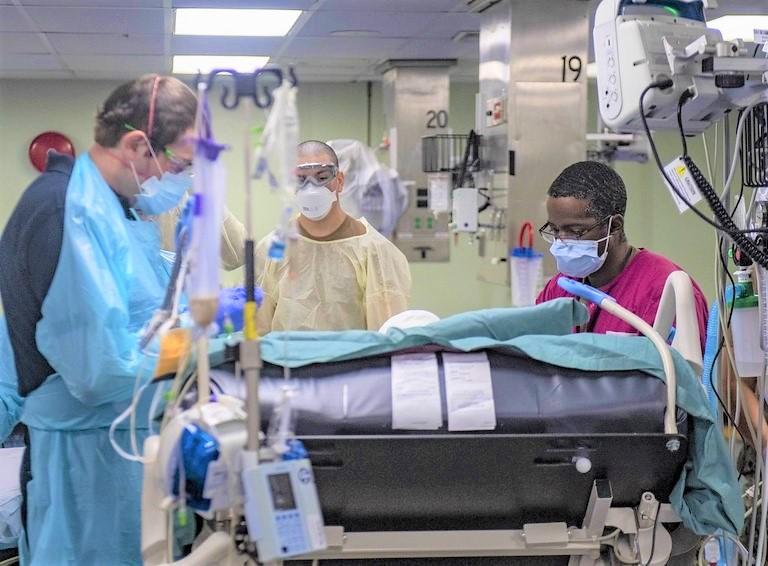 Infection with the Alpha (B117) SARS-CoV-2 variant may pose a heightened risk of poor COVID-19 outcomes, according to two observational studies from England and Denmark published yesterday in The Lancet Infectious Diseases.

In the first study, a team led by University of Oxford researchers studied data on a primary care cohort and a critical care group, both of which were infected by the Alpha variant and tested positive for COVID-19 from November 2020 to January 2021.

After adjusting for covariables, primary care patients infected with the Alpha strain were 65% more likely to die by 28 days than those infected by other coronavirus lineages. The Alpha variant was also associated with a doubled risk of requiring CCU admission (adjusted hazard ratio [aHR], 2.15), but the researchers note it was not linked to death or need for organ support in those receiving critical care.

In the CCU group, aHR for death was 0.91 for those with Alpha infections, compared with those with infections caused by other strains.

The researchers found no evidence of a significant association between Alpha infection and ethnic group, sex, or age, but patients with Alpha infections were slightly younger and more likely to be in the lowest body mass index category than those infected by other strains.

Severity of illness, as measured using the Acute Physiology and Chronic Health Evaluation II, tended to be reduced in Alpha-infected patients, but the proportion requiring mechanical ventilation in the first 24 hours of admission to the CCU was higher. By the end of the study period, 68.9% of Alpha patients had been released from the CCU, versus 91.7% in the non-Alpha group.

The researchers said that, combined with evidence of increased infectivity, the results highlight the importance of maintaining measures to control exposure to and infection with COVID-19.

"Although we observed a higher risk of severe outcomes (CCU admission and overall mortality) associated with lineage B.1.1.7, once a patient was in a condition severe enough to be admitted to CCU, their risk of dying was not different between lineages," the authors concluded. "The higher overall mortality and rate of CCU admission associated with lineage B.1.1.7, combined with its known increased transmissibility, are likely to put health-care systems under additional stress."

Led by researchers from the Statens Serum Institut in Copenhagen, the second study involved 30,572 COVID-19 patients with at least 14 days of follow-up data for hospitalization, virus genome data, and a positive COVID-19 test from Jan 1 to Mar 24, 6.6% of whom were healthcare workers.

The number of COVID-19 hospitalizations fell during the study period, but the proportion of patients with the Alpha variant rose steeply, from 3.5% in week 1 to 92.1% in week 10. Alpha was linked to a 0.79 crude risk ratio (RR) for hospitalization and an adjusted RR of 1.42.

The RR rose in all age-groups and calendar periods, the two biggest confounding factors. "The fact that our estimates are robust when stratifying for calendar period supports the hypothesis that the increased burden at hospitals at the beginning of the study period was unlikely to have biased our results," the researchers said.

Healthcare workers infected by Alpha were at higher risk for hospitalization than patients from the community.

Patients 60 years and older were less likely than younger age-groups to have an Alpha infection, as were women and those with underlying medical conditions. Proportions also varied among different geographical regions. In hospitalized patients, the proportion with Alpha infections was lower in those 60 and older than among younger age-groups but didn't differ by sex.

"Infection with SARS-CoV-2 lineage B.1.1.7 was associated with an increased risk of hospitalisation compared with that of other lineages in an analysis adjusted for covariates," the authors wrote. "The overall effect on hospitalisations in Denmark was lessened due to a strict lockdown, but our findings could support hospital preparedness and modelling of the projected impact of the epidemic in countries with uncontrolled spread of B.1.1.7."

In a commentary on the Danish study in the same journal, Muge Cevik, MD, of the University of St. Andrews in Scotland, and Sharmistha Mishra, MD, PhD, of the University of Toronto, issued three caveats in attempting to use surveillance data to tie an increase in disease severity to a variant that also spreads more easily.

When weighing the findings, they said, it's important to take into account the overlap of potential confounders that increase infection risk with those that increase illness severity (eg, age, underlying diseases), regardless of virus strain. Likewise, selection biases could interfere with valid inference of relative severity risks. Last, if a lineage becomes dominant in an area, a comparison of the Alpha strain with previous infections with other lineages could be limited.

"The mechanisms by which increased transmission potential might challenge our ability to estimate attributable severity further emphasise the crucial role that increased transmissibility potential plays in hospitalisations and mortality—irrespective of any direct effect of the variant on severity," Cevik and Mishra wrote.

"Careful consideration of all three potential challenges requires detailed data and a systematic approach to matching or adjusting for confounding," they added. "Not all surveillance systems can support this, and an investment in data platforms that enable rapid and robust analyses of relative transmission potential and relative severity remain crucial as new variants emerge."