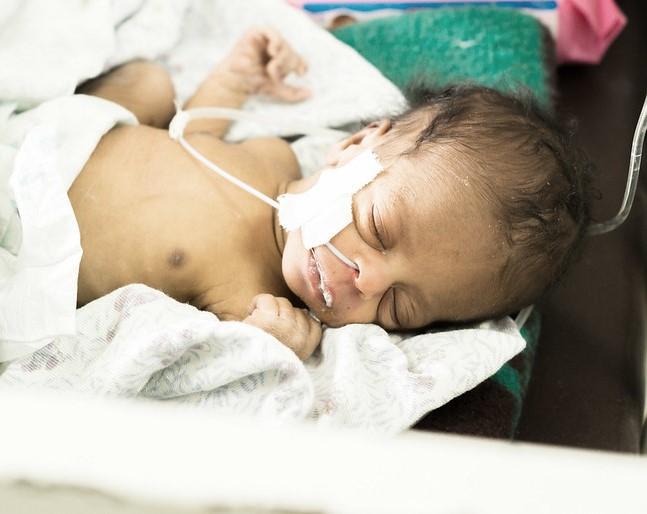 A large observational study of newborn babies with sepsis shows the impact that antimicrobial resistance (AMR) is having on this vulnerable population.

The study, led by the Global Antibiotic Research & Development Partnership (GARDP), looked at mortality, antibiotic treatments, and resistance among more than 3,200 newborns with suspected neonatal sepsis at hospitals in 11 countries and found that more than 11% died during the study period. The mortality rate ranged from 1% to as high as 27%.

The study also found that World Health Organization (WHO)-recommended first-line treatment for neonatal sepsis was used less than 13% of cases, and second-line treatments were used even less frequently. Many hospitals were using combinations of antibiotics, without much underlying data to support their use, because of high levels of resistance and multidrug resistance.

Among the antibiotics used were carbapenems and polymyxins—two broad-spectrum, last-resort classes of antibiotic that are needed for the most difficult-to-treat infections.

The authors of the study, the findings of which were released in a report today by GARDP and presented at the recent European Congress of Clinical Microbiology & Infectious Diseases (ECCMID 2022), say the data could help guide development of antibiotic treatments specifically for newborns.

Despite great improvements in mortality for children under 5, sepsis remains a leading cause of death in young children. The Global Burden of Disease study published in 2020 estimated there were 20.3 million sepsis cases worldwide in children under 5 in 2017, and an estimated 2.9 million deaths. The highest incidence and mortality was seen in newborns, with the biggest impact seen in low- and middle-income countries (LMICs) in sub-Saharan Africa and Asia.

The WHO recommends a standard empiric treatment of ampicillin plus gentamicin for neonatal sepsis, which needs to be administered within hours to prevent tissue damage, organ failure, and death in newborns, whose immune systems aren't developed enough to fight off dangerous pathogens. But that recommendation is based on data from high-income nations; there is little data on how neonatal sepsis is treated in LMICs, where multidrug-resistant pathogens are more prevalent and access to diagnostics is limited.

To get a clearer picture of neonatal sepsis mortality and treatment around the world, GARDP, along with researchers from Penta Child Health Research; St. George's, University of London; the Medical Research Council Clinical Trials Unit at University College London; and the University of Antwerp looked at data from 19 hospitals in 11 high-, middle-, and low-income countries across 4 continents. The study included 3,204 newborns hospitalized for less than 60 days with a primary diagnosis of sepsis from August 2018 through February 2020.

Mortality at 28 days was 11.3%, and rose to 17.7% for cases where a pathogen was cultured from blood samples. More than half (59%) of infection-related deaths were caused by a hospital-acquired infection. The most common baseline pathogen detected was Klebsiella pneumoniae.

Analysis of antibiotics started within 24 hours of baseline blood culture showed wide variation across hospitals, with ampicillin plus gentamicin administered in only 12.8% of cases. More than 20 other combinations of antibiotics were used. The most common treatments were those offering some activity against extended-spectrum beta-lactamase (ESBL)-producing bacteria and/or Pseudomonas infections, which accounted for a third of cases.

They also found high rates of resistance to the second-line treatment, cefotaxime. In the K pneumoniae isolates, resistance to meropenem was over 25%.

The study authors say the findings highlight both the need for updated antibiotic treatment guidelines for neonatal sepsis, and the overall lack of treatment options for newborns with multidrug-resistant infections.

"Our study has shown that antibiotic resistance is now one of the major threats to newborn health globally," principal investigator Mike Sharland, MD, of St. George's, University of London, said in a GARDP press release.

"There are virtually no studies underway on developing novel antibiotic treatments for babies with sepsis caused by multidrug-resistant infections. This is a major problem for babies in all countries, both rich and poor."

Based on the findings, the researchers have developed a neonatal sepsis severity score, which they say could be applied by clinicians to identify high-risk cases who might benefit from treatment change. The score is based on 10 clinical signs that were independently associated with higher risk of mortality.

GARDP is also using the data from the study to inform planning of an interventional trial that will examine the safety and effectiveness of commonly used antibiotics for neonatal sepsis, along with three potential new treatments—fosfomycin, amikacin, and flomoxef—that have shown promise when used in combination. That trial is expected to launch later this year in Kenya and South Africa, with the main trial scheduled for 2023.