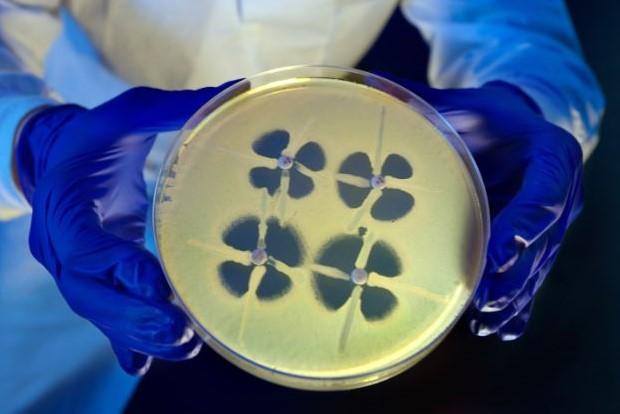 The telltale cloverleaf pattern of CRE on a Hodge test., CDC / Melissa Dankel

A report today from the Centers for Disease Control and Prevention (CDC) on a small outbreak of carbapenemase-producing carbapenem-resistant Enterobacteriaceae (CP-CRE) at a Kentucky hospital in 2016 highlights multiple introduction of the worrisome pathogen in a rural facility and demonstrates the possible role of cleaning equipment.

The investigation by physicians and epidemiologists from the CDC and the Kentucky Department of Health, appearing today in the CDC's Morbidity and Mortality Weekly Report (MMWR), describes an outbreak that started on Aug 11, 2016, when two Klebsiella pneumoniae carbapenemase (KPC)-producing isolates from clinical cultures were reported from patients in a small community hospital in rural Kentucky.

Over the next 4 months, scientists identified an additional 21 CRE isolates from patients at the hospital via screening and clinical cultures. The investigators believe organisms were imported into the facility and then spread among patients.

CRE have been dubbed "nightmare" bacteria because they are resistant to most antibiotics and spread easily from person to person in hospital settings. In addition, carbapenem resistance mechanisms like KPC—the most common carbapenemase enzyme found in CRE samples in the United States—are carried on mobile pieces of DNA called plasmids and can be shared with other types of bacteria, potentially driving wider and more rapid spread of carbapenem resistance. The CDC estimates that more than 9,000 healthcare-associated CRE infections occur each year in the United States.

Invasive CRE infections can be severe and deadly in critically ill patients, with mortality rates as high as 50%. More often, however, patients identified as CRE carriers are asymptomatic. But these colonized patients can still transmit the organism to other patients.

Of the 23 CP-CRE isolates identified, 17 (74%) were detected through screening cultures and the rest from clinical cultures. Further analysis of 14 available isolates revealed that 12 were K pneumoniae and two were Escherichia coli; in addition, 13 of the isolates produced the KPC enzyme and one produced the New Delhi metallo-beta-lactamase enzyme.

Pulsed-field gel electrophoresis identified three indistinguishable pairs of isolates that were isolated from patients who had exposure, based on medical chart review and patient interviews, to the emergency department or to the same medical-surgical ward. The investigators believe that's an indication that CP-CRE transmission occurred in these units.

Interviews with 13 of the patients also revealed that five had received healthcare outside the local area. The investigators suggest that 3 of these patients may have introduced CP-CRE into the facility; 2 had CRE identified at screening admission. But environmental cultures also identified CP-CRE on an emergency department environmental services cart and in a floor sink drain in a closet in the involved medical surgical ward.

The authors of the report say their investigation highlights the potential role of cleaning equipment, which frequently moves between patient rooms, in CP-CRE spread. In addition, they note that although there is a low prevalence of CP-CRE in rural areas, rural hospitals should be aware that patients who've also accessed healthcare in areas with higher CP-CRE prevalence—primarily urban areas—can introduce these organisms into their facilities.

The authors suggest that the facility initiate CRE surveillance in patients with known exposure to healthcare in areas with higher CP-CRE prevalence, reinforce daily and terminal cleaning practices, and work with other facilities in their patient-sharing network to implement a CP-CRE control strategy.

Jan 5 MMWR Notes from the Field