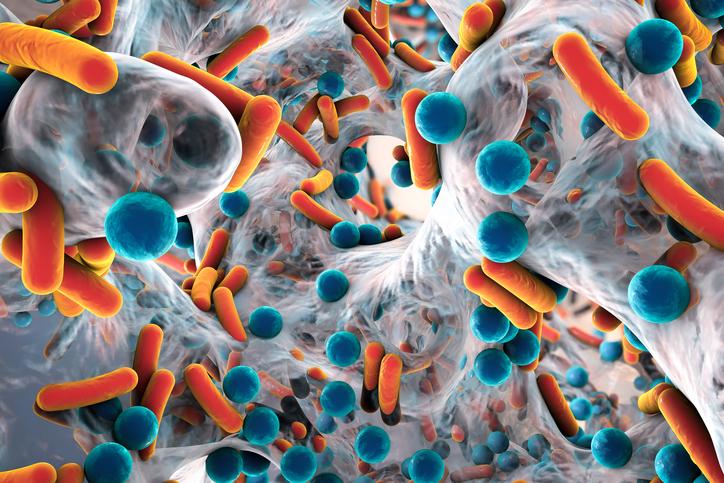 Scientists in the Netherlands are reporting early but promising results for an antibiotic alternative that's highly effective against gram-positive and gram-negative pathogens.

In a study yesterday in Science Translational Medicine, a team led by researchers from Leiden University Medical Center report that the drug candidate, SAAP-148, killed several types of multidrug-resistant pathogens in lab cultures and was able to eliminate biofilm-associated skin infections in human skin and mouse models. A phase 1 clinical trial of a gel containing SAAP-148 that could be used as a topical treatment for wound infections is planned for this year.

SAAP-148 is one of several synthetic compounds derived from the human antimicrobial peptide LL-37, which plays a key role in the immune system's response against bacterial infections.

Antimicrobial peptides have long been considered to hold potential as a novel class of antibiotics because they can kill a wide range of immune system invaders, including viruses and fungi, and have shown effectiveness against pathogens resistant to almost all conventional antibiotics. Because of its ability to kill bacteria by latching on to the bacterial membrane and making it permeable, LL-37 has been a particular focus for researchers.

While some derivatives of LL-37 have also shown broad bactericidal activity in the lab, they have been less effective when tested in the presence of biological fluids such as human plasma, wound fluid, or urine. But screening a panel of LL-37 derivatives and other synthetic antimicrobial peptides against Staphylococcus aureus and Pseudomonas aeruginosa in fluids containing 50% human plasma and physiologic levels of salt and proteins (which mimic conditions in the human body) revealed that SAAP-148 didn't have that problem.

With those results, the team decided to test SAAP-148 against a panel of the ESKAPE pathogens, which include Enterococcus faecium, S aureus, Klebsiella pneumoniae, Acinetobacter baumannii, P aeruginosa, and Enterobacter species. These drug-resistant organisms are the leading cause of healthcare-associated infections and are becoming increasingly resistant to antibiotics. They are among the pathogens prioritized by the World Health Organization for antibiotic development.

The synthetic compound proved highly effective against those pathogens, as well as isolates of Escherichia coli, K pneumoniae, and Enterobacter cloacae that were resistant to the last-resort antibiotic colistin. Further testing showed that it was also able to eradicate and prevent the formation of biofilms, which are complex communities of bacteria and other microorganisms that can form on wounds and indwelling devices and be highly drug-resistant. SAAP-148 eradicated established biofilms of S aureus and A baumannii on a plasma-coated surface.

The ability to eradicate biofilms is important, the researchers explain, because they are an important cause of chronic and recurring bacterial infections yet have been overlooked in antibiotic research. In addition, biofilm-encased bacteria can be 10 to 1,000 times more resistant to antibiotics than free-floating bacteria. Biofilms can be particularly problematic for patients with chronic wounds, like diabetic foot ulcers, and burns.

"These indications are very difficult to treat with conventional antibiotics due to the presence of biofilms," study co-author Anna de Breij, PhD, an infectious disease researcher at the University of Leiden Medical Center, told CIDRAP News. "The antibiofilm activities of SAAP-148 are essential."

When de Breij and her colleagues tested a gel containing SAAP-148 on acute and biofilm-associated wound infections caused by methicillin-resistant S aureus (MRSA) and A baumannii in ex vivo human skin and mouse skin models, the gel was highly effective within 4 hours, completely eradicating A baumannii in 50% of the human skin samples and MRSA in 87% of mice. Tests of topical application on rabbit skin indicated that use of SAAP-148 in an ointment is safe.

SAAP-148 also demonstrated the ability to eliminate persister cells, which are bacterial cells that are resistant to antibiotics but exist in a dormant state and don't grow in their presence. Persister cells are believed to be a factor in the recurrence of biofilm-associated infections.

Another potential benefit of the drug that was revealed in the tests is the lack of resistance development. When the researchers performed serial passaging—a process of growing bacteria in the presence of antibiotics to see how they evolve—in MRSA, A baumannii, and E coli with sub-inhibitory concentrations of SAAP-148, no resistance was observed. De Breij said this is related to how quickly the peptide kills bacteria.

"An important feature of the SAAPs is that they have a very high intrinsic barrier to resistance development, as they act very rapidly on the membrane of the bacteria," she said. "This makes them very suitable candidates for the treatment and prevention of chronic infections, in which prolonged treatment is indicated."

De Breij added that she and her colleagues will continue to assess for resistance development after prolonged use.

For now, the researchers are preparing for the first clinical proof-of-concept studies for the SAAP-148 topical gel in treating chronic wounds and burns, and for a nose gel treatment for nasal MRSA carriers. But the hope is that antimicrobial peptide-based products could be used for other indications.

"To this end, we intend to develop intelligent formulations (nanoformulations) for the peptides, which will allow us to further develop SAAP-148 for deep-skin penetration and systemic infections," de Breij said via email.