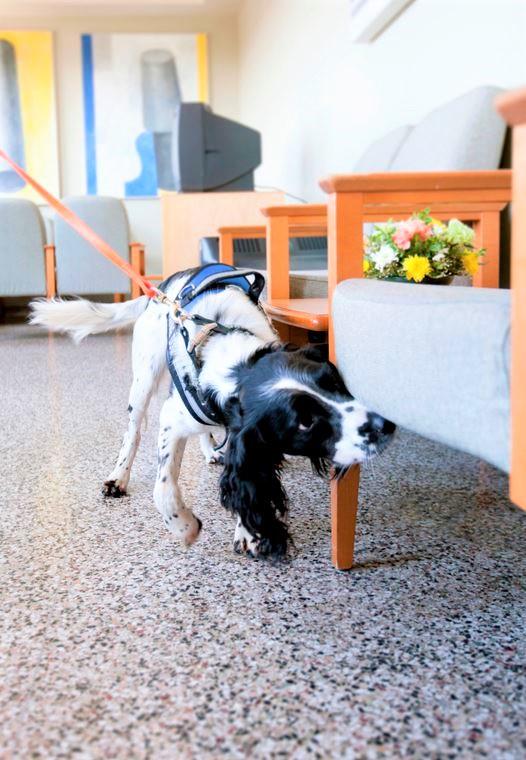 Angus, a 5-year-old English springer spaniel, doesn't know the havoc that Clostridioides difficile can wreak. But he knows that when he finds the scent of the deadly bacterium at Vancouver General Hospital, he'll get a reward.

"Only one odor in the world is important to him, and that's C diff," say his handler, Teresa Zurberg.

Angus and Zurberg, who works in patient quality and safety at the hospital, are part of a canine scent-detection program started in 2016 to detect C difficile on equipment and environmental surfaces at the hospital. When Angus detects the diarrhea-causing pathogen on a nursing station or in a hallway, his sniffing grows more intense. If Angus sits, lies down, or starts pacing back and forth, Zurberg knows he's found what he's looking for.

Then Angus gets paid.

"It's all a game," Zurberg says. "Angus knows that if he finds that odor, he gets what he really wants, which is either the toy in my back pocket or the treat in my hand."

Hot on the trail of C diff

It may be a game for Angus, but for hospitals, C difficile is serious business. Linked to rising use of broad-spectrum antibiotics, which can wipe out a patient's normal gut bacteria and allow the bacterium to multiply and produce toxins that inflame the colon, C difficile infections are the leading cause of hospital-acquired diarrhea in the world.

The Centers for Disease Control and Prevention estimates that each year C difficile causes more than 450,000 infections in US hospitals, is associated with more than 29,000 deaths, and costs the US healthcare system nearly $5 billion.

One of the main reasons C difficile has become such a burden for hospitals is that it spreads easily—typically through contact between sick patients and healthcare workers—and it's very hard to get rid of.

"C difficile is particularly problematic because it can produce spores and can persist in the environment for long periods of time, and it's recalcitrant to a lot of our regular hospital disinfectants and disinfection procedures," says Elizabeth Bryce, MD, a clinician at the hospital and a director of infection control for Vancouver Coastal Health, the regional health authority. "It's particularly problematic when a patient acquires it, because although you can have mild cases, you can also get life-threatening disease. So it behooves us, for the sake of our patients, to do something about this."

Zurberg, who's been training bomb- and narcotics-detecting dogs for years, knows all about how dangerous C difficile can be. Six years ago, she got a C difficile infection after being treated for a leg wound with high doses of intravenous antibiotics. "I lost about 20 pounds in a week…and to this day, I still have lasting effects from having C diff," she says.

It was about a year after that experience that Zurberg's husband, who also works at Vancouver General Hospital, came to her with an article about a dog at a Dutch hospital who had been trained to detect C difficile in patients. That's when they came up with the idea of training dogs to sniff out the pathogen in the environment and presented it to the hospital's executive team.

"We were intrigued, both in the patient safety department and in our infection control division," says Bryce. "We thought this was worthwhile."

Once a month, Zurberg and Angus—along with another scent-detection dog, Dodger, and his trainer, Jaime Knowles—search every clinical unit and area at the hospital, focusing on areas of higher risk, including parts of the hospital with the highest rates of C difficile and those with new

cases. They start with a quality control assessment, using hidden scent pads that capture the odor of C difficile cultures (but don't contain spores) and scent pads with a different odor.

"We want to make sure they're on track and on scent," says Bryce. "We have to make sure, in the small area that they search, that they hit on the positive but not the negative."

Then the dogs and their handlers head out to the rest of the hospital, accompanied by a member of the environmental cleaning services staff. Once the dogs find the scent and alert their handlers, the item or area is cleaned and disinfected with hydrogen peroxide and ultraviolet C light.

"We take care of everything in the moment," Zurberg says.

As a recent study published in the Canadian Journal of Infection Control demonstrates, Angus and Dodger's scent-detection capabilities have helped the staff at Vancouver General Hospital gain some new insight into where C difficile is hiding out in the hospital, and how it's spreading to those places.

One thing they learned is that patient rooms aren't the only environmental reservoir for the pathogen.

Over an 18-month period, a research team that included Bryce and Zurberg found that, of 391 positive alerts from Angus and Dodger (out of 659 searches), 321 (82.1%) were in the general hospital environment, mainly on hallway items. More than half of the hits in the general environment (192/321, 59.8%) were on items almost exclusively handled by healthcare workers, such as carts, equipment that measures and monitors patient vital signs, and staff lockers. There were also alerts in areas shared by the public, including waiting rooms and public bathrooms.

"These are areas where multiple people touch multiple things, so they would have some of the highest contact with hands…hands of healthcare workers, patients, and visitors," says Bryce.

"This study showed just how widespread C difficile is in the environment," says Karen Hoffman, RN, current president of the Association for Professionals in Infection Control and Epidemiology.

For Bryce and Zurberg, a bigger benefit of the program is that it's a real-time infection control strategy that puts a spotlight on problem areas and sparks immediate discussions about transmission pathways and cleaning strategies. "The value of this program is that it allows us, in a totally non-punitive, non-judgmental way, to just re-engage everyone and use some in-the-moment teaching," Bryce says.

"It makes everything we've tried to teach staff, patients, and family tangible," Zurberg says. "When people see the dogs alert in real time…it opens up lines of communication that may have not been there, starts conversations that may not have been started otherwise, and makes people aware of what their practices are."

Hoffman says this kind of immediate feedback is crucial, given that other C difficile detection methods, such as environmental sampling, take much longer. "Sometimes we need out-of-the-box approaches, because C difficile continues to be a leading cause of morbidity and mortality in healthcare facilities. I think any effort to control C difficile would benefit from some real-time environmental detection.

"I think it has a lot of potential for preventing cross-transmission and even for controlling outbreaks," she adds.

Bryce estimates that since the program started in 2016, the number of C difficile cases at the hospital has been cut nearly in half, although she cautions that the reduction could be the result of a confluence of factors.

"All of this in-the-moment teaching improves hand hygiene, it improves general infection prevention practices, and it improves the appropriate use of barrier protection, like gloves," she says. "So we're very cautious in saying this is solely due to the dogs."

While the program is based at Vancouver General, the scent-detection teams also do monthly searches in the other Vancouver Coastal Health hospitals, and have visited more than 30 Canadian healthcare facilities to do assessments. And they're adding a new member to the team—Rudy, who just passed his scent recognition test.

Bryce says that going forward, they plan to do further research to pinpoint what exactly the dogs are smelling, and determine how sensitive their noses are to the scent. They also want to grow the program.

"We're really eager to collaborate with other hospitals," she says.