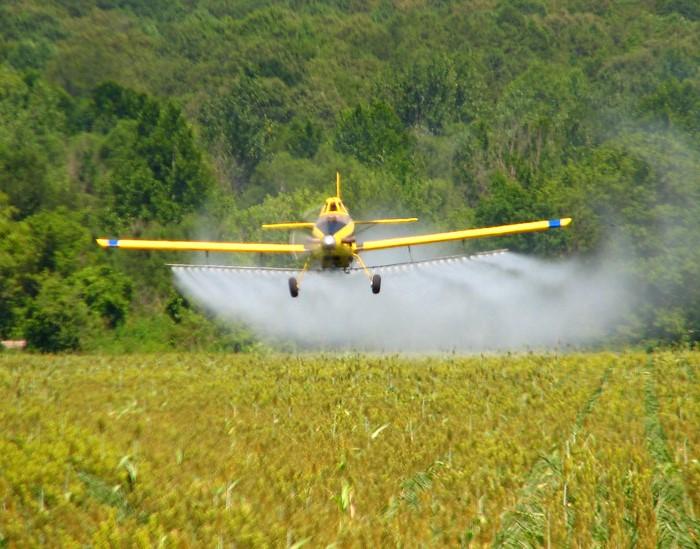 Public records obtained by the Center for Biological Diversity indicate that a trade group that represents the pesticide industry helped shape the US government's position on international guidelines for monitoring foodborne antimicrobial resistance (AMR).

Emails between officials with the US Department of Agriculture (USDA) and representatives of CropLife America, obtained by the Center for Biological Diversity through the Freedom of Information Act, show a concerted effort by the trade group, and other agribusiness groups, to urge the removal of language regarding crops and fungicides from draft guidance created by the Codex Intergovernmental Task Force on Antimicrobial Resistance.

That guidance, which is still being finalized, will provide standards for how countries should monitor, and try to minimize, AMR in food. It will eventually be incorporated into the Codex Alimentarius, a collection of voluntary standards and codes of practice that guide safe and fair food practices in international trade.

The email exchanges between US officials and CropLife representatives in 2018 show that the trade group was particularly concerned about any references to fungicides in the task force recommendations.

"I want to make certain I am correct in assuming that this document and associated comments do not address fungicide use," Ray McAllister, PhD, senior director of regulatory policy for CropLife America, wrote to officials with the US Codex Office in March 2018, in response to their request to review and provide feedback on US edits and comments on the Codex task force's "Draft Guidelines on Integrated Monitoring and Surveillance of Foodborne Antimicrobial Resistance."

The US Codex Office is housed in the USDA and manages all planning, policy development, and support for US involvement in the Codex Alimentarius Commission (CAC), a body established by the United Nations Food and Agriculture Organization and the World Health Organization in 1963. The CAC includes 188 member countries, along with more than 200 food industry and consumer groups. Although Codex standards are voluntary, many countries incorporate them into their food safety laws.

According to the USDA website, the mission of the US Codex Office is "to engage stakeholders in the development and advancement of science-based food standards for the benefit of the United States and the worldwide community," and to develop strategies to achieve US objectives.

The United States has historically had a strong role in setting Codex policy, according to Gail Hansen, DVM, MPH, a veterinary and public health consultant.

"The United States has really had a big voice in what the final documents look like," Hansen says.

The emails also show that CropLife, along with the California Citrus Quality Council, was opposed to even including discussion of crops in the document at all. McAllister said he doubted that monitoring crops for drug-resistant pathogens would serve any public health purpose, and was skeptical that antibiotic-resistant human pathogens are going to originate from crops.

USDA officials noted that other countries had pushed to have crops included, and that the United States would likely be isolated in its position.

"While I understand that you all have concerns about mixing crop information into this document, unfortunately, that only seems to be the opinion of the US and we will be isolated," Neena Anandaraman, DVM, MPH, an adviser within the USDA's Office of the Chief Scientist, responded. "So completely removing references to crops is a failing option."

But ultimately that was the US position. US Codex Office edits on the draft document called for removing references to monitoring and surveillance of crops and the environment. "At this point, data on the occurrence of AMR in/on crops or in the environment are lacking, and the impact of AMR in crops or the environment on foodborne AMR is too difficult to discern," US officials wrote in the comments section. They argued that foodborne AMR surveillance should focus on resistant bacteria in humans, food animals, and retail meats.

A USDA report on a subsequent meeting of the Codex task force indicated that several countries wanted to keep crops in the text, and no consensus was reached by the task force. As a result, no language recommending monitoring for AMR in crops was included in the draft recommendations.

In 2019, however, after another round of edits, the Codex task force ultimately decided to include crops in its "Draft Guidelines on Integrated Monitoring and Surveillance of Foodborne Antimicrobial Resistance," and broadened the scope of those guidelines to include antifungals. The guidelines are expected to be finalized next year.

Concerns about antibiotic use in crops

Although the US Codex Office appears to have ultimately been unsuccessful in its attempts to remove references to crops and antifungals from the Codex guidelines, Nathan Donley, PhD, a senior scientist with the Center for Biological Diversity, says the emails point to a troubling level of influence from the pesticide industry.

"The USDA was basically looking for edits and approvals of their baseline position, as a member of the task force, from CropLife and some other agricultural industries that use antibiotics as pesticides," said Donley. "There's a whole paper trail…that really painted an awful picture about industry influence in government."

While the amount of antibio

tics used in food crops is much smaller than the amount used in human or veterinary medicine, international concern about AMR is bringing attention to all the ways in which antibiotics—especially those antibiotics that are needed in human medicine—are used. Much of that attention has focused on the widespread use of antibiotics in food-producing animals.

But in recent years, the US Environmental Protection Agency's decision to allow for expanded use of the antibiotic oxytetracycline on citrus farms to prevent citrus greening disease, and consider expanded use of streptomycin, has brought new attention to the use of antibiotics on crops. Public health and environmental groups have expressed concern that spraying massive amounts of antibiotics on citrus trees could pose a threat to human health by selecting for antibiotic-resistant bacteria in the soil, which could then share resistance genes with pathogens that cause disease in humans and animals.

Oxytetracycline and streptomycin are also used to combat bacterial diseases that strike apple and pear trees, and streptomycin is applied to tomato seedlings in greenhouses before the plants are transplanted to fields.

"Compared to how much [antibiotics] are used in humans and animals, it's a smallish amount, but it's still a lot, and it gets into the environment just as easily," said Hansen. "So it's just adding to the problem of antibiotic resistance."

Infectious disease and AMR experts have also warned that widespread use of fungicides on agricultural crops may be contributing to antifungal resistance in fungal pathogens that cause human infections. Donley says that's one of the reasons the email exchanges are troubling.

"We're finding out more and more that antifungal or fungicide use in agriculture use can really be facilitating resistance to some of these drugs," he said. "So I think antifungal and fungicide use really needs to be monitored closely to be sure they're not making an already bad problem even worse."

David Wallinga, MD, a senior health officer with the Natural Resources Defense Council whose work focuses on antibiotic use in the livestock sector, says the email exchanges underscore his concern that federal agencies aren't doing enough to reduce unnecessary antibiotic use in agriculture.

"Antibiotic overuse is a major driver in the global spread of antibiotic-resistant 'superbug' bacteria," Wallinga said. "Although the United States has a National Action Plan to combat antibiotic resistance, the response from US officials to this public health threat is inadequate—particularly when it comes to regulating the rampant use of antibiotics in agriculture."

Wallinga said these agencies should be working with agribusiness companies and the international community to cut unnecessary antibiotic use and set more ambitious targets and oversights to help control the spread of resistance.

The USDA did not respond to a request for comment for this story.