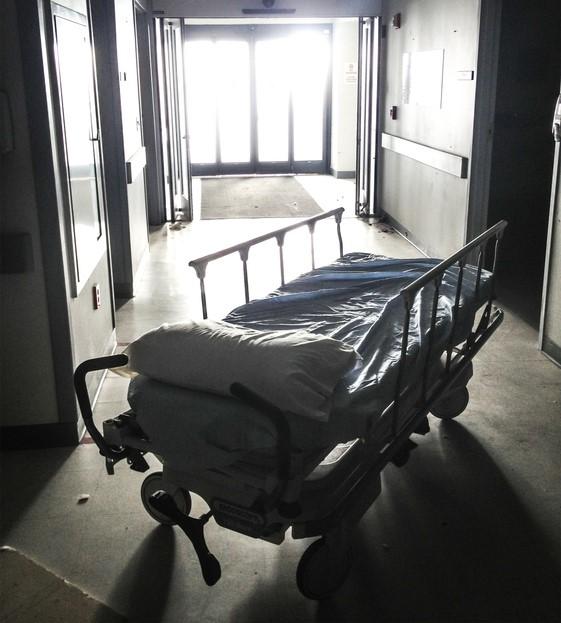 By September of 2013, disease had already punished Meredith Littlejohn's body. A drug-resistant infection was the last thing she needed.

Nearly 10 months earlier, Meredith, a high school senior in St. Louis with college plans and a bright future, had been diagnosed as having acute myeloid leukemia.

After four rounds of chemotherapy, her cancer went into remission, and it looked as though she would be able to resume her path. She attended her senior prom, graduated with her class in the spring, and start planning for her freshman year at Emory University in Atlanta.

But the cancer returned in June, and with more rounds of chemotherapy, Meredith's immune system became more and more compromised. In August she contracted a fungal infection, which her doctors were able to control only after trying several different combinations of drugs. Then in September the doctors found a Pseudomonas infection under her arm.

Pseudomonas aeruginosa is a common pathogen in hospitals, known for its ability to survive in harsh environments and cause severe infections. And it's become increasingly drug-resistant, acquiring an array of different weapons to help it fend off antibiotics.

In Meredith's case, the Pseudomonas infection didn't respond to several newer antibiotics, but it remained localized. As a stand-by, her doctors were prepared to use colistin—a last-resort antibiotic with an extremely toxic effect in kidneys—in the event the infection worsened.

Meredith wasn't done fighting. In October she received a successful bone marrow transplant, and things were starting to look up. But the Pseudomonas infection persisted and began to spread, and colistin didn't help. First it invaded her lungs, then her bloodstream, causing septic shock.

The doctors were able to resuscitate her the first time, and then again when she went into septic shock the next day. But when septic shock assaulted her body a third time, they weren't able to save her. Meredith Littlejohn died in November 2013, at the age of 19.

"She was just a wonderful, special young woman," her father, Stephen Littlejohn, said in an interview. "We just miss her terribly."

Are the CDC's numbers accurate?

Meredith Littlejohn was just one of millions of Americans who experience complications from an antibiotic-resistant infection each year. These infections place a substantial clinical, emotional, and financial burden on patients, their families, and the US healthcare system.

But just how many people in the United States are dying from antibiotic resistance? Many researchers and epidemiologists wrestle with that question.

For several years now, the most frequently cited number has been 23,000 deaths a year, a figure put forward by the US Centers for Disease Control and Prevention (CDC) in a 2013 report on the most dangerous antibiotic-resistant pathogens. The CDC calculated that number—and the estimate of more than 2 million illnesses a year caused by antibiotic-resistant bacteria—using data from the National Healthcare Safety Network, the Emerging Infections Program, the National Antimicrobial Resistance Monitoring System, the National Center for Health Statistics, and hospital surveys.

The aim of the report, the CDC wrote, was to raise awareness of the threat that antibiotic resistance poses and summarize what is known about the burden of illness.

It's a number that Jason Burnham, MD, an infectious disease specialist at Washington University School of Medicine in St. Louis, has often used in research papers and grants. But the number has never seemed quite right to him.

"I see people die of these infections all the time, and when the CDC says there are 2 million illnesses and only 23,000 deaths, that math just doesn't add up," Burnham told CIDRAP News.

The CDC wouldn't necessarily dispute this idea. In fact, CDC experts note in the report that the numbers are "based on conservative assumptions and are likely minimum estimates." The problem is that the best sources of data available at the time may have revealed only part of the problem.

"It's really a constellation of a lot of different organisms and the resistances to them, and those resistances and those organisms are incredibly varied," Craig said. In addition, there are different surveillance systems for tracking the different resistant organisms. The CDC report tried to capture some of this variation, focusing on the resistant pathogens that cause the most severe infections—including carbapenem-resistant Enterobacteriaceae, methicillin-resistant Staphylococcus aureus, and multidrug-resistant Pseudomonas aeruginosa—and estimating illnesses and deaths caused by each of those pathogens.

"We were trying to make a unified statement about the burden of drug resistance for this varied constellation of pathogens," Craig said.

Another problem is that what's recorded on a death certificate doesn't always tell the full story of how, and why, a patient died. A drug-resistant infection might not get noted, especially if a patient had an underlying health issue.

"You know, the people who tend to fill those out, at least in the teaching hospitals, are interns and residents with very little time," Burnham explained. "It's 2 in the morning and someone's bringing you a death certificate, and you're just like, 'Okay, they had cancer? That'll do.' "

Michael Bell, MD, deputy director of the Division of Healthcare Quality Promotion at the CDC, agrees. He contrasts death data with birth data, which is based on an event that generally happens in a controlled setting, with people present to record it. "Death data is very different," he said. "We don't have that degree of control about understanding when someone dies, how they die, where they die, and with whom they die."

There are other challenges in estimating US deaths from drug-resistant infections, including a lack of universal reporting of antibiotic-resistant pathogens and the absence of ICD-10 codes—the alpha-numeric codes used by physicians, health insurers, and public health agencies—that specifically denote diagnoses of multidrug-resistant infections, which are the most severe and life-threatening forms of bacterial infection.

Beyond that, there is also the question of whether a drug-resistant infection caused a patient's death, contributed to it, or was just one of many critical health issues they were facing. That's not an easy question to answer. Meredith Littlejohn's family, for example, views the resistant Pseudomonas infection as a complication associated with her leukemia and severely compromised immune system, and not as the cause of her death.

"Obviously, it's not a certainty that if we had had an effective alternative to colistin, that that would have made a difference," her father said. "Hers was a very complex case."

"All I can say is that we would have liked to have had something more effective at the time, in case it might have made a difference," he said.

"When you think about healthcare-associated infections and their relationship to causation of death, it gets pretty complicated pretty quickly, because a lot of these patients who die of infections, particularly multidrug-resistant infections, have pretty severe underlying disease" said James M. Hughes, MD, professor emeritus of medicine at Emory University and past co-director of the Emory Antibiotic Resistance Center.

"So teasing out in any individual patient whether the infection was the cause of death, contributed to the death, or was temporally associated—but not really directly related to the death—is difficult."

All these challenges and unknowns factored into the CDC's conservative approach. "We did what we could with the data we had available in 2013," Craig said. "And I think we did a decent job given the challenges that we faced—the challenges inherent in measuring all of these different pathogens that fall under the heading of antibiotic resistance."

Burnham and two colleagues from Washington University School of Medicine took a different approach, and ended up with a much higher estimate.

Their method, described in a letter published in November 2018 in Infection Control and Hospital Epidemiology, looked at the nearly 2.5 million inpatient and outpatient deaths in 2010. They used conservative estimates of deaths caused by sepsis (the body's overwhelming reaction to infection) and reported rates of multidrug resistance in US hospitals, along with estimates of outpatient deaths caused by infections, to calculate the number of patients who were likely to have died from multidrug-resistant infections.

"This didn't end up in the letter, but we did a review of the literature to look at death rates from resistant infections, and there's a huge range, depending on what study you look at and what the population is," he said. "We found that they were anywhere from 6% to greater than 50% or 60%...so we tried to pick a number that was reasonable."

"Hopefully, these numbers will open a lot of eyes from the clinical side, the research side, the public, and lawmakers, so they can recognize it as a problem," Burnham added.

People are taking notice. In the months since the letter was published, several articles about antibiotic resistance—both in mainstream news outlets and medical journals—have cited these numbers.

"I'm not surprised to see another group taking a very different approach to come up with new estimates," said Emory's James Hughes.

Neither are Michael Craig or Michael Bell at the CDC.

"We appreciate, given the level of concern that people have about antibiotic resistance, that there's going to be different points of view and different numbers that come out from time to time," said Craig.

"Whether it's 150,000, 250,000, or 23,000, I don't want anyone to die because we were unable to treat their infection," said Bell. "None of those are okay numbers, and the magnitude, while it makes good copy, is largely irrelevant to anyone who's infected with one of these pathogens."

"At the end of the day, the reality is probably somewhere in-between the CDC estimate and the high end of the Burnham et al estimate," said Hughes. "But where it is in-between, I don't know."

Hughes added that the takeaway for him from these two very different estimates is that researchers need to undertake a more concerted effort to establish a standardized methodology and approach to answering the question.

The CDC, for its part, will be coming out with a new estimate of illnesses and deaths caused by drug-resistant pathogens later this year, and Bell and Craig said the agency will have better data to work with and that the numbers in the new report are likely to be higher. This time around, researchers will be using electronic health records (EHR) data, which will provide more information about where and when infections occurred.

"Our hope, with the EHR systems that we're using, is that we're actually going to have more cross-cutting, comprehensive data," said Craig. "We're also going to have data directly from clinical laboratories that are doing the resistance testing. So, especially for healthcare-associated pathogens, we're going to have a higher degree of consistency and methodology."

While the numbers might be irrelevant to the patient suffering from a drug-resistant infection, everyone interviewed agrees they play an important role in helping raise awareness among hospital leadership, health officials, policymakers, and the public about the threat of antibiotic resistance, because awareness can mean more resources to fight the problem.

"If you think it's a small problem, you're going to deploy a small force to go against it. If you think it’s a huge problem, you're going to deploy something bigger," Bell said. "So whether you're a pharmaceutical company thinking about what your market share could look like, whether you're a governmental organization trying to understand what the on-the-ground investments should look like, whether you’re a legislator appropriating resources, those numbers matter."

"These kinds of estimates will have an impact on policy, on priority setting, on resource allocation, but also on monitoring trends over time, and providing a basis for evaluation of the impact of interventions going forward," said Hughes.

But for Meredith Littlejohn's family, what ultimately matters is that people understand that the threat posed by antibiotic resistance can affect anyone who gets a bacterial infection.

"Whether it's 23,000 deaths or 150,000, the chance that you or a loved one will contract an antibiotic-resistant infection has grown over the last number of years," her father said. "We're facing a situation where you can't assume that if you get an infection, especially a gram-negative infection, there will be an antibiotic that will take care of it."