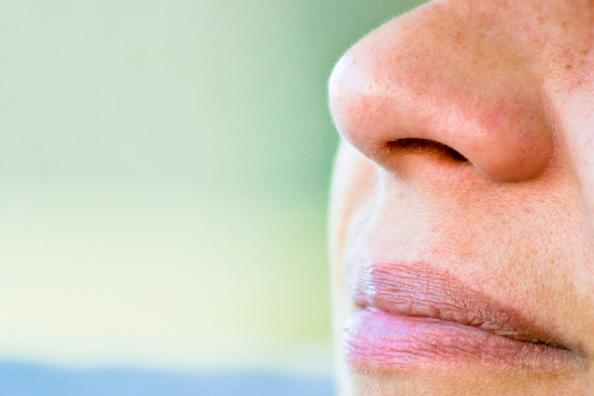 For decades, nearly all widely used antibiotics have come from bacteria found in soil. Now it turns out a new source of antibiotics may be within sniffing distance.

That's according to a new study published in Nature by a team of German researchers who were looking to identify why the bacteria Staphylococcus aureus—which can cause severe infections when strains such as methicillin-resistant S aureus (MRSA) enter the body—are present in the nostrils of roughly only one in three people. Their theory was that other bacteria may be competing with S aureus and crowding it out, but they didn't understand the mechanism behind it.

So, to figure out what might be preventing S aureus from colonizing in the nose, the researchers screened 90 nasal Staphylococcus isolates for antimicrobial activity against S aureus. What they found was that while most Staph species had no impact, one particular species—S lugdunensis—was particularly good at killing off S aureus strains, including MRSA. Upon further investigation, the researchers discovered that a strain of S lugdunensis produces an antibacterial compound, which they coined lugdunin.

In tests performed on mice whose skin was infected with S aureus, lugdunin strongly reduced or eliminated the infection both on the surface and in the deeper layers of skin. And when the researchers colonized the noses of cotton rats with S lugdunensis, they found that after 5 days it significantly reduced the presence of S aureus.

To investigate whether S lugdunensis can affect colonization by S aureus in the human nose, the researchers examined nasal swabs from 187 hospitalized patients. The swabs indicated that S aureus was present in about one third of all the samples, while S lugdunensis was present in less than 10%. Yet in the patients who tested positive for both strains of bacteria, the amount of S aureus found was six times lower than in those without S lugdunensis—suggesting the presence of the bacterium may be keeping S aureus at bay.

In vitro testing showed that lugdunin was also effective against other types of Gram-positive bacteria, such as vancomycin-resistant Enterococcus. In addition, S aureus did not appear to develop any resistance to the compound.

"This indicates that lugdunin has apparently evolved for the purpose of bacterial elimination in the human organism, implying that it is optimized for efficacy and tolerance at its physiological site of action," the authors wrote.

A new avenue for antibiotic discovery

The study is promising for several reasons. MRSA is a common and serious threat, both in hospitals and the community. While MRSA most often causes mild skin infections, it can lead to severe and deadly infections in patients with weak immune systems.

The Centers for Disease Control and Prevention (CDC) estimated that MRSA caused more than 80,000 infections and 11,000 deaths in 2011 (the last year for which statistics are available). Although lugdunin is a long way from becoming a viable treatment, the findings suggest the possibility of a new weapon against a pathogen that has become resistant to many drugs.

More significantly, at a time when antibiotic development has slowed and the need for novel antibiotics is becoming urgent, the findings suggest a promising new avenue for antibiotic discovery. As the authors noted, previous analysis of the human microbiome has identified genes living on and within the human body capable of producing antimicrobial substances. The drug lactocillin, for example, is produced from bacteria that live in the vagina. But this is the first time a study has documented the ability of bacteria to produce an antibiotic within the body that can act against other bacteria.

"These organisms, or the antibiotics they produce, might serve as drug-discovery leads," Northeastern University microbiologist Kim Lewis, PhD, wrote in a commentary accompanying the study.

Corresponding author Andreas Peschel, PhD, a microbiologist at the University of Tubingen in Germany, told Nature News that he and his colleagues are currently talking to companies interested in developing lugdunin for human use.