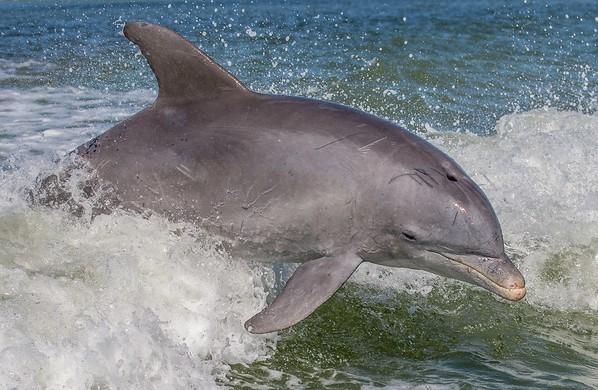 In 2009, Adam Schaefer, MPH, was part of a team that reported finding antibiotic-resistant bacteria in dolphins living in waters off the coast of Florida and South Carolina. Bacteria cultured from bottlenose dolphins in Florida's Indian River Lagoon, including human pathogens such as Escherichia coli and Staphylococcus aureus, showed high levels of resistance to multiple antibiotics used in human and veterinary medicine.

Ten years later, a new study led by Schaefer, an epidemiologist at Florida Atlantic University (FAU), has found that the levels of antibiotic resistance in bacteria isolated from dolphins in the lagoon have increased over time, and appear to be mirroring trends seen in human healthcare. Schaefer believes these findings highlight the impact that human antibiotic use is having on the aquatic environment.

"These dolphins aren't being prescribed antibiotics, so the bacteria that they have, theoretically we shouldn't be seeing all these increases [in resistance], but we are, and that's telling us that there is obviously a component where the environment that they're living in is being impacted," Schaefer said. "The dolphins are just telling us that story."

The findings appear in the journal Aquatic Mammals.

For the study, Schaefer and colleagues from FAU's Harbor Branch Oceanographic Institute, Georgia Aquarium, the Medical University of South Carolina, and Colorado State University analyzed bacteria samples collected from common bottlenose dolphins from 2003 to 2015 in the Indian River Lagoon, an estuary along Florida's Atlantic coast that's home to more than 4,300 animal and plant species. The analysis, a part of the bottlenose dolphin Health and Risk Assessment Project, included data from the 2009 study.

"Antibiotic resistance among potential pathogens and bacteria has increased over time, and we wanted to see if that same pattern that we're seeing in human and clinical cases is being reflected in dolphins," Schaefer said.

Among the 733 isolates collected from 171 dolphins over the study period, the most commonly isolated species were Aeromonas hydrophila, E coli, Edwardsiella tarda, Vibrio alginolyticus, and S aureus. Antibiotic susceptibility testing on the isolates showed that the overall prevalence of resistance to at least one antibiotic was 88.2%. The prevalence of resistance was highest to erythromycin (91.6%), followed by ampicillin (77.3%) and cephalothin (61.7%).

The analysis also found that the Multiple Antibiotic Resistance (MAR) index, a measurement that assesses overall antibiotic resistance and can be used to reflect potential human impacts on environmental isolates, increased between the two sampling periods (2003-2007 and 2010-2015) for several pathogens. Notably, there were statistically significant increases in the MAR index for Pseudomonas aeruginosa (from 0.54 to 0.63) and V alginolyticus (from 0.32 to 0.37). For environmental bacterial isolates, a MAR index of higher than 0.20 is considered an indicator of anthropogenic pollution.

Schaefer said the increase in the MAR index for P aeruginosa, which can cause severe lung infections, is particularly noteworthy because it's comparable to what's been reported in healthcare settings.

"That's surprising because this waterway isn't a hospital, so there shouldn't be this massive exposure to antibiotics," he said. "But yet there appears to be, in this bacterial population."

In all bacterial isolates, Schaefer and his colleagues reported significant increases in resistance to cefotaxime and ceftazidime—two third-generation cephalosporins—over the two sampling periods, an observation they suggest could reflect rising use of the antibiotics in humans in the lagoon-adjacent communities. In addition, resistance to ciprofloxacin in E coli isolates more than doubled, mirroring recent trends in human clinical infections.

Although the dolphins weren't infected with any of the resistant pathogens, the findings are significant because dolphins are a sentinel species. Their health can provide clues about what's occurring in the environment and provide a warning about potential threats to human health.

"We know that these dolphins are residents of this area, and these are waters that people are using for fishing and recreation. They're swimming in it and eating food from it," Schaefer said. "So the dolphins are actually giving us some potentially important information about public health risks in the area."

Schaefer and his co-authors believe the presence of such high levels of antibiotic-resistant bacteria in the dolphins is likely the result of resistant pathogens from humans getting into the water, along with antibiotic residues, which can create selection pressure that encourages antibiotic-resistant bacteria to share genes and further spread resistance. The presence of nitrates, phosphates, and heavy metals in the water, such as mercury, can facilitate this process, they explain.

The source of this contamination isn't hard to discern. There are nearly a million people living and working in the region, an estimated 300,000 septic systems in the five surrounding counties, farmland, and a number of residential canals that feed into the Indian River Lagoon. It's a complex system, Schaefer noted, with multiple inputs and stressors that could be helping turn the waterway into a reservoir for antibiotic resistance.

Schaefer said the study highlights the concept of One Health—the idea that human, animal, and environmental health are all connected.

"It's no longer just an ecosystem or a wildlife problem; these are potential pathogens that can affect human health," he said. "So we're seeing our impacts on the environment start to circle back…and potentially impact the people who live along the lagoon."