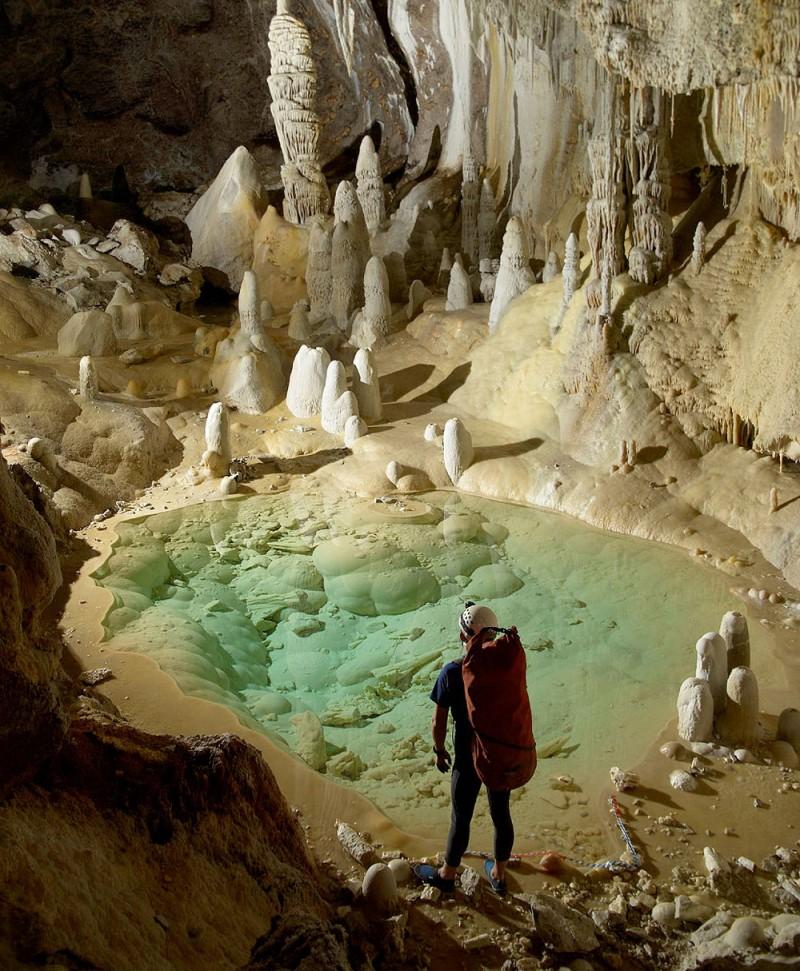 A thousand feet under the New Mexico soil, in the deepest limestone cave in the country, researchers have discovered an ancient bacterium that is resistant to many antibiotics used in human medicine today.

Researchers say the discovery not only provides new insight into the evolution of antibiotic resistance, but could also hold clues to combating it in the future.

The microbe, a non-pathogenic strain of bacteria called Paenibacillus sp LC231, was originally identified in 2012 in Lechuguilla Cave, a 136-plus-mile cave in New Mexico's Carlsbad Caverns National Park that's become an exploration site for cavers and scientists from around the world. Cavers are drawn by an array of unique formations and decorations; scientists by the chance to study microbes that have been sealed off from human or animal contact for more than 4 million of year.

In a new study published in Nature Communications, researchers describe what they found when they sequenced the genes of this ancient bacterium.

For study author Gerry Wright, PhD, director of the Michael G. DeGroote Institute for Infectious Disease Research at McMaster University in Ontario, interest in the cave stemmed from research into the origins of antibiotic resistance genes and their distribution in the microbial world. He had previously found, in studies of surface soil samples, that some type of non-pathogenic bacteria are chock-full of antibiotic resistance genes—the very same type of genes found in disease-causing bacteria in the clinic.

That finding suggested a wide reservoir for resistance genes in the environment, independent of the selection pressure caused by antibiotics. But critics suggested that all the bacteria examined could have been contaminated by genes shaped by the human use of antibiotics.

Then, in 2009, Wright attended a lecture by University of Akron microbiologist and study co-author Hazel Barton, PhD, who studies cave microbes and was one of the few people who had access to the Lechuguilla Cave. This provided a potential solution to the criticism of his previous findings—an ideal, uncorrupted environment.

"If you're going to try and find a place on the planet where you can pretty safely say there's been no exposure to humans, this seems to be it," Wright says.

So Wright and Barton teamed up, with Barton going down into Lechuguilla Cave to collect samples.

What Barton found in the cave were all sorts of bacterial isolates that were resistant to antibiotics, containing as many resistance genes as those bacteria they had identified in surface environments. But the strain of Paenibacillus they found, Wright says, was particularly interesting because it was "extra resistant."

In fact, they found it was resistant to 26 of 40 antibiotics tested, including daptomycin, a relatively new and powerful antibiotic that is used against serious drug-resistant bacteria like methicillin-resistant Staphylococcus aureus. This finding suggested that antibiotic resistance mechanisms not only exist in the environment, but have existed long before the selection pressure created by human use of antibiotics.

"To find high levels of resistance really argues that [naturally occurring] antibiotics are being lobbed around all over the place, presumably through resource competition," Barton says. She is the director of Integrative Bioscience at Akron.

The next question for the researchers, then, was what caused all the resistance in this isolated microorganism? To find the answer, they sequenced the entire genome of Paenibacillus sp LC231, and they identified a number of resistance genes that matched known resistance genes found in the Comprehensive Antibiotic Resistance Database (CARD). But there were other resistances for which they could not identify a gene.

So Wright's colleague Andrew Pawlowski went through all the genes one by one to identify the resistance mechanisms. In doing so, he found five previously unidentified resistance genes.

Furthermore, it turns out that the cousins of the ancient, isolated Paenibacillus—a spore-forming species that exists widely in the surface environment—share these resistance mechanisms. This is surprising, Wright says, because one would think that Paenibacillus sp LC231, isolated for millions of years in a non-hostile environment, would not have conserved its resistance genes.

"That would suggest there's actually a fair bit of antibiotic selective pressure in the cave as well," Wright says.

And it also raises an intriguing possibility: That the cave might actually harbor producers of antibiotics. "That's the next step in this study," Wright adds.

Barton, in fact, says one isolate from the collection analyzed by Wright and his team produced 38 different antimicrobial compounds, with three novel antibiotic structures. Those findings will be detailed in a future paper.

While the resistance genes that exist in Paenibacillus sp LC231 and its surface cousins could in principle be transferred to pathogens, Wright says they found no evidence of plasmids, which means the genes aren't mobile and aren't likely to present a clinical threat. Moreover, adds Barton, it could be decades before these pathways of resistance emerge, so there's time to come up with ways to defeat these genes before they become a problem.