Study suggests mass azithromycin may promote resistance to other antibiotics 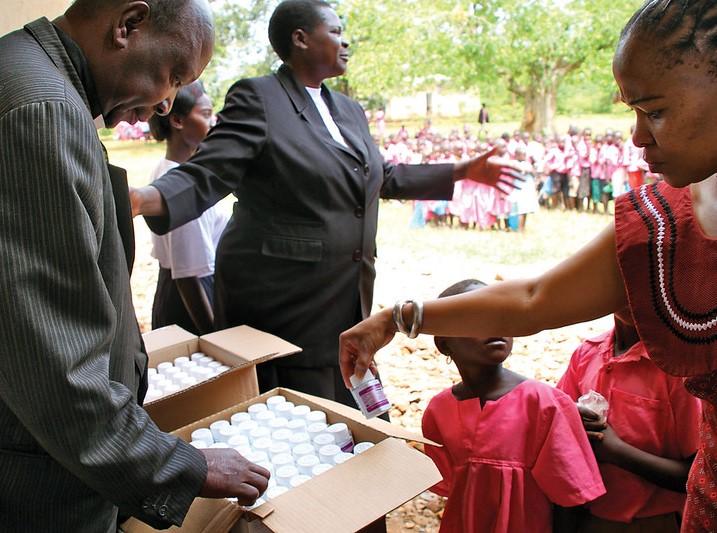 A study yesterday in the New England Journal of Medicine indicates that twice-yearly mass distribution of the antibiotic azithromycin to children in villages in Niger was associated both with increased macrolide resistance and increased resistance to other antibiotic classes.

The study is the latest offshoot of the MORDOR (Macrolides Oraux pour Réduire les Décès avec un Oeil sur la Résistance) trial, a randomized controlled trial that began in 2014 to evaluate the impact of mass azithromycin distribution in rural villages Niger, Tanzania, and Malawi. The results of the trial showed that twice-yearly distribution of the antibiotic in children ages 0 to 5 was associated with a 14% reduction in childhood mortality over 2 years compared with placebo, with the most significant impact in Niger.

In the new study, researchers studied a separate group of rural communities in Niger to evaluate the impact on resistance after 4 years of twice-yearly azithromycin doses in children under 5 by analyzing the gut resistome—the reservoir of resistance determinants (genes) in the digestive tract—compared with children in villages that received placebo.

"It's a small signal, but it seems real," said study co-author Thomas Lietman, MD, an ophthalmologist at the University of California at San Francisco's (UCSF) Proctor Foundation who was involved in the original MORDOR trial. "I was surprised."

In the study, which was led by Thuy Doan, MD, PhD, of UCSF's Proctor Foundation and conducted at the same time as the MORDOR trial, researchers randomly selected 30 communities in Niger to receive twice-yearly administration of azithromycin or placebo to children 1 to 59 months of age. They then collected rectal samples from randomly selected children in each village at 0, 36, and 48 months for metagenomic analysis.

A total of 3,232 samples were collected during the 4-year study period, with 546 samples from the villages that received placebo and 504 samples from those that received azithromycin analyzed at 48 months. The analysis showed that, at 48 months, the macrolide-resistance determinants were 7.5 times higher in children treated with azithromycin than in those who received placebo. That finding, though not unexpected, indicates a cumulative effect of azithromycin on the collective gut microbiome of a community.

But the analysis also found, at 36 months, increases in resistance determinants for several other antibiotic classes in the children who received azithromycin, including beta-lactams (2.1 times higher than in the placebo group), aminoglycosides (2.3 times higher), metronidazole (2.3 times higher), and trimethoprim (2.2 times higher). Beta-lactam antibiotics, such as penicillin and amoxicillin, are particularly important because they are widely used in sub-Saharan Africa to treat common bacterial infections.

"You really don't want to select for a lot of resistance in that class," Lietman said.

The authors suggest that, as azithromycin reduces susceptible bacteria in the gut, it may be leaving behind gut bacteria that harbor macrolide-resistance genes, and also selecting for bacteria from the same lineage that are carrying other resistance genes.

"Although it is not clear to what extent genetic resistance determinants correlate with phenotypic resistance, the findings highlight the potential for broad antibiotic resistance even when a single antibiotic is repeatedly distributed in the community," they wrote.

As a result, they add, any program of mass antibiotic distribution will likely need to monitor for resistance to more than one antibiotic class.

The findings are noteworthy because this is the first observation of resistance to other antibiotic classes associated with mass azithromycin distribution, a strategy that has also been used in Ethiopia and other African countries for more than two decades to eliminate trachoma, the world's leading infectious cause of blindness. And trachoma elimination programs treat a larger age-group—0 to 9 years of age.

In September, the World Health Organization (WHO) recommended against universally implementing mass azithromycin distribution for children under 5 in low- and middle-income countries, in part because mortality results from other studies have been inconsistent, but also because of the potential for macrolide resistance. But the WHO did recommend that mass azithromycin distribution in children ages 1 to 11 months be considered in some sub-Saharan countries with high childhood mortality.

That conditional recommendation was based on a subgroup analysis of the MORDOR trial, which found that azithromycin had the greatest impact in children under 1, and the theory that treating a smaller group of children might limit the potential for antibiotic resistance.

Lietman said that theory makes sense, but is also untested.

"What's going to happen when we just treat the infants? I don't think there'll be much resistance at all," he said. "But also we don't know that, if you treat just the infants, you'll get a mortality reduction."

Lietman said the strategy of limiting mass azithromycin distribution to infants is currently being studied in Niger, Mali, and Burkina Faso.