WHO calls for an end to antibiotic use in healthy animals 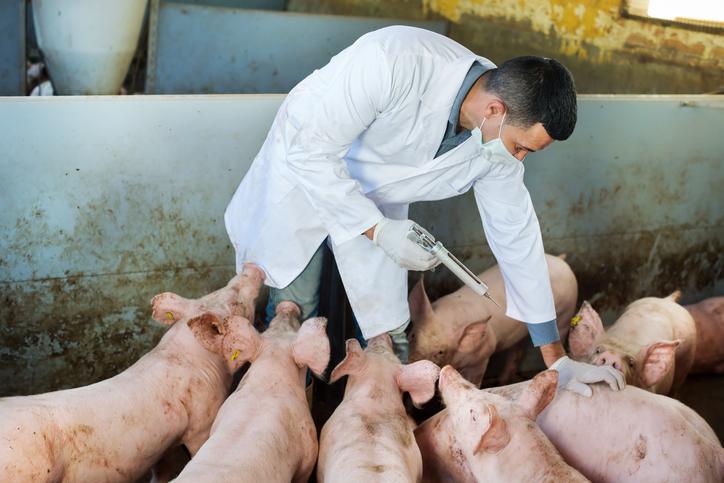 Citing the benefits to public health, the World Health Organization (WHO) today called for an overall reduction in the use of antibiotics in food-producing animals, recommending that farmers stop using antibiotics for growth promotion and disease prevention in healthy animals.

The formal guidelines issued by the WHO further recommended that when animals are diagnosed with a bacterial infection, antibiotics that are considered critically important for human medicine should not be used for treatment or to prevent the spread of the infection within a herd or flock, unless tests indicate those drugs are the only treatment option. Instead, antibiotics used for the treatment of sick animals should be chosen from those the WHO considers least important to human health.

WHO officials said the guidelines were driven by the need to preserve the effectiveness of medically important antibiotics, many of which are also used by farmers to promote growth and prevent disease in livestock and poultry. The widespread use of these drugs in animal agriculture is widely seen as contributing to the emergence of antibiotic-resistant pathogens that are transmitted to humans via food and the environment.

"We need to take action in animal production to protect public health," Kazuaki Miyagishima, MD, PhD, director of the WHO Department of Food Safety and Zoonoses, said at a press conference in Geneva. He added that while the guidelines could have a negative impact on animal production and other sectors, the need to preserve antibiotics for human use "by far" outweighs that impact.

The agency said the guidelines are based on decades of expert reports and evaluations of how antibiotic use in food-animal production is contributing to antibiotic resistance in both humans and animals. That includes a systematic review of 179 studies, commissioned by the WHO and published today in The Lancet Planetary Health, that found that interventions to reduce antibiotic use in food-producing animals decreased drug-resistant bacteria in animals by approximately 15% and multidrug-resistant bacteria by 24% to 32%.

Although evidence that using fewer antibiotics in livestock and poultry has had an impact on human health was more limited, a meta-analysis of 13 studies showed that such interventions were associated with a 24% absolute reduction in the prevalence of antibiotic-resistant bacteria in humans.

The WHO estimates that antibiotics purchased for use in food-producing animals account for up to 80% of all antibiotics sold in some countries. In the United States, that number is estimated to be between 70% and 80%. While the United States and the European Union have banned the use of medically important antibiotics for growth promotion in food animals, many low- and middle-income countries do not regulate the use of antibiotics in the animal production sector. The concern is that antibiotic use in food animals is going to soar in these nations as living standards rise and demand for meat grows.

A recent study estimated that global consumption of antibiotics in livestock and poultry will climb to 200,235 tons by 2030, up from 131,109 tons in 2013, without restrictions. The WHO said today that implementation of the guidelines in low- and middle-income countries may require assistance with animal health management and husbandry practices.

Officials at today's press conference cited Denmark, the Netherlands, Norway, and the United Kingdom as countries that have adopted stricter restrictions on antibiotic use in food animals with minimal impact on livestock and poultry production. Denmark, which ended the use of antibiotics for growth promotion in 1999 and uses the drugs only for treating sick animals, has seen overall consumption of animal antibiotics drop by 49% since 1994, while meat production has increased by 15%.

"The good news is that these recommendations, including the ban on antimicrobials as growth promoters, have been successfully implemented in many parts of the world, in Europe in particular," Aiwa Aidara-Kane, PhD, coordinator of the WHOs Department of Food Safety and Zoonoses, told reporters.

Tara Smith, PhD, an epidemiology professor at Kent State University who's done extensive research on the spread of livestock-associated methicillin-resistant Staphylococcus aureus (LA-MRSA) in humans, says she welcomes the recommendations. "I think it's commendable that the WHO has put this out, to provide aspirational goals for countries already starting work on controlling antibiotic use in livestock and to perhaps give an extra push for those who are a bit behind, like the United States," she told CIDRAP News.

While a ban on antibiotics for growth promotion went into effect in the United States this year, US farmers are still allowed to use antibiotics for disease prevention, under the guidance of a licensed veterinarian. Smith and other experts contend that using antibiotics for disease prevention—a practice that continues in many countries besides the United States—constitutes a much larger portion of antibiotic use in animals than growth promotion. "We won't know if the changes put in place this year restricting growth promotion use in the US will actually move the needle on antibiotic use for a while yet, but targeting prophylactic [preventive] use as a next step makes sense," she said.

Public health and animal medicine consultant Gail Hansen, DVM, agreed that calling for an end to the use of antibiotics for disease prevention in animals is a significant step for the WHO to take. "The WHO is saying we really need to mitigate antibiotic resistance, and the way to do that is not using antibiotics for growth promotion and not using them for prevention when there's no disease," she said.

Although the WHO recommendations are not binding, Hansen said they set a bar and send a strong message to countries that world bodies recognize antibiotic misuse in animal production as an important public health issue that needs to be addressed. She also thinks that the lessons learned in countries that have implemented antibiotic restrictions in the animal sector can be shared with low- and middle-income countries.

"I think the higher income countries can certainly give some ideas and give some help to those countries that are just starting to look at this issue," she said.

But not everyone agrees with the new guidelines. “The WHO guidelines are not in alignment with U.S. policy and are not supported by sound science," Chavonda Jacobs-Young, PhD, chief acting scientist with the US Department of Agriculture, said in a statement. "The recommendations erroneously conflate disease prevention with growth promotion in animals."

The Animal Health Institute (AHI), a group that represents veterinary pharmaceutical companies, also challenged the recommendations, saying in an emailed statement that focusing only on the amount of antibiotic use, rather than judicious use, fails on two counts.

"First, both studies and experience show that programs aimed only at reducing use in animals has not been effective at reducing resistance rates in humans," AHI said. "Second, such programs lead to more animal disease and death, which undermines good animal welfare and can reduce food safety."

The WHO recommendations also included two "best practice" statements aimed at further protecting the effectiveness of antibiotics. The first calls for any new class of antibiotic developed to be considered critically important for human medicine. The second suggests that medically important antibiotics not currently used in food-animal production, such as carbapenems, should not be used in food-producing animals in the future.