WHO releases its first report on global antibiotic resistance 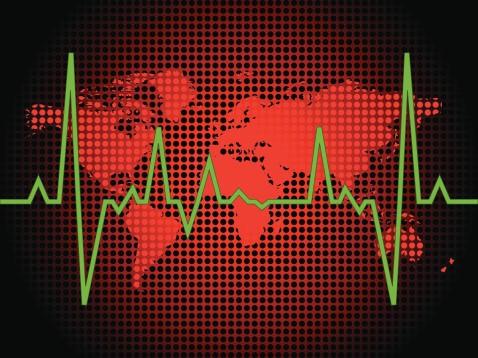 New surveillance data released today by the World Health Organization (WHO) reveals widespread and in some cases high levels of antibiotic resistance across the globe in the most common bacterial infections.

In the first report from the WHO's Global Antimicrobial Resistance Surveillance System (GLASS), data from 22 countries and more than 500,000 isolates show that Escherichia coli, Klebsiella pneumoniae, Staphylococcus aureus, Streptococcus pneumoniae, and Salmonella spp are the most commonly reported resistant bacteria. And while resistance to the antibiotics used to treat these pathogens varies, resistance is alarmingly high in some countries.

"The report confirms the serious situation of antibiotic resistance worldwide," Marc Sprenger, MD, director of the WHOs Antimicrobial Resistance Secretariat, said in a press release. "Some of the world's most common—and potentially most dangerous—infections are proving drug-resistant."

GLASS, which was launched in 2015 to help achieve the goals of the WHOs Global Action Plan on Antimicrobial Resistance (AMR), seeks to standardize the collection and sharing of AMR surveillance data across the globe. Establishing country-level surveillance of antibiotic use and resistance is seen as crucial to efforts to fully understand the extent of AMR and combat the rise and spread of resistant pathogens. Of the 52 countries currently enrolled in GLASS, 40 provided information on their surveillance systems, and 22 provided AMR data.

The AMR data provided by the 22 countries are primarily for pathogens isolated from blood, urine, stool, cervical, and urethral specimens and show a tremendous range in the proportion of bacteria that were non-susceptible to one or more of the antibiotics commonly used to treat them. Resistance to penicillin, for example, ranged from zero to 51%, while resistance to ciprofloxacin in urinary tract infections caused by E coli ranged from 8% to 65%. Ciprofloxacin is the drug most frequently used to treat urinary tract infections.

Among patients with suspected bloodstream infections, the proportion that had bacteria that were non-susceptible to commonly used antibiotics ranged from zero in some countries to as high as 82% in others. Bacterial bloodstream infections, especially those caused by drug-resistant bacteria, are among the most serious and life-threatening for patients.

High levels of resistance were also found in bacteria that have been deemed "priority pathogens" by the WHO. In South Korea, nearly 75% of Acinetobacter isolates found in blood were resistant to the carbapenem antibiotics imipenem and meropenem. Carbapenem-resistant A baumannii has been classified by the WHO as a critical priority for research and development of new antibiotics.

Some countries also reported high levels of resistance in the bacterium that causes gonorrhea. In Malawi, nearly 100% of Neisseria gonorrheae genital isolates were non-susceptible to ceftriaxone and roughly 15% were non-susceptible to azithromycin. These drugs that constitute the only remaining treatment for gonorrhea. The WHO has warned that the emergence of pan-drug–resistant gonorrhea is on the horizon and has classified N gonorrheae as a high-priority pathogen.

The WHO notes, however, that the data—submitted from April 2017 through July 2017—vary widely in quality and completeness because of differences in surveillance capabilities. The countries combined submitted 507,746 isolates with antibiotic susceptibility testing results, but the number of isolates per country was as low as 72 and as high as 167,331. Only one country submitted data on all selected pathogens. Because of this variability, the report does not attempt to compare results between countries and regions.

The GLASS report does not include data on drug-resistant tuberculosis, which the WHO tracks separately.

The WHO calls the GLASS report "an important first step" and says it shows that more and more countries are building up their surveillance capabilities and will be able to provide more complete data in the future. The agency says almost all countries enrolled in GLASS have what it considers to be the three essential core components for national AMR surveillance: a national coordination center, a national reference laboratory, and sentinel surveillance sites where diagnostic results and epidemiologic data are collected.

But some countries face larger hurdles than others in establishing their AMR surveillance systems. Lack of funds, too-few personnel, and poor health system infrastructure are particular challenges for low- and middle-income countries and will have to be overcome.

"A global system such as GLASS can succeed only through continued data sharing as well as global collaboration, harmonisation, and coordination between all partners involved in the implementation of AMR surveillance," the WHO writes in the report.

The WHO says GLASS is supporting countries in their efforts to build national laboratory capacity and is prioritizing technical assistance in low-income countries through a range of activities.