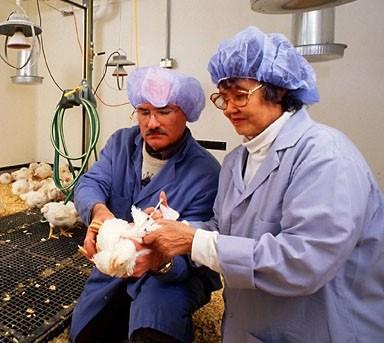 The US Department of Agriculture (USDA) made it official yesterday that it won't use any existing poultry vaccines to fight the avian influenza outbreaks plaguing the Midwest, for reasons that include lack of effectiveness and likely loss of markets for US poultry products.

Meanwhile, Minnesota reported another probable turkey outbreak today, while Iowa had a rest from new incidents and Nebraska became the latest state to ban bird shows as a precaution against the virus.

In a statement yesterday afternoon, the USDA explained multiple reasons for not moving forward with any poultry vaccinations now, although the agency continues to work on developing a vaccine for the highly pathogenic avian influenza (HPAI) H5N2 and H5N8 viruses circulating in US flocks.

"Vaccines currently available are not well matched and do not meet a suitable level of efficacy," the statement said. "USDA also wants to be sure that the vaccine industry is in a position to produce enough doses to create an effective control measure. Finally, additional outreach with trading partners will be required to avoid significant market disruptions."

USDA officials reported in March that existing vaccine "seed strains" for H5 viruses had been tested and found not sufficiently effective. In the new statement, the agency said, "The vaccine currently available offers just 60 percent effectiveness in chickens, leaving 4 in 10 birds unprotected. The vaccine's effectiveness in turkeys is still being studied."

The statement did not identify the vaccine or its manufacturer. In response to a query today, Joelle Hayden, a spokeswoman for the USDA's Animal and Plant Health Inspection Service (APHIS), declined to name the vaccine but said it is "in production for use internationally and licensed for emergency use in the US."

"There are several other companies with US-based operations also looking at the vaccine and [that] have the ability to make vaccines for the current strain of HPAI," she added. "They and the government are considering those options and testing possible vaccine combinations."

Hayden also noted that the USDA's Southeast Poultry Research Laboratory in Georgia is developing a vaccine seed strain for potential emergency use and said information about the project will be released after it's finished.

The USDA statement said the agency "will reevaluate its vaccination decision as more effective vaccines are developed and ready for use, carefully considering both the efficacy of the vaccine and the potential trade impacts. If used, vaccines will be targeted in the states and poultry sectors where they can be most effective. Areas where quarantine, depopulation, and enhanced biosecurity cannot stop the spread of HPAI would be prioritized."

The use of poultry vaccines against avian flu raises difficult questions because the injections may protect birds from disease without preventing infection, which means vaccinated birds may be capable of spreading the viruses while seeming healthy. That risk is apt to scare away potential buyers of vaccinated birds or products made from them.

Acknowledging this reality, the USDA said, "During this outbreak, USDA has preserved open markets to countries that account for approximately 84 percent of the value of U.S. poultry and poultry products (including eggs) in 2014. However, some significant trading partners have indicated that, if we began vaccinating, they would ban all U.S. exports of poultry and eggs until they could complete a risk assessment."

Such risk assessments take time, and the loss of the markets could cost US poultry producers billions in lost export sales, with no clear timeline for reopening the markets, the agency said.

In Minnesota, a probable avian flu outbreak was reported on a turkey farm in Brown County, which is in the south-central part of the state and has had four previous outbreaks. The Minnesota Department of Public Safety (DPS) said an estimate of the flock size on the farm is not yet available.

The event increases Minnesota's outbreak count to 107 farms in 23 counties, with 8.87 million birds affected, not counting farms where flock sizes have not yet been estimated.

Meanwhile, the Iowa Department of Agriculture and Land Stewardship (IDALS) issued a statement saying that the hard-hit state had no new outbreaks to report today. It noted that as of yesterday, 24.1 million of the 27.7 million commercial layer chickens and pullets on affected farms have been euthanized.

Also today, Nebraska joined the growing list of Midwestern states that have decided to ban bird shows and sales for the rest of this year as a precaution against the H5N2 virus.

The Nebraska Department of Agriculture (NDA) said it is canceling all poultry events where birds are commingled, including the Nebraska State Fair, local and county fairs and festivals, swap meets, exotic sales, and live-bird auctions.

Calling the decision difficult, NDA Director Greg Ibach said, "This decision was not made lightly, but is necessary to assure we do everything possible to protect our collective poultry flock from further spread of the virus."

Jun 3 USDA statement on vaccine use