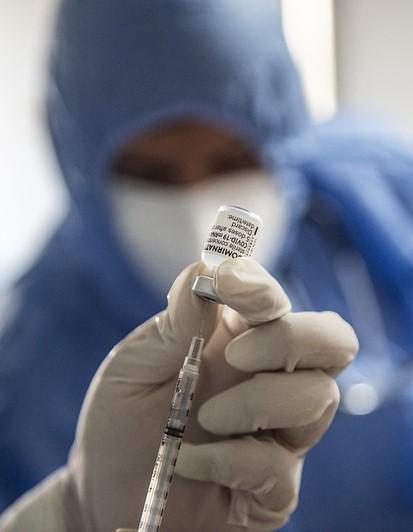 Today in the United Kingdom, President Joe Biden confirmed the United States would be donating 500 million doses of the Pfizer vaccine globally.

"America knows first-hand the tragedy of this pandemic. We've had more people die in the United States than anywhere in the world, nearly 600,000 of our fellow Americans," Biden said after meeting British Prime Minister Boris Johnson ahead of the G7 Summit, set to begin tomorrow. "We also know the path to recovery."

The vaccines will be distributed to more than 90 different countries through COVAX, the World Health Organization's COVID-19 vaccine arm.

In other breaking vaccine news, today Johnson & Johnson said the Food and Drug Administration (FDA) had authored an extension on the shelf life of its one-dose adenovirus-based COVID-19 vaccine from 3 months to 4.5 months.

"The decision is based on data from ongoing stability assessment studies, which have demonstrated that the vaccine is stable at 4.5 months when refrigerated at temperatures of 36-46 degrees Fahrenheit," the company said.

Many states had complained they had no way to sell or share supplies of the vaccine that were set to expire, unused, at the end of the month.

And finally, Moderna has confirmed it is seeking FDA emergency use authorization for their vaccine to be given to those 12 and up, following the path of Pfizer.

Yesterday Seattle became the first city to fully vaccinate 70% of its residents above age 12, making it the most inoculated city in the country, the Washington Post reports. Seattle's mayor said the city also had the lowest number of infections, hospitalizations, and deaths of any major US city.

"Now that we have reached community protection, we can lead the nation in safely reopening and recovering in earnest," said Mayor Jenny A. Durkan in a statement. "Seattleites—get outside and support a local small business, help revive our historic arts and cultural scene, and enjoy our unparalleled Seattle summers safely."

In Texas, one-third of the state's residents are fully vaccinated, and new COVID-19 cases, hospitalizations, and deaths are as low as they were before the first wave of the outbreak last summer, according to the Texas Tribune.

But despite progress the United States still faces challenges. Deaths have dropped in all age groups, but half of all deaths are now comprised of people ages 50 to 74, up from one-third in December, according to a New York Times analysis. While this means vaccination efforts have been successful with the oldest Americans, it shows middle-aged populations of all racial groups are still at risk if they remain unvaccinated.

Deaths from nine conditions rose in 2020

Diabetes deaths increased by 14%, Alzheimer’s was up 8%, Parkinson’s 11%, high blood pressure 12%, and stroke 4%, the Associated Press said, noting the CDC provided just numbers and no explanations on the increases.

The increase in excess deaths likely occurred as people avoided hospitals and doctor’s offices in the early days of the pandemic, experts told the news agency.