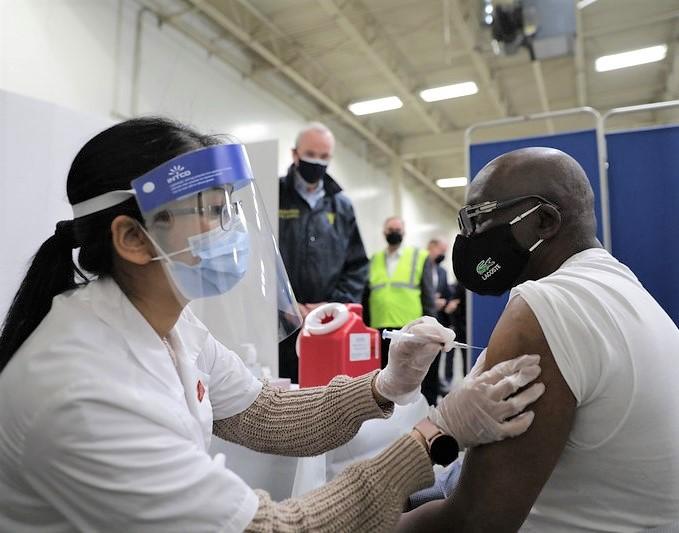 "We are going to open it up across the board," said President Joe Biden as he described his administration's new vaccine eligibility plan, which will now guarantee all US adults will be eligible to get in line for a COVID-19 vaccine on Apr 19

That date is 2 weeks earlier than the May 1 deadline Biden set in March.

Biden made his remarks today both as he toured a vaccination site at the Virginia Theological Seminary in Alexandria, VA, and during a public address on the state of vaccines. America has now distributed more than 150 million vaccine doses, and has reached a pace of 3 million vaccines administered per day.

"We have given more vaccine than any other nation in the world," Biden said. Every state has now given at least one dose of COVID-19 vaccine to a quarter or more of its population, the New York Times reports.

Currently, three vaccines are approved for use in the United States: A Johnson & Johnson one-dose adenovirus-based vaccine, and two mRNA vaccines from Pfizer and Moderna that each require two doses administered at least 3 weeks apart.

Cases soar in some states as others plan reopening

The encouraging news on vaccines comes as some states are seeing a rise in case counts once again, likely due to highly contagious variants.

In Michigan, state officials reported 11,082 new COVID-19 cases on Monday, breaking the previous record of 10,140 hit on November 20, Reuters reported. Michigan has the most new cases reported by any state in the last 7 days.

Meanwhile, other states have started to publicly announce more reopening moves. Today California Gov. Gavin Newsom said if all goes well, his state will be open on Jun 15.

"With more than 20 million vaccines administered across the state, it is time to turn the page on our tier system and begin looking to fully reopen California's economy," Newsom said in a statement. "We can now begin planning for our lives post-pandemic."

A mask mandate will stay in place in California for now.

In Texas, which has already reopened much of its economy, Gov. Greg Abbott yesterday issued an executive order banning vaccine passports in the state.

"Government should not require any Texan to show proof of vaccination and reveal private health information just to go about their daily lives," Abbott said, while simultaneously encouraging vaccination. "That is why I have issued an Executive Order that prohibits government-mandated vaccine passports in Texas. We will continue to vaccinate more Texans and protect public health — and we will do so without treading on Texans' personal freedoms."

Today at the vaccination site, Biden said that after he guarantees vaccine supply for all Americans, the United States is "going to start giving the vaccine around the world, to poor countries. Because you can't build a fence high enough, you can't built a wall high enough [against the virus.]"

To oversee that project, the administration has named Gayle Smith, a former US Agency for International Development (USAID) coordinator under the Obama administration, as the coordinator for the Global COVID Response & Health Security at the State Department, according to Reuters.

The United States has already announced plans to donate roughly 4 million doses of the AstraZeneca vaccine to Mexico and Canada in bilateral loan deals with the two countries.

Finally today, two new polls illustrate the erosion of public trust in the Centers for Disease Control and Prevention (CDC) and the toll that frontline healthcare workers say stress has taken on them during the pandemic.

Surveys conducted in May and October of 2020 showed a 10% decline in public trust in the CDC over that period, according to a new Rand Corporation report. The drop in trust fell on political fault lines, and was particularly significant among people who intended to vote for a candidate other than Joe Biden in the 2020 election, or did not intend to vote at all.

In another poll from the Washington Post-Kaiser Family Foundation, more than 60% of  frontine healthcare workers say worry or stress caused by the pandemic has taken a toll on their mental health. Fifty-five percent say they feel burned out going to work, and nearly half say worry or stress is affecting their sleep.