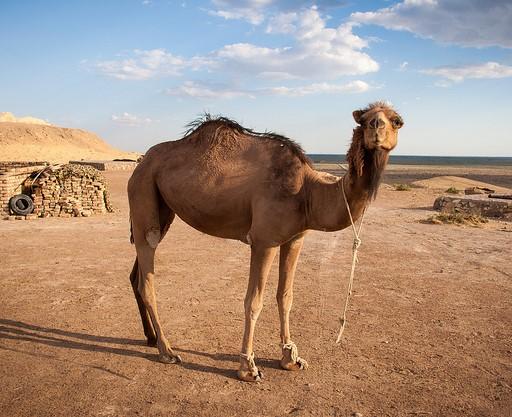 Italian and Algerian researchers released new evidence of prion disease in three dromedary camels found in an Algerian slaughterhouse, according to a new study in Emerging Infectious Diseases.

"These camels are quite intriguing," prion expert Valerie Sim, MD, associate professor at the University of Alberta, told CIDRAP News. "If we know anything about prions it's that they can they can cross species; it's not easy to do, but they can. So it's very concerning if you have any infected animals in the food supply chain."

Sim was not involved in the new study.

In prion disease, the normal shape of a protein is contorted, and that triggers a domino-like effect in neighboring proteins, leading to fatal and severe neurodegenerative disease. Prion diseases can affect both humans and animals, and though inter-species transmission is rare, it can happen, as it did most famously during the bovine spongiform encephalopathy (BSE, or "mad cow") epidemic, which started in the late 1980s in the United Kingdom.

In both humans and animals, the diseases can happen spontaneously, or they can be inherited from a genetic mutation or, rarely, transmitted when a person eats the meat of an infected animal. The last category, infectious prion disease, is the most concerning for researchers working on the human-animal interface.

"Is there a clear exposure risk in camels? That's what's needed to be understood," said Sim. She said that the presence of prions in the camels' lymph tissues suggests the disease was acquired and not spontaneous, likely from something the animal was digesting.

In the Emerging Infectious Diseases study, researchers describe CPD in three symptomatic camels from a Saharan population in southeastern Algeria, where the animals were brought for slaughter to the Ouargla abattoir in 2015 and 2016. Dromedary camels are commonly slaughtered and consumed in many parts of North Africa and the Middle East.

Breeders bringing the camels to slaughter noted several neurologic symptoms from 2010 to 2015 in about 3% of their animals, including "weight loss; behavioral abnormalities; and neurologic signs, such as tremors, aggressiveness, hyperreactivity, typical down and upward movements of the head, hesitant and uncertain gait, ataxia of the hind limbs, occasional falls, and difficultly getting up." Anecdotal evidence collected from employees at the slaughterhouse suggests that these symptoms have been present since the 1980s.

The researchers, from Algeria and Rome, took brain samples as well as samples from the cervical, prescapular, and lumbar aortic lymph nodes from three symptomatic and one healthy camel. They confirmed the diagnosis by the presence of disease-specific prion protein in brain tissues from the symptomatic animals. The authors said the presence of prions in the lymph nodes suggests infection, but the disease remains a mystery.

"The origin of CPD is unknown. It might be a disease unique to dromedaries or a malady deriving from transmission of a prion disease from another species," the authors concluded. They noted, however, that BSE from imported meat in the late 1980s cannot be ruled out.

Michael Osterholm, PhD, MPH, director of the University of Minnesota's Center for Infectious Disease Research and Policy, publisher of CIDRAP News, said the study was noteworthy especially as it comes on the heels of new information from Canadian researchers that showed that chronic wasting disease—another prion disease—in deer and their relatives can be transmitted to non-human primates fed meat from infected animals.

"The whole issue of prions and meat consumption is a new and much more serious topic we need to look at," Osterholm said. "Even though there's no evidence that there is transmission [from camels], the absence of evidence is not evidence of absence."