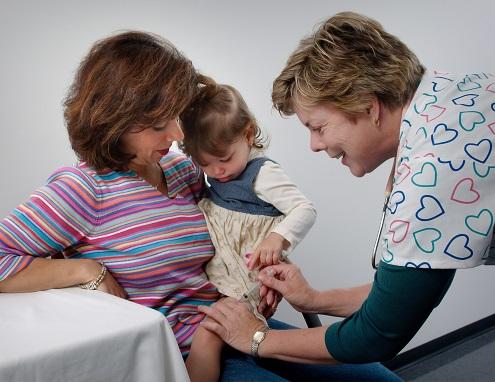 More than 90% of children 2 years and younger who were born in 2016 and 2017 received the recommended measles, mumps, and rubella (MMR); poliovirus; hepatitis B (hepB); and varicella vaccines, according to a report today in Morbidity and Mortality Weekly Report by the Centers for Disease Control and Prevention (CDC).

While coverage in general improved from children born in the 2 years prior, still less than 60% of children received the recommended doses of flu vaccine—a statistic the researchers would like to see improve, especially in light of the potential "twindemic" this flu season of COVID-19 and influenza.

The CDC and its Advisory Committee on Immunization Practices recommend vaccinations for 14 illnesses by the time children are 24 months old. Coverage disparities were seen, however, among the uninsured, those enrolled in Medicaid, minorities, and those who lived in poverty.

Of these, the greatest factor was insurance level: 4.1% of children who were uninsured had no vaccinations, compared with 1.3% in those who had Medicaid plans and 0.8% among those who had private insurance.

Because of this, the CDC researchers suggest that outreach and accessibility be evaluated for the Vaccine for Children program, which provides free immunizations to children who are Medicaid-eligible, uninsured, American Indian or Alaskan Native, or not normally covered by their insurance. Overall, the proportion of children who received no vaccination by the time they were 24 months old was 1.2%.

"Disparities in coverage were also observed by race/ethnicity, poverty level, and metropolitan statistical area (MSA) status," the researchers add. "The disparities, although smaller in magnitude than those associated with health insurance status, were present for nearly all vaccines based on poverty status but were much less consistent for race/ethnicity or MSA status."

Using National Immunization Survey-Child (NIS-Child) data, the researchers identified 25,970 random children throughout the country with adequate provider data and guardians willing to participate in the survey.

Coverage regarding the rotavirus vaccine, the combined seven-vaccine series, and the hepB birth dose increased for those born in 2016 and 2017. A total of 70.5% of children received the seven-vaccine series, up from 68.4%, and 75.4% completed the rotavirus vaccination series, compared with 72.2%. HepB birth dose vaccinations were at 76.3%, an increase of 4.2 percentage points.

The flu vaccine also showed an increase in coverage: 58.1% of children born in 2016 and 2017 received two or more doses of the flu vaccine, up from 53.8%. Despite this improvement, flu vaccines still had the lowest coverage by 12.4 percentage points compared with the next-lowest (the seven-vaccine series) and 35.2 percentage points compared with the most-received vaccine (>3 doses of diphtheria, tetanus toxoids, and acellular pertussis [DTaP], 93.3%).

Furthermore, coverage by state ranged the widest in this category, with only 38.9% of children in Florida receiving two or more doses of the flu vaccine; whereas, peak coverage was 81.7% in Massachusetts.

The report states that a recent assessment of total survey error says that NIS-Child data may underestimate coverage for MMR, four or more doses of DTaP, and the combined seven-vaccine series—the latter by up to 9 percentage points. The sample selection (0.3% of the children born in 2016 and 2017, according to the CDC), incomplete vaccination histories, and the outreach method (randomized phone calls) also add to the study's limits.