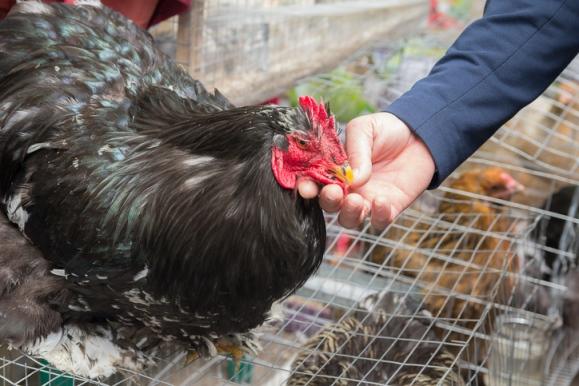 China's weekly number of H7N9 avian flu cases continues to slowly decline following an unprecedented spike of cases over the winter, with 17 more illnesses, 3 of them fatal, reported in the past week.

Also, a research team from China published an analysis of cases in Jiangsu province this season, which raises questions about whether illnesses have become more severe over the past few H7N9 waves.

Citing mainland health officials, Hong Kong's Centre for Health Protection (CHP) said today in a weekly update that 17 new cases were reported from Mar 24 to Mar 30 in six provinces, most of them in Hunan, Jiangsu, and Guangxi provinces. All patients were adults, with illness onsets ranging from Mar 6 to Mar 24.

Sixteen of the patients had exposure to poultry or poultry markets, a known risk factor for contracting H7N9.

China has now reported at least 555 cases and 179 deaths in the fifth H7N9 wave. The country first reported the disease in 2013.

The analysis of H7N9 cases in Jiangsu province appeared yesterday in the latest issue of Eurosurveillance.

Jiangsu is one of the most affected provinces regarding H7N9 cases and is part of southern China's poultry production hub. The report by Jiangsu researchers covers 109 fifth-wave cases reported through Jan 31, a number that exceeds all of the cases reported for the first four H7N9 waves in that province.

Ten of Jiangsu's 13 cities have been affected this season, with officials reporting a possible human-to-human case cluster and a coinfection with seasonal flu, presumably H3N2.

The demographic profile of Jiangsu's cases this season is similar to previous H7N9 waves, but the investigators said that, over the past three waves, disease progression seems faster, with the median time from symptom onset to intensive care unit admission decreasing from 9 to 10 days to 7 days. Likewise, the median time from symptom onset to death has also become shorter: 13.5 for the current wave, compared with 15 to 28 days for the last four waves.

Genetic analysis of strains from recent Jiangsu cases, however, showed no known mutations that would make the virus more transmissible to people, easier to spread among people, or resistant to neuraminidase inhibitors, the most commonly used class of antiviral drugs.

A December spike in cases could have been influenced by weather conditions as well as higher levels of contamination in poultry, the authors said, adding that an increase in environmental positives hints that the virus might be more resistant to higher ambient temperatures. They added, though, that more work is needed to analyze genetic sequences and to study the interactions among the factors that lead to human infections.

Several cities, including Suzhou, Wuxi, and Changzhou, temporarily closed live-poultry markets in December, which was followed by a case decline in January, with an even steeper drop in February.

The group concluded that it's crucial to monitor the pandemic potential and the impact that recent genetic changes may have on the poultry industry. Also, they said more efforts are needed to more quickly identify the disease in people, especially at community clinics, which is where nearly half of H7N9 patients first seek medical care.