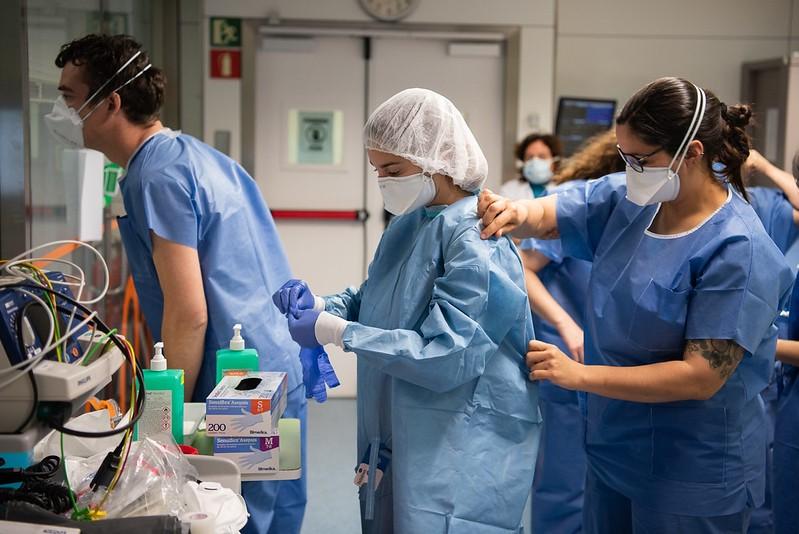 A Duke University study shows that, amid COVID-19, US healthcare workers (HCWs) had similar rates of potential moral injury (PMI)—a type of trauma-induced wound to the psyche—as military combat veterans.

The study, published yesterday in the Journal of General Internal Medicine, surveyed 2,099 HCWs in 2020 and 2021 and 618 military veterans deployed to a combat zone after the Sep 11, 2001, US terrorist attacks about PMIs they may have experienced.

PMI is a distressing reaction to exposure to traumatic events that may have psychological, behavioral, social, and spiritual effects.

Of the 618 veterans, 46.1% reported experiencing PMI induced by others' immoral actions, compared with 50.7% of HCWs, while 24.1% and 18.2%, respectively, reported being disturbed by violations of their own moral code.

Combat veterans who reported PMIs induced by others had higher rates of depression; average Beck Depression Inventory-2 score among veterans reporting other-induced PMI was 22.34, versus 13.61 among those not reporting this type of PMI. They also had lower quality of life (average Short Form Survey score, 46.70 vs 59.98, respectively).

Likewise, compared with veterans who did not report self-induced PMI, those who did had significantly greater levels of depression (average Beck score, 24.55 vs 15.44) and lower quality of life (average Short Forum score, 45.71 vs 55.73).

When HCW actions conflict with beliefs

"Moral injuries can happen when health care workers' values and beliefs conflict with their actions or the ways they witness others acting," lead author Jason Nieuwsma, PhD, a Department of Veterans Affairs (VA) and Duke researcher, said in a Duke Health press release.

"While 'burnout' is often used to describe the effects of ongoing stress in the workplace, moral injury is used to describe the damage done to the conscience or identity of people who might witness, cause, or fail to prevent acts that go against their own moral standards," he said.

"For example, with health care workers, this might entail them making choices or being part of situations that stray from their genuine commitment to healing."

The HCWs were participants in Duke's Healthcare Worker Exposure Response and Outcomes (HERO) registry, and the veterans were part of the Post-Deployment Mental Health Moral Injury study, conducted by the VA Boston Healthcare System. Average age was 47.3 years for veterans and 44.5 years for HCWs.

HCWs said that PMI stemmed from witnessing patient deaths, rationed care, policies that kept families from dying patients, and the public's disregard for slowing COVID-19 transmission. It was also triggered by staff shortages and a lack of personal protective equipment.

"It is sobering to see how many health care workers are troubled at a moral level because of their work experiences during the pandemic," Nieuwsma said. "This may help us to understand some of the current challenges facing health care systems across the country."

Senior author Keith Meador, MD, ThM, MPH, of Vanderbilt University, said in the release that the study findings may inform the VA's approach to PMI. "Our study is suggestive with respect to the importance of workplace culture and leadership for moral injury in health care," he said. "I think the role of the community, whether that be at work or elsewhere, is truly central."

Longitudinal research into HCW PMI and evaluation of potential interventions are needed, the study authors said.

"While we can learn things from comparing veterans and health care workers, the two populations are also different in many important ways, and it remains to be seen how pervasive moral injury proves to be in health care contexts over time," Nieuwsma said.