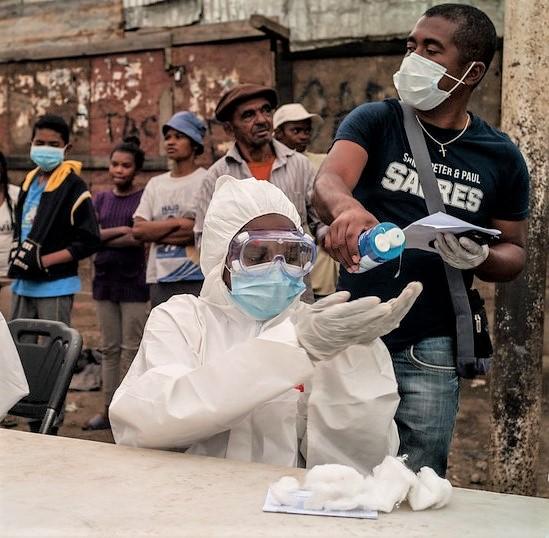 Though Latin America has evolved as the world's biggest hot spot, COVID-19 activity is escalating in other regions, including Africa, which just passed 200,000 cases, and the Middle East, where cases have accelerated over the past 3 weeks.

The global today rose to 7,440,350 cases, and 418,563 people have died from their infections, according to the Johns Hopkins online dashboard.

In an e-mail statement today, the World Health Organization (WHO) regional office for Africa said the virus was first detected on the continent in the middle of February, and it took 98 days to reach 100,000 cases. However, the total climbed from 100,000 to 200,000 in just 18 days.

However, not all countries are equally affected, and just 10 of 54 countries are pushing the recent increase in cases and have reported 80% of the illnesses. Most of the deaths are also concentrated in a limited number of countries, with 70% of the region's fatalities reported from just five: Algeria, Egypt, Nigeria, South Africa, and Sudan.

South Africa is the region's hardest-hit country, accounting for 25% of cases, with Western Cape and Eastern Cape provinces reporting most of the infections.

Half of Africa's countries are reporting community transmission, and though most virus activity is concentrated in major cities, health officials have reported spread into the provinces.

Matshidiso Moeti, MBBS, regional office director, said for now, Africa accounts for a fraction of the world's cases, but the pace of spread is quickening. "Swift and early action by African countries has helped to keep numbers low but constant vigilance is needed to stop COVID-19 from overwhelming health facilities," Moeti said.

She said many countries were quick to order lockdowns and undertake key public health measures, which slowed the spread of the virus but took a heavy toll, especially on vulnerable communities. Countries are now easing lockdowns, and she urged them to take a controlled approach while ensuring that widespread testing and contact tracing is in place.

Meanwhile, cases in the WHO's Eastern Mediterranean region have climbed to nearly 670,000, along with about 15,000 deaths, and make up about 10% of the world's total, the regional office said yesterday in a statement.

It said global attention surrounding declining COVID-19 activity in Europe seems to obscure the fact that virus levels are climbing in other parts of the world, including the Eastern Mediterranean region, where activity has accelerated over the past 3 weeks.

More than half of the region's cases over the past week were from three countries: Pakistan, Iran, and Saudi Arabia. And COVID-19 activity is on the rise in several more, which the WHO said are worrying developments.

Easing restrictions increases the risk that cases will increase, and the WHO urged countries to do evidence-based risk assessments before scaling back their measures. In other developments, almost all countries in the region have put measures in place regarding public use of masks, and about 40 hospitals in the region are participating in the WHO-led Solidarity trial to test treatments against the virus.

ECDC: Most European countries past peak

In an updated risk assessment today, the European Centre for Disease Prevention and Control (ECDC) said COVID-19 incidence in European Union countries and the United Kingdom have declined by 80% since the peak on April 9. The proportion of global cases from the European region has declined from 41% in the middle of April to 14% on June 9. The initial wave has passed its peak in all countries except for Poland and Sweden.

It said there's a risk that people might not adhere to measures that are still in place, due to the summer holiday period and "isolation fatigue," and that countries need to keep up their efforts to maintain distancing and infection prevention and control steps. "The pandemic is not over, and hypothetical forecasting indicates a rise in cases is likely in the coming weeks," the ECDC said.

In other international COVID-19 developments: