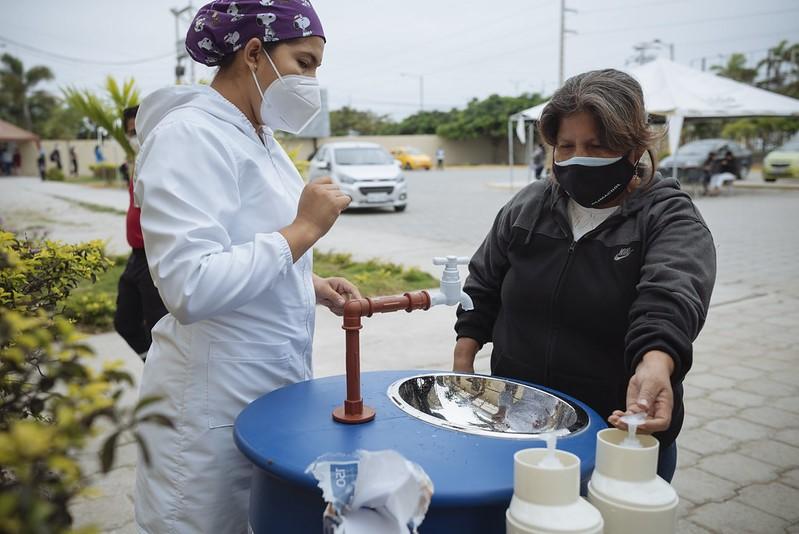 The global COVID-19 total topped 34 million cases today, as an official from the World Bank announced a $12 billion plan to help lower-income countries buy vaccine and as US lawmakers clung to the hope of a still-elusive stimulus bill to limit the pandemic's economic damage to families and businesses.

At a side event at the United Nations General Assembly yesterday, World Bank President David Malpass said the group is interested in fast-tracking the financing of COVID-19 vaccines, similar to the way it galvanized funding in March to help countries scale up emergency health support.

He announced that he is proposing that the World Bank board make $12 billion available to countries to purchase and deploy COVID-19 vaccine, once regulatory agencies approve them. He said the additional support would target low- to middle-income countries that don't have enough access and would help them alter the course of the pandemic for their people.

Malpass said the approach mirrors past World Bank efforts with vaccines and will signal to vaccine makers that developing countries have multiple ways to buy vaccines. And he added that the World Bank's private-sector arm, called IFC, is investing in vaccine companies that are willing to prioritize developing countries and in efforts to avoid production bottlenecks by securing vials, needles, syringes, and cold-storage capacity.

Global health officials, including those at the World Health Organization (WHO), have emphasized that COVID-19 remains a threat wherever it remains and that rolling out the vaccine to all countries isn't charity, it's the best plan for keeping the world safe.

More increases in some world regions

India yesterday reported nearly 87,000 cases, continuing to lead the world with the most daily cases. The country has the world's second biggest population and, in the weeks ahead, is poised to pass the United States as the country with the most cases.

In Europe, Poland reported a daily record high of 1,967 new cases today, and health officials said they expect illness levels to continue to rise. In Spain, regional leaders reluctantly ordered a lockdown again for Madrid, following a government ban on nonessential travel to and from the country's capital. And in England, health minister Matt Hancock extended COVID-19 restrictions across a broader part of the country to include Liverpool in the north, part of efforts to curb rising case numbers.

In the Middle East, another region where cases in some countries are spiking, Jordan yesterday recorded a daily record high of 1,767 cases and warned that it might have to go on full lockdown. Two other countries also reported more daily record highs, including the United Arab Emirates for the second day in a row and Israel, which has been on lockdown again since Sep 18.

Elsewhere, cases in the WHO's African region declined 13% in the latest reporting week, the regional office said on Twitter. South Africa leads the region with the most cases, but the country's illnesses declined 21% over the past 7 days.

In the United States, the pandemic continues to take its toll in the economy. The number of people seeing unemployment benefits fell to 837,000 last week, the Associated Press reported, with the Labor Department's latest report showing that US companies are cutting a record number of jobs amid the pandemic's fallout.

In Washington, DC, last ditch efforts are underway to settle on the terms of a new coronavirus relief package, with Congress set to adjourn at the end of the week though the election, the Washington Post reported. House Democrats have scaled back their proposal from $3.4 trillion to $2.2 trillion, and House Speaker Nancy Pelosi, D-Calif., said she may move to a House vote on the package today.

Republicans strongly oppose the bill, though the White House has offered a $1.6 trillion package, which Pelosi rejected as being too small, prompting Trump Administration charges that Pelosi isn't serious about the negotiations. She and Treasury Secretary Steven Mnuchin were slated to meet again to seek common ground today.

In a related development, United Airlines and American Airlines announced that they would start furloughing tens of thousands of employees today, following news that Congress and the White House failed yesterday to come to an agreement on the coronavirus stimulus, the Washington Post said in a separate report. The companies said they could call the employees back if lawmakers reach a deal in the next few days.