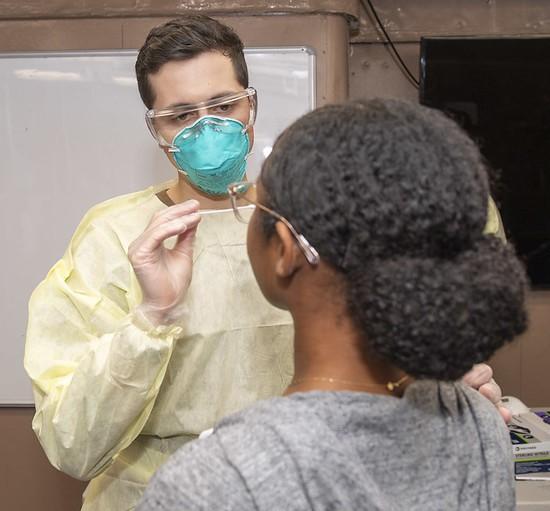 The findings of two studies presented at this week's virtual European Society of Clinical Microbiology and Infectious Diseases (ESCMID) Conference on Coronavirus Disease suggest that patients' loads of SARS-CoV-2, the virus that causes COVID-19, declined as the pandemic progressed, which may help explain falling rates of coronavirus-related intensive care unit (ICU) use and deaths.

Both unpublished studies were observational, however, so they cannot determine cause and effect, only highlight the association.

Measuring the progress of the pandemic

The first study, conducted by Wayne State University researchers in Detroit, involved a retrospective analysis of 708 initial nose-throat swabs from hospitalized coronavirus patients tested from Apr 4 to Jun 5 using reverse transcription polymerase chain reaction (RT-PCR). The goal was to better describe the effects of changing viral loads—which is a measure of virus density—at a population level.

In the first week of the study, 48.7% of viral loads were characterized as intermediate, versus 25.5% in both the low and high viral load categories. Thereafter, the percentage of high and intermediate loads progressively fell at the same time as the proportion of low viral loads rose.

Five weeks into the study, 70% of the samples showed a low initial viral load, corresponding to a decrease in the death rate; 45% of patients with high viral loads died, in contrast with 32% in those with intermediate loads and 14% in those with low loads.

The authors concluded that the downward trend in viral load may indicate that the pandemic is becoming less severe, implementation of physical distancing and lockdowns may have decreased overall exposure to the coronavirus, and analyzing viral loads over time may be a good way to assess pandemic progress.

"Though confounding variables have not been evaluated, this suggests an association between initial viral load and mortality," they said in an ESCMID press release.

The second unpublished study, conducted by researchers in Italy, suggests that as pandemic lockdowns in that country began, resulting in lower case numbers, COVID-19 patient viral loads on nose-throat swabs tested by RT-PCR also fell from March to May. The authors said that their findings may account for lower percentages of patients needing intensive care and dying of their infections over time.

Researchers analyzed data from 373 COVID-19 patients in an emergency department in the northern city of Negrar to assess a possible association between the severity of coronavirus signs and symptoms with viral load as the pandemic transitioned from high to low transmission.

As patient viral loads declined over the course of the pandemic, the percentage of patients admitted to the ICU declined substantially from March (6.7%) to April (1.1%), and May (0.0%).

"As the epidemiological context changed from high to low transmission setting, people were presumably exposed to a lower viral load, which has been previously associated to less severe clinical manifestations," the authors wrote.