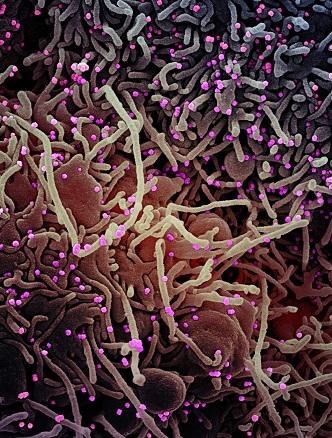 Ten days ago the World Health Organization (WHO) and its partners announced a massive effort to scale up development and production of COVID-19 vaccines, treatments, and tests and ensure that they're equitably distributed, and today countries and groups pledged $8 billion to make the plan—called the ACT Accelerator—a reality.

The global COVID-19 number is at 3,571,615 from 187 countries, and at least 250,134 people have died from their infections, according to the Johns Hopkins online dashboard.

The European Commission (EC), which hosted the pledging event, said that today's pledging session, which netted €7.4 billion (equivalent to $8 billion), almost reached the initial target of €7.5 billion and that the donor commitments are a solid starting point.

Ursula von der Leyen, the EC's president, said in a statement, "Today the world showed extraordinary unity for the common good. Governments and global health organizations joined forces against coronavirus. With such commitment, we are on track for developing, producing and deploying a vaccine for all." She said the request for support for the effort is just beginning and that the pledging marathon will continue.

About 40 countries took part in today's pledging event, but some large countries weren't part of the effort, including the United States, Russia, and India.

At a WHO telebriefing today, the group's director-general, Tedros Adhanom Ghebreyesus, PhD, called the pledging commitments a powerful and inspiring demonstration of global solidarity. He said scientists are working at incredible speed to develop tools to battle COVID-10, but the measure of success isn't just how fast, safe, and effective they are, it's also how equally they can be distributed.

Tedros said the threat of more COVID-19 waves demands that everyone on the planet be protected from the disease.

At today's briefing, the WHO also fielded questions about US Secretary of State Mike Pompeo's claim yesterday that US intelligence has "significant" evidence that COVID-19 emerged from Wuhan's virology lab, though he didn't counter intelligence reports that the virus is not man-made.

Maria Van Kerkhove, PhD, the WHO's COVID-19 lead, said the most important goal is to understand how the virus jumped from animals to people so that a similar event doesn't happen again. So far, evidence from 15,000 full genomes leans toward a natural origin, and she said the WHO is happy to help China trace the virus back to its animal source, most likely bats that passed the virus to an intermediate animal source.

Mike Ryan, MD, who directs the WHO's health emergencies program, told reporters that the WHO has not received any information from the United States on lab involvement, so that information remains speculative. However, he said if the United States has any information, the WHO welcomes it. "We focus on what we know and what evidence we have," Ryan said, adding that assigning wrongdoing is a political issue, not a science issue. "Science needs to be at the center."

Russia's daily case number reached an all-time high yesterday, with 10,633 cases, followed by 10,581 cases today, raising its total to 145,268, making it the world's seventh hardest-hit country. With 1,356 deaths, the Russia's fatalities are far lower than those of other countries.

Moscow, the country's epicenter, is still on lockdown, and President Vladimir Putin has warned residents of difficult weeks ahead.

The country is relatively well equipped with ventilators, with 27 per 100,000 citizens, more than the 18.8 per 100,000 in the United States, Reuters reported today. However, many ventilators in Russia's regional or district hospitals are older models that lack screens that track a patient's breathing process and can't ventilate lungs for as long as the newer models.

Sao Paulo state has reported about a third of the country's cases, and 332 of the state's cities have reported cases, Folha de S.Paulo reported.

Elsewhere, India's cases surged over the last few days, with 2,806 reported yesterday and 2,365 today. However, the country cleared most businesses and services to reopen today in the third phase of its lockdown plan, CBS News reported. Though the lockdown was extended and officially ends on May 18, many restrictions have been relaxed, and the government has warned that the country needs to learn to "live with the virus."

A color-coded classification system denotes areas least and most affected by the disease, and the several states in the lower-risk area can open nonessential businesses. Delhi state, including the nation's capital, is still in the red zone.

India has ordered public- and private-sector employees to maintain social distancing in offices and use a government-supported contact tracking app, a Bluetooth- and GPS-based system that alerts users who may had contact with a person who tested positive for COVID-19, Reuters said. The country's goal is for the app to be on at least 200 million phones; so far, it has been downloaded 83 million times.

The move has alarmed privacy advocates, who point out that India doesn't have privacy laws that cover the app.

In the Middle East, Yemen has seven confirmed COVID-19 cases in the south of the country, two of them fatal, the WHO said. The virus is probably actively circulating widely in the war-torn country, which has limited resources, it added.

The WHO said efforts are under way to mobilize additional supplies for Yemen and that it is working on ways to establish a more reliable supply chain.

Health officials have established a national hotline and deployed 333 rapid-response teams to investigate, test, and refer patients suspected of having coronavirus to health facilities. Yemen, which reported its first case in mid-April, has enhanced COVID-19 testing capacity in four labs.

Elsewhere in the region, the WHO announced yesterday that it has delivered medicine to Iran to enable its participation in the Solidarity Trial, a global effort to test different COVID-19 treatments.

Christoph Hamelmann, the WHO's representative in Iran, said the trial will take place in 16 provinces in 29 hospitals that have substantial numbers of COVID-19 patients. The shipment also included 100,000 more lab tests.

Japan's prime minister today extended the country's state of emergency to May 31, Reuters reported. He said cases haven't declined enough to ease restrictions but that the measures could be lifted earlier, depending on expert assessments at a May 14 task force meeting.

South Korea today announced that it will ease social distancing measures and shift to "everyday life quarantine" on May 6, Kyodo News reported. Primary and secondary school students will gradually return to school, and museums and sports facilities will be reopened in a phased system.

However, it will ask the public to take basic public health measures, such as wearing face masks, washing hands, avoiding crowds, and staying home when sick.