Nursing homes site of 40% of US COVID-19 deaths 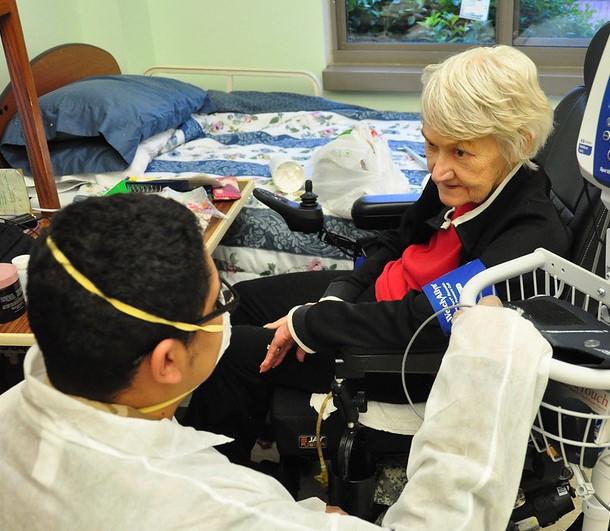 That means roughly 450 residents of these facilities have died each day from COVID-19 since March. But the newspaper said this is likely an undercount, as state reporting is inconsistent. Texas, Virginia, and Arizona, for example, have still not released facility-level data.

The USA Today numbers are double what the federal government said yesterday were the number of fatalities in US nursing homes —25,923 out of 60,439 cases.

New York had the most nursing home deaths, with 2,948, followed by 2,261 in Massachusetts.

Governor Gretchen Whitmer has lifted Michigan's stay-at-home order, one of the strictest in the country. Beginning next week, restaurants will be able to run at 50% capacity, but gyms, hair salons, indoor theaters, and casinos will remain closed. Day camps and public pools will be allowed to open on Jun 8.

Events with groups of 100 people or fewer are also allowed, and Whitmer said her goal is to have all Michigan businesses open by Jul 4. Michigan is one of the top five states hardest hit by COVID-19, with 57,731 cases and 5,553 deaths.

Today nine states— Idaho, Indiana, Maryland, Montana, New Mexico, Pennsylvania, Rhode Island, and South Dakota—and Washington, DC, will partake in a presidential primary, after many of those states delayed primaries earlier this spring because of the coronavirus. The voting will take place in cities such as Philadelphia that are currently under curfew due to social unrest after the death of George Floyd, a Minneapolis man, at the hands of police officers.

Voting will be deemed essential, however, and allowed this evening.

Poll: 70% of Americans would get vaccine

A new poll from the Washington Post-ABC News shows 7 out of 10 Americans would get a coronavirus vaccine if immunizations were free and available to everyone.

The poll also showed that 63% of Americans are still worried, or very worried, that they or someone in their family may get sick with COVID-19. Among those who say they are worried, 81% said they would get vaccinated.

In other national COVID-19 news, Admiral Brett Giroir, MD, the White House's "czar of testing" for the pandemic said yesterday he would be leaving the position in mid-June. So far, there is no replacement.

According to National Public Radio, under Giroir's watch, national daily testing counts have risen from roughly 5,000 in March to nearly 400,000 per day by the end of May. Some experts say the United States needs to test as many as 900,000 per day in order to quell the pandemic.

Finally today, in another story that illustrates the risk COVID-19 poses to America's food supply chain, a Seattle fishing trawler announced another 85 of 126 crew members have tested positive for the virus. The ship is an American Seafoods vessel; it has returned to port in Seattle and is in lockdown.

Every crew member was tested after one person came down with symptoms last week, American Seafoods said.