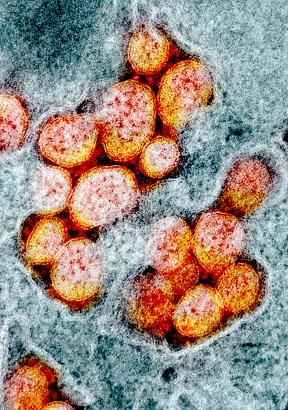 Since the COVID-19 pandemic began, the Internet has been teeming with provocative conspiracy theories that the novel coronavirus was (1) created in a Wuhan, China, lab and deployed as a bioweapon or (2) derived from bats, grown on tissue culture, intentionally or accidentally transmitted to a researcher, and released into the community.

Politicians have touted these theories in an attempt to blame China for the pandemic, and a discredited US scientist recently released a book and now-banned video claiming that wealthy people deliberately spread COVID-19 to boost vaccination rates. And late last week, an unsubstantiated NBC News report on cell phone location data suggested that the Wuhan lab temporarily shut down after a "hazardous event" in October.

Even Kristian Andersen, PhD, a professor in the Department of Immunology and Microbiology at Scripps Research Institute in La Jolla, California, and lead author of a research letter published Mar 17 in Nature Medicine on the origins of the virus, first thought that COVID-19 was just as likely to have been accidentally released from a lab as it was to have come from nature.

But that was before he learned more about COVID-19 and related coronaviruses, which have features already seen in nature. "There are lots of data and lots of evidence, as well as previous examples of this coming from nature," he said. "We have exactly zero evidence or data of this having any connection to a lab."

And while Andersen, like other prominent virologists, says that he can't completely rule out the possibility that the virus came from a lab, the odds of that happening are very small. He says the new coronavirus clearly originated in nature, "no question about it by now."

COVID-19 is sufficiently unlike other viruses to have been created from them, and making a virus in the lab from scratch would be "virtually impossible," said Stanley Perlman, MD, PhD, professor of microbiology and immunology and pediatric infectious diseases at the University of Iowa in Iowa City. "I don't think we know enough about coronaviruses—or any virus—to be able to deliberately make a virus for release," he said.

James Le Duc, PhD, professor of microbiology and immunology and director of the Galveston National Laboratory at the University of Texas Medical Branch in Galveston, said that engineering COVID-19 "would have taken an incredible amount of ingenuity. People's imaginations are running wild."

Andersen said that the virus's receptor binding domain, which makes it an efficient human pathogen, is also found in coronaviruses in pangolins, scaly anteaters proposed as an intermediary host between bats and humans. "It's something that's fully natural, so it's not something that happens in tissue culture," he said.

Angela Rasmussen, PhD, an associate research scientist in the Center for Infection and Immunity at Columbia University in New York City, said computer modeling suggests that the receptor-binding domain of the spike protein in SARS-CoV-2, the virus that causes COVID-19, is suboptimal, "meaning that someone designing an optimal receptor-binding domain sequence probably would not 'engineer' the sequence that evolved in SARS-CoV-2," she said.

"Furthermore, there are no genetic similarities with other virus backbones used in any of the known reverse genetics systems for betacoronaviruses. This suggests that this virus was not engineered."

Another COVID-19 feature, its furin cleavage site, which allows the virus to infect human cells, diminishes in tissue culture, Andersen said. "I think it could probably still infect people, I just think much less efficiently," he added.

Furthermore, he questions why anyone would go through the work of creating a new virus when they could simply take an existing virulent pathogen like the SARS (severe acute respiratory syndrome) or MERS (Middle East respiratory syndrome) coronaviruses and make them even worse, as all bioweapons programs so far have done.

"It doesn't make any sense to make a new virus that you don't know can cause disease in humans and try to create a bioweapon out of it," Andersen said. "That would be a really bad bioweapons person."

For many years around the world, scientists have studied bat coronaviruses by capturing bats in caves and isolating and growing in tissue culture the coronaviruses that they carry to see if they can infect human cells.

Called gain-of-function research, these studies improve a pathogen's ability to cause disease so that researchers can characterize its interactions with humans, allowing evaluation of its potential to cause a pandemic and informing public health, preparedness, and development of potential therapeutics and vaccines.

Shi Zhengli, PhD, director of the Center for Emerging Infectious Diseases at the Wuhan Institute of Virology, a biosafety level 4 (BSL-4) lab in China relatively close (25 to 35 kilometers [15 to 22 miles]) to the Wuhan live-animal market at the epicenter of China's outbreak, has extensively published the genetic sequences of isolates from the bat coronaviruses she studies.

None of them match those of COVID-19, Andersen said, something Shi herself confirmed in a recent interview in Scientific American. "If she would have published a sequence for the virus and then this pops up, then we would have known it came from the lab," Andersen said. "There's no evidence for this, but there is plenty of evidence against it."

Le Duc said that Shi's work on bat coronaviruses has shown that "these viruses exist in nature, and some of them have characteristics that would allow them to be transmissible among humans. The fact that we're seeing it today is not a surprise to folks that have been working in this field."

And although "certainly, accidents happen in laboratories," the high level of biocontainment at Shi's lab makes it unlikely, he said. BSL-4 labs have the most stringent biosafety protocols, which may include airflow systems, sealed containers, positive-pressure personal protective equipment (PPE), extensive training, and highly controlled access to the building.

Having attended conferences at which Shi has spoken about her work, Le Duc said she is a highly reputable scientist. "She's always been extremely open, transparent, and collaborative, and I have no reason to doubt that she's telling the truth," he said.

Plus, Andersen said the likelihood of a researcher becoming unknowingly infected with the coronavirus while wearing full PPE and then going to the Wuhan market is "fleeting compared to the alternative hypothesis, which is that we as humans, because we live amongst animals carrying these viruses—bats, but also many other intermediate hosts—and, of course, we don't go around wearing PPE, we naturally get into contact with these viruses all the time."

Yet a virus with pandemic potential is exceedingly rare, he said. "If these viruses were really frequent, we would all be dead by coronaviruses by now," Andersen said. "We would have coronavirus pandemics all the time. We don't, but they do pop up every 10 years or so, on average."

Rasmussen said that the most plausible scenario is a "natural zoonotic spillover," adding that serology studies have shown that some people in China living near bat caves have antibodies against bat SARS-like coronaviruses in their blood, "suggesting that people are exposed to related viruses in the course of their daily lives, so it’s not implausible that SARS-CoV-2 emerged in humans through a chance encounter between a human and a wild bat or some other animal."

Doubts about ever pinpointing origin

Perlman said scientists may never be able to track down the origins of the virus or its intermediary host. "I think it's really an important issue, figuring out where the virus comes from, but it's just a hard business finding it," he said.

It's human nature, he said, to want to blame someone for a natural but catastrophic event like the pandemic. "Something bad happens, and someone has to be responsible for it," he said.

Even so, Perlman decried the use of unproven origin theories to push agendas. "I think it's been used way too much as a political issue," he said. "This politicization of this is very unfortunate."

But Andersen said he thinks theories do deserve exploration, even if to ultimately refute them. "It's important that we don't dismiss them out of hand," he said. "We need to look at the data and say 'what does the data tell us?' And the data in this case are very strong."

—This story was updated an hour after it was posted on May 12 to add quotes from Angela Rasmussen, PhD.

—On May 13 information was added to clarify the relative distance of the BSL-4 lab to the live-animal market in Wuhan.