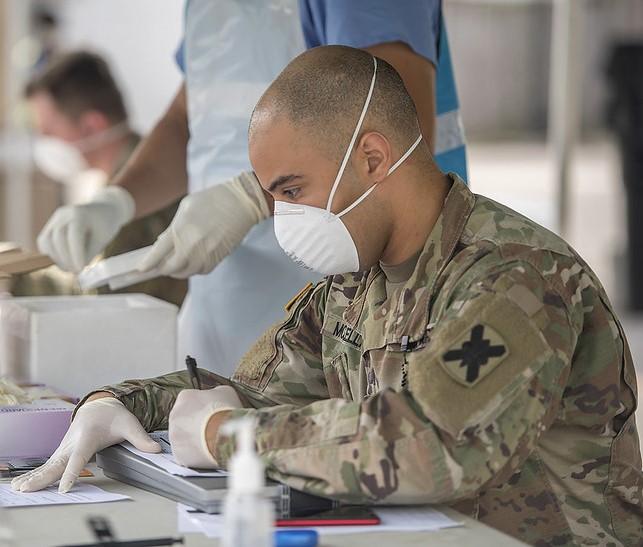 Once again, the United States saw its highest daily total of COVID-19 cases yesterday, with 60,000 new cases recorded and more than 3 million total on the Johns Hopkins University COVID-19 tracker.

This rise in cases began at the end of May, following the reopening of most states' local economies. Florida, Texas, and Arizona continue to harbor some of the largest outbreaks.

In Texas yesterday, officials tallied more 10,000 new cases, a state record. Texas is the third state to report a single-day increase of more than 10,000 cases, after New York and Florida. As of yesterday, 9,200 Texans were hospitalized for the virus. Two counties, Hidalgo and Starr, have reported that hospitals are now at capacity.

In Florida, 84% of the state's intensive care unit (ICU) beds are occupied, as 1 in 100 residents are now infected with the novel virus. Out of the state's 5,023 ICU beds, only 962 are still available.

To increase testing in the current hot spots, the federal government announced yesterday a 12-day testing campaign in n Louisiana, Texas, and Florida. Eight temporary testing sites will perform as many as 5,000 free tests a day, Bloomberg reported. Officials hope that an increase in testing in hot spots will give a clearer picture of who is getting sick, and how.

The federal testing sites will also combat testing shortages seen in hot spots. According to the New York Times, long lines and high case counts have led local officials to once again recommend that only symptomatic people seek testing.

Those recommendations are "asking the American people in those counties and in those states to not only use those face coverings, not going to bars, not going to indoor dining, but really not gathering in homes, either. And decreasing those gatherings back down to our phase 1 recommendation, which was 10 or less," she said during coronavirus task force briefing today, according to CNN.

Also at the briefing, Vice President Mike Pence said the Centers for Disease Control and Prevention (CDC) would issue new guidelines sometime next week on reopening schools in the fall. Yesterday and today, President Donald Trump called the CDC's current guidelines too tough and expensive for most schools to meet.

"As the President made clear yesterday, it's time. It's time for us to get our kids back to school," Pence said.

The president took to Twitter this morning to voice his opinion on school reopening in the fall, a day after he spoke about the issue during a public roundtable meeting. Trump said he believed keeping schools closed was a political move for Democrats, and threatened to withdraw federal funding from public schools if they stay closed.

"In Germany, Denmark, Norway, Sweden and many other countries, SCHOOLS ARE OPEN WITH NO PROBLEMS. The Dems think it would be bad for them politically if U.S. schools open before the November Election, but is important for the children & families. May cut off funding if not open!" Trump tweeted.

Yesterday Education Secretary Betsy DeVos told governors in a conference call that schools must be "fully operational" by the fall.

"Ultimately, it's not a matter of if schools need to open, it's a matter of how. School must reopen, they must be fully operational. And how that happens is best left to education and community leaders," DeVos told the governors, according to a transcript obtained by the Associated Press.

The talk about school reopening occurs on the same day New York City Mayor Bill de Blasio announced 1.1 million kids enrolled in New York City public schools will most likely be returning to the classrooms for just 2 to 3 days per week in September as a way to ensure physical distancing recommendations.

In 48 states, schools closed in March and April as the nation first saw COVID-19 infections rise. Most governors have set the end of July as a deadline for school districts to propose plans on how, if, and when to reopen elementary and high schools.

Many colleges and universities have already revealed their reopening plans, and now Harvard University and MIT, schools that have said most instruction will remain online in the fall, have announced they are suing the Trump administration over new orders that would force international students to leave American campuses if classes are not held in person.

The new rule falls under the jurisdiction of Immigration and Customs Enforcement and would affect thousands of foreign students across the country.