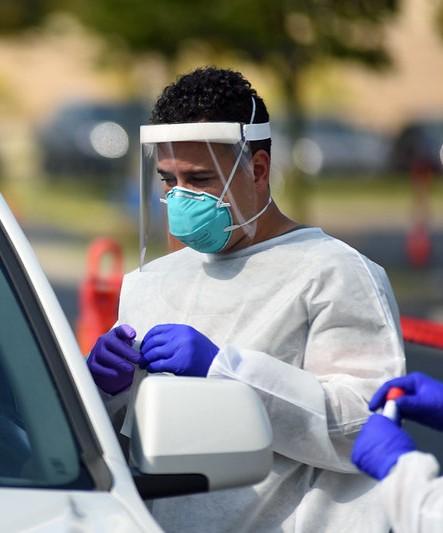 As the COVID-19 outbreak in the White House continues to grow, infectious disease experts expressed concern about the limited information coming from the Trump administration concerning contact tracing efforts, as well comments made by the president downplaying the dangers of the coronavirus.

Stephen Miller, a senior adviser and speechwriter for President Donald Trump, yesterday became the latest member of the administration to test positive for the coronavirus.

According to a website that's tracking all recent COVID-19 cases linked to the White House, Miller is the 35th person to be infected over the past week. He's also among seven people who participated in President Trump's Sep 27 debate preparation session who've tested positive.

The White House's efforts to inform staff members about infections and trace the contacts of those infected have been criticized. Earlier in the week, the White House declined offers from the Centers for Disease Control and Prevention (CDC) to help investigate the outbreak.

"Some of those policies that we all live by in infection control as we're trying to contain this pandemic have not, at least by appearance, been followed in the White House and in the federal government," Rochelle Walensky, MD, MPH, chief of the infectious diseases division at Massachusetts General Hospital and a professor of medicine at Harvard Medical School, said today at an Infectious Diseases Society of America media briefing.

Walensky also mentioned the Sep 26 Rose Garden ceremony where President Trump announced the nomination of Judge Amy Coney Barrett to the Supreme Court. While 1 people who attended that event have tested positive, Walensky said she's concerned about the people behind the scenes.

In addition, Walensky noted that contact-tracing efforts should be undertaken in places the president visited in the days before his COVID-19 diagnosis, including Bedminster, New Jersey, where the Trump campaign held a fundraiser on Oct 1. "There should most definitely be contact tracing going on there," she said.

Rajesh Gandhi, MD, also a professor at Harvard Medical School and director of HIV Clinical Services and Education at Massachusetts General Hospital, addressed comments made in recent days by President Trump in which he urged Americans not to let COVID-19 dominate their lives and suggested the flu is just as dangerous.

Discussing President Trump's prognosis, Gandhi said the next few days will be critical.

"We know that after someone gets COVID-19, the first week or so after they get symptoms is the critical period of time when they can get shortness of breath and worsening oxygen levels, and so it's critical to be very vigilant during this period of time, throughout the rest of this week and early into next week," he said.

That timeline suggests the next presidential debate, scheduled for Oct 15, could be in question. The president tweeted yesterday that he's looking forward to the debate, but Democratic presidential candidate Joe Biden said that if the president is still infectious next week, the debate should not go forward.

The guidelines from the CDC say people who've been infected with COVID-19 and have symptoms should isolate for 10 days after their symptoms begin, and can go out after 10 days only if they've been fever-free for 24 hours, and other symptoms are improving. President Trump tested positive for COVID-19 on Oct 1.

In a letter posted on Twitter today by White House Press Secretary Kayleigh McEnany, the president's physician, Sean Conley, DO, said Trump has been fever-free for 4 days, symptom-free for over 24 hours, and has not needed any supplemental oxygen since his initial hospitalization.

Meanwhile, the vice presidential debate between Vice President Mike Pence and California Sen Kamala Harris will go on as scheduled tonight, though some, including Walensky, question whether Pence should be in quarantine given his close proximity to people at the Sep 26 Rose Garden ceremony who've subsequently tested positive. The candidates will be separated from each other, and the moderator, by plexiglass.

"In my mind, I believe he meets the CDC definition for quarantine," Walensky said.

While the president's illness and the White House outbreak continue to dominate headlines, the surge in COVID-19 cases observed in Midwestern states in recent weeks is now being accompanied by rising hospitalization rates.

In Wisconsin today, state officials announced that they've opened a field hospital at the state fairgrounds near Milwaukee to handle the surge in COVID-19 patients needing hospitalization, the Associated Press reported.

"We hoped this day wouldn't come, but unfortunately, Wisconsin is in a much different, more dire place today and our healthcare systems are beginning to become overwhelmed by the surge of COVID-19 cases," Gov Tony Evers said.

Wisconsin currently has 853 hospitalized COVID-19 patients, its most since the pandemic began.

The coronavirus is also starting to overwhelm healthcare capacity in North Dakota. As the New York Times reports, the state has reported more COVID-19 cases per capita in the past week than any other state, and hospitals in the sparsely populated state are filling up. Across the entire state, only 39 intensive care unit beds are available.

Data analyzed by the Washington Post show that new COVID-19 cases in South Dakota rose by 27% in the last week, while hospitalizations in the state rose by 29%.

Wisconsin, North Dakota, and South Dakota are among 22 states, many of them in the Midwest, experiencing uncontrolled spread of the coronavirus, according to covidexitstrategy.org, a website that tracks each state's progress on controlling the virus. An additional 19 states are trending poorly.