DRC approves use of Ebola vaccine 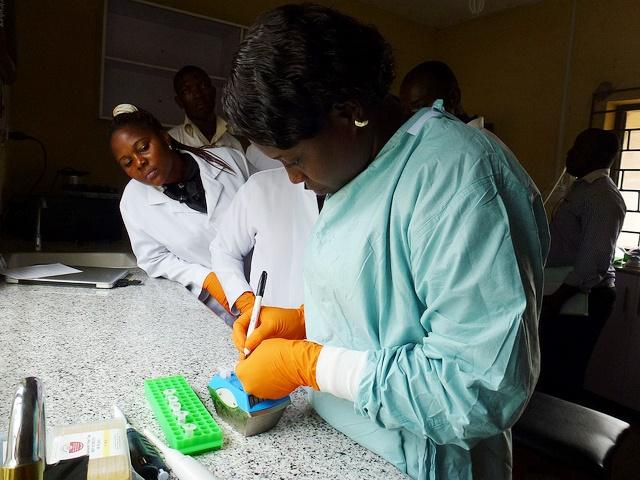 The Democratic Republic of the Congo (DRC) has approved the use of the experimental Ebola vaccine, rVSV-ZEBOV, while a new study on the vaccine showed overall good safety data, but with possible effects on joints.

The Merck vaccine has not yet been licensed, but clinical trials conducted in 2015 and 2016 showed it to be extremely effective in preventing Ebola virus disease.

According to the latest situation report, dated May 28, the World Health Organization (WHO) said the protocol for a ring vaccination, which was successfully used in Guinea in 2015, has been approved by the DRC's regulatory authorities.

"Planning and readiness should be completed urgently to be able to rapidly initiate ring vaccination should an EVD laboratory confirmed case be identified outside already defined chains of transmission. The vaccine would be offered to contacts and contacts of contacts of a confirmed EVD case, including health care workers and field laboratory workers," the WHO said.

The situation report also said that several cases of suspected Ebola have now been ruled out, meaning the outbreak appears to be not as extensive as once feared. As of Sunday, there were 2 confirmed, 3 probable, and 14 suspected cases. No new possible cases have been identified since May 11.

All existing cases remain in the Litaki health zone, a remote part of northern DRC. There have still been only 3 reported deaths to date.

There are now 101 contacts being followed for 21 dayd. The WHO also referenced modeling that optimistically showed that the current outbreak is not expected to grow. "Results suggest the risk of further cases is low but not negligible, and decreases with each day without new confirmed/probable cases; as of the reporting date, 67% of simulated scenarios predict no further cases in the next 30 days," the report said.

In a story posted on the WHO's Web site today, the organization said that rapid diagnostic technology developed during West Africa's 2014-16 Ebola outbreak has helped healthcare workers in the DRC.

Tests such as GeneXpert, which was primarily developed to detect cases of tuberculosis, can test for the Zaire strain of Ebola in 1 hour. For samples that test negative, further testing is then undertaken to check for other strains of Ebola, other viral hemorrhagic fevers, and other diseases. Another test, OraQuick, can test blood or saliva samples for Ebola virus in just 30 minutes.

Both of these rapid diagnostic tests will be used on follow-up contacts, the WHO said.

Finally today, a study published recently in the Journal of Infectious Diseases showed a generally good safety profile of the Merck vaccine in a phase 3 trial conducted in healthy adults in the United States, Spain, and Canada that was designed to show lot-to-lot consistency and provide safety data.

Although data from a ring-vaccination trial published in 2016 showed up to 100% effectiveness of the vaccine, an earlier phase 1 study showed about a 20% incidence of joint pain, among other adverse events.

In the new study, researchers evaluated the safety of the rVSV-ZEBOV vaccine in 1,194 adults and recorded serious adverse over 6 months. They reported no serious events, but they noted joint pain in 17% of vaccine recipients overall, a rate that climbed to 20% with the high-dose vaccine. In addition, 5% of vaccine recipients had arthritis, and 20% had a fever.

In an accompanying commentary, US researcher Matthias J. Schnell, PhD, said, "It appears that we are an important step closer to having an option to contain further outbreaks of [Ebola], to protect staff in laboratories, and to protect healthcare personnel in outbreak settings. However, the study also indicates that there is a need for other candidate filovirus vaccines for use in the general populations and with higher risk groups."

The authors said they will provide immune-response data for the vaccine in a future report.

May 28 WHO situation report