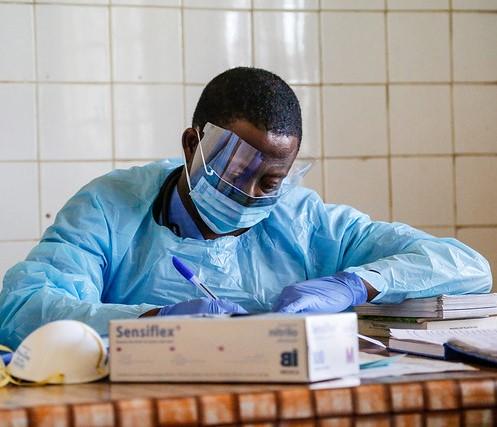 For the second day in a row, the Democratic Republic of the Congo (DRC) reported a record number of Ebola infections—this time, 20 cases—putting an exclamation point on the outbreak ahead of tomorrow's World Health Organization (WHO) emergency committee meeting to assess whether the developments constitute a public health emergency declaration.

In another concerning development, the country's health ministry said two workers at Butembo's airport were taken to the local Ebola treatment center after tests confirmed the virus. The small earthen airport receives only small carriers. The Air Rale agent and porter had attended an unsafe burial of a friend who died from Ebola.

Today, health officials vaccinated all of the airport's agents and disinfected facilities.

Of the 20 new cases, all were from the large and small current hot spots, except for one case in Komanda in Ituri province, marking a reappearance of the virus there.

The new cases boost the overall total to 1,206 cases, including 1,140 confirmed and 66 probable infections. Authorities are still investigating 246 suspected cases.

Thirteen more people died from their Ebola infections, 6 of them in community settings, a situation known to increase the transmission risk. So far, 764 people have died.

In one of its regular updates today, the WHO said the surge in cases over the past week underscores the complex reality of responding to an outbreak in a geographically difficult area with a highly fluid population, sporadic attacks by armed groups, and limited healthcare infrastructure.

On a positive note, it said the security situation remained calm for the past week, even though the DRC's electoral commission released provisional election results from delayed voting in Beni, Butembo, and Yumbi territory. The agency added, however, that several factors such as the high proportion of community deaths in confirmed cases increase the likelihood of more transmission chains in affected areas and the risk of more spread.

In summing up progress made in the field over the past week, the WHO said infection prevention and control (IPC) teams stepped up efforts to tackle resistance to decontamination among local residents by doing rapid assessments in health facilities and at patients' homes. Lingering gaps include limited knowledge of standard precautions for Ebola virus disease (EVD), lack of triage and isolation capacity, short supply of personal protective equipment, inadequate waste management, and lack of ways to decontaminate medical equipment.

"WHO is confident that strengthening these IPC measures would be an integral means of slowing the spread of EVD in the outbreak areas," the group said.

And as part of efforts to improve community engagement and curb the flow of misinformation, health officials have arranged guided visits to Ebola treatment centers so that student groups and community associations, for example, can see first-hand how Ebola patients are treated.

In related research, antibody testing in West African Ebola survivors at the 2-year mark showed memory immune responses, including specific T-cell responses, against Ebola virus, a discovery that could lead to Ebola vaccines that offer longer lasting protection. Researchers from France will their findings at the upcoming European Congress of Clinical Microbiology and Infectious Diseases (ECCMID) in Amsterdam.

T cells are a key part of immune response to viruses, but little is known about their response to Ebola virus. The team said their study marks the first time Ebola-specific T-cell responses have been shown in survivors 2 years after infection.

For their study, they examined the blood of 35 adults from a group of 802 survivors in Guinea's Ebola outbreak, characterizing the response of T-cells and cytotoxic T-cells to Ebola virus glycoproteins. Then, using gene expression profiling, they compared the blood of Ebola survivors to that of a control group of 39 Guineans who didn't have a history of Ebola infection.

All survivors had Ebola-specific immunoglobulin G (IgG), confirming their past Ebola infection. Blood marker analysis showed that the survivors had persistent inflammation, which researchers said could explain some of the lingering symptoms, such as headache, fatigue, and muscle pain.

Lab experiments that involved stimulating mononuclear cells from Ebola survivors revealed memory T cells that could produce cytokines, hinting that the cells might be able to control or clear the virus.

Aurelie Wiedemann, PhD, who led the study and is from the Vaccine Research Institute in Creteil, France, said in an ECCMID press release, "Our study of Ebola virus disease survivors could provide critical data to develop strategies for mimicking the resilience which some individuals have demonstrated after being infected, and help to better identify a correlate of protection against Ebola virus disease."