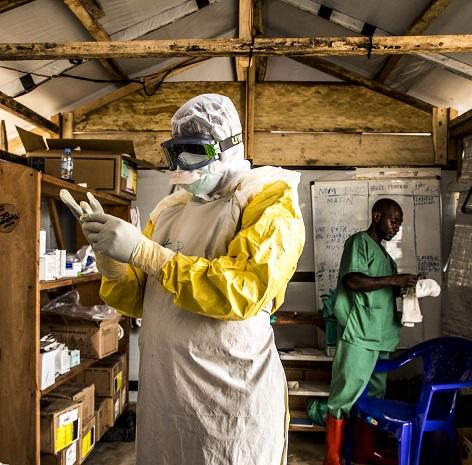 The Ebola total in the Democratic Republic of the Congo (DRC) grew by two today, and a new serologic study from five central African countries, including the DRC, found a low prevalence, hinting that exposure to the virus is probably rare outside of outbreaks.

The two latest cases were reported in Mandima in Ituri province, which has reported a handful of recent cases, and from Kalunguta in North Kivu province, an insecure area where vaccination teams were recently held by an armed group.

The cases lift the outbreak total to 927, which includes 862 confirmed and 65 probable cases. No new deaths were reported, keeping the fatality count at 584.

Meanwhile, the number of people vaccinated continued to rise, with 87,668 people immunized. Nearly a fourth of them have been in Katwa, one of the current main hot spots.

For the study, an international team of researchers, hoping to get a better handle on serologic prevalence of Ebola and the geographic range of hemorrhagic fever viruses, tested 2,430 blood samples that had been collected from 1997 to 2012 for other studies.

The countries are the Republic of Congo, the DRC, Uganda, Ghana, and Cameroon. The team published its findings yesterday in Emerging Infectious Diseases.

The experts screened the samples for antibodies using a microneutralization assay and a new luciferase immunoprecipitation system assay. Samples that were positive for Ebola antibodies were confirmed by enzyme-linked immunosorbent assay (ELISA).

For the Republic of Congo and the DRC—both of which have reported Ebola outbreaks—serologic prevalence was 2% to 3.5%, generally consistent with earlier studies. Higher prevalence rates were seen in samples from rural areas compared with urban areas.

They also found a 1.3% prevalence in southern Cameroon, an area thought to be at risk for the spread of Marburg virus, another viral hemorrhagic fever pathogen. The country hasn't reported any Ebola cases, and the authors said the findings suggests a low risk of exposure. An 1983 serologic survey for different parts of the country had found a 3% to 14.5% seroprevalence.

Taken together, the team said evidence of past Ebola exposure in different parts of central Africa might be explained by migration of people from known exposure areas or where the virus hasn't been detected yet. The authors added that some areas might be at increased risk of human exposure because of Ebola or related viruses, owing to environmental, societal, and behavioral practices.