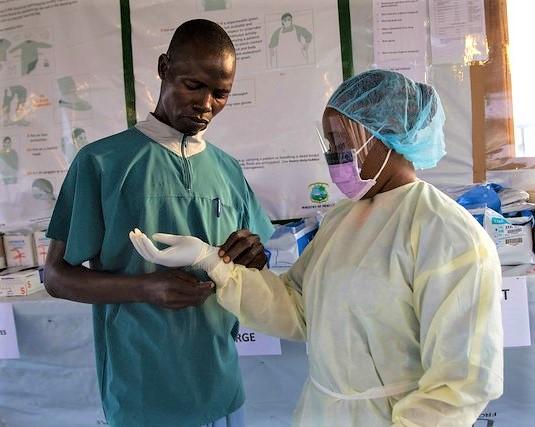 Over the weekend, the ministry of health in the Democratic Republic of the Congo (DRC) recorded 28 new cases of Ebola, and will likely confirm another 20 new cases today. With nearly 50 cases in 3 days, the outbreak is experiencing another spike in activity following the discovery of cases in neighboring Uganda last week.

According to the World Health Organization's (WHO's) Ebola dashboard, the outbreak total now stands at 2,168 cases.

In addition to the newly confirmed cases, there were 19 fatalities over the weekend, including 8 that took place in the community.

In total, 1,440 people have died during this outbreak, which began last August in North Kivu and Ituri provinces. Another 319 suspected cases are under investigation.

The new cases come from known hotspots, including 11 in Mabalako, 4 each in Katwa and Mandima, 3 in Kalunguta, 2 in Butembo, and one each in Lubero, Beni, Rwampara, and Musienene.

The DRC confirmed late last week that the 3-year-old brother of Uganda's index case–a 5-year-old boy who traveled with his family from the DRC to Uganda–had died from Ebola upon his arrival at the Ebola treatment center in Beni.

At this time Uganda has extradited all members of the boys' family, some of who were Congolese and some Ugandan, to the DRC. The family had been crossing the border between the two countries to attend the funeral of the boys' grandfather, who died from Ebola in Mabalako.

Over the weekend, Uganda's minister of health, Jane Ruth Aceng, MD, tweeted that a ring vaccination had launched in Kasese district, Uganda, involving an initial 43 case contacts. Non-vaccinated frontline health and other workers were also being vaccinated.

Today WHO Director-General, Tedros Adhanom Ghebreyesus, PhD, is in Uganda to meet with the ministry of health and discuss the Ebola response. Over the weekend, Tedros visited Ebola treatment centers and vaccination clinics in the DRC.

His visits came on the heels of a WHO emergency committee decision last week to hold off on recommendinga public health emergency of international concern (PHEIC), for a third time. WHO experts, including Tedros, said the decision was made because the overall risk of international spread is low, and a PHEIC designation could further hurt the DRC's economy.

Yesterday the DRC's ministry of health said two health workers, including one in Rwampara and one in Musienene, were newly diagnosed with Ebola. Both workers had refused vaccination with Merck's VSV-EBOV, the unlicensed Ebola vaccine currently being used in the region.

The Musienene health worker died in the community, officials said. The two new cases raise the total number of health workers infected during this outbreak to 118, including 39 deaths. Health workers represent 5.5% of all cases diagnosed since last August.

As of yesterday, a total of 135,395 people in the DRC and neighboring countries had been vaccinated with Merck's vaccine.