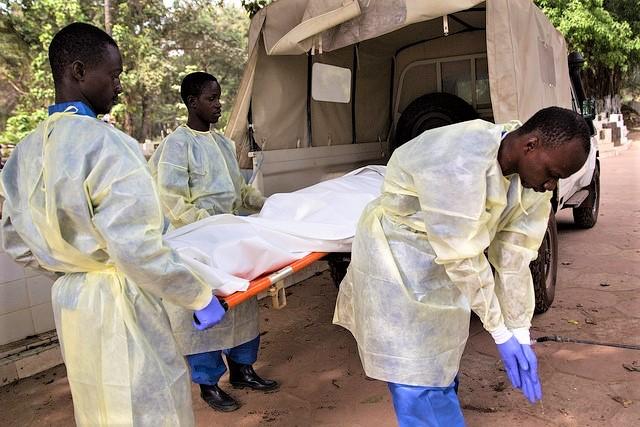 In the latest developments in the Democratic Republic of the Congo (DRC) Ebola outbreak, the health ministry reported four new cases, as details emerged about a suspected Ebola death that triggered a swift response in Uganda, where the man's samples tested negative for the virus.

The new cases signal continued activity in some of the outbreak's current main hot spots, and the close-call in Uganda shows how fear of cross-border spread has prompted intensive tracking of contacts.

The newly confirmed Ebola cases in the DRC include two patients in Katwa and two in Butembo. Also, health officials are still investigating 177 suspected illnesses.

One more person died from Ebola, a patient who was being treated at Katwa's Ebola treatment center.

The new cases lift the outbreak total to 823 cases, which includes 762 confirmed and 61 probable cases. So far, 517 deaths have been reported.

In the VSV-EBOV immunization campaign, 79,464 people have been vaccinated since Aug 8, 2018, more than half of them in Beni, Katwa, and Butembo.

A family's transport of a Ugandan man who died on Feb 8 in the DRC's outbreak region across the border and back into Uganda sparked intensive contact tracing, location of the body, and sample testing, according to a statement yesterday from the World Health Organization (WHO) African regional office.

The 46-year-old man was a construction worker who had been living and working the DRC for the past 8 years. He was first admitted to the hospital in Bunia, one of the towns in Ituri province that has reported Ebola cases, in November 2018 with symptoms that included chest pain and a sometimes-bloody cough.

Over the past week his condition worsened and he died at Bunia Hospital, where staff issued a death certificate and released his body to relatives, which included a group of 13 people from Tororo in Uganda. The group used the death certificate to cross the border and other checkpoints with the body. According to the statement, the death certificate said the man's cause of death was cardiac failure and pulmonary tuberculosis.

After learning of the incident, Uganda's health ministry—with support from the WHO—intercepted the man's relatives and the vehicle with the dead body in it before they reached their village in Tororo district. A ministry burial team and surveillance officer took oral swabs, conducted a verbal autopsy, and made plans to conduct a safe and dignified burial.

Yonas Tegegn Woldermariam, MD, the WHO's Uganda representative, said in the statement, "The immediate reporting by UMA and quick action by health workers as exhibited last night in this particular incident is what determines how quickly we respond and contain Ebola. I urge other Ugandans to take this as an excellent example as we prepare for a possible importation of EVD cases."

Uganda's health ministry said on Twitter that its teams conducted a dignified burial of the man in Tororo and that all people who were in close contact with the body have been quarantined. It added that samples taken from the dead man were sent to the Uganda Virus Research Institute, where they tested negative for Ebola. It emphasized that there are no confirmed Ebola cases from Uganda.

As part of preparedness efforts for possible spread of the virus across the border, Uganda has been vaccinating healthcare and front-line workers in high-risk districts since Nov 7. So far 3,587 have been immunized, the health ministry said.