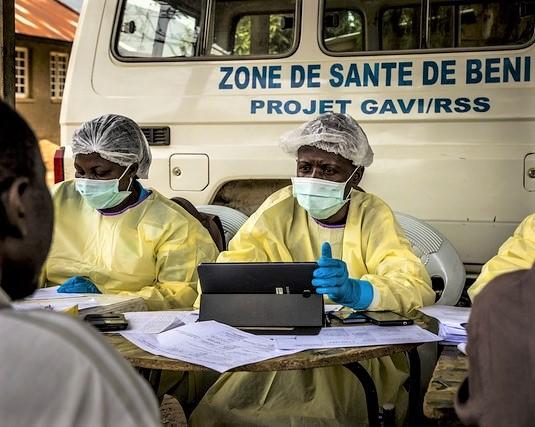 Today the ministry of health in the Democratic Republic of the Congo (DRC) recorded 27 new cases of Ebola, setting a new single-day record for this 9-month outbreak on the far eastern edge of the country. Late last week, officials recorded 23 cases in one day, the previous high.

In addition to the 27 cases recorded today, the ministry also recorded 26 deaths—also the highest daily total to date—15 of which took place in the community. Community deaths are linked to further virus transmission, as they can signal unsafe burial practices and contact with a patient's bodily fluids.

The cases and fatalities raise outbreak totals to 1,466 cases (1,400 confirmed and 66 probable) and 957 deaths. A total of 239 suspected cases are still under investigation.

The sobering numbers follow a weekend of increased virus activity. The ministry recorded 41 cases over the weekend and 31 new deaths, making this the most deadly series of days in this outbreak. The 3-day total of 70 cases is a record, as is the 3-day fatality total of 57.

And in a sign that some of these cases may be linked to nosocomial transmission, the DRC said over the weekend that three health workers were among newly confirmed cases in the last 2 weeks.

The cumulative number of confirmed cases or probable among health workers has now reached 92 (6.4% of all confirmed and probable cases), including 33 deaths.

Over the weekend Oly Ilunga Kalenga, MD, the minister of health in the DRC, held a meeting about Ebola for government leaders, including president-elect Felix Tshisekedi. Heads of finance, defense, and budget also attended the meeting.

"In his presentation, the Minister of Health insisted that, given the difficult security situation, this epidemic had gone beyond public health," the Apr 27 DRC update said. "So far, the epidemic has been contained in two provinces of the Democratic Republic of Congo, but in order to put an end to it, it is necessary to strengthen the multisectoral component of the response, and therefore the involvement of other ministries."

Throughout the outbreak, violent attacks have been followed by a rise in cases as surveillance and outbreak response is temporarily halted in the attack aftermath. Last week, doctors in the region threatened to strike if they were not offered more security.

In today's update, DRC officials highlighted a partnership among the health ministry, the World Health Organization, and two US universities to train local ophthalmologists and monitor Ebola survivors for eye problems, which can occur in nearly 20%.

"This is the first time that ophthalmic monitoring of survivors has been implemented so quickly after survivors have left Ebola treatment centers during an active epidemic," the health ministry said.