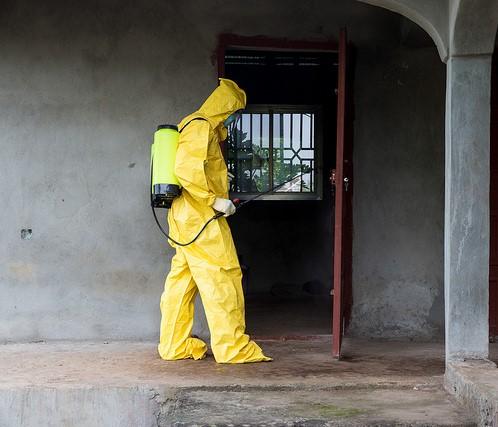 In a meeting today in Geneva, members of the World Health Organization's (WHO's) emergency committee said they did not consider the current Ebola outbreak along the eastern border of the Democratic Republic of the Congo (DRC) to be a Public Health Emergency of International Concern (PHEIC) at this time.

"This does not mean that WHO is not taking the outbreak seriously," Robert Steffen, MD, chair of the committee, said during a press conference on the decision. Steffen explained that PHEICs must meet three criteria: they must be extraordinary, pose a risk of international border spread, and require an international response.

Peter Salama, MD, the WHO's deputy director-general of emergency response, said that although this outbreak met some of those criteria, the virus was unlikely to be a major global threat. He also emphasized that the WHO will keep in place 250 health workers currently in-country fighting the disease.

"We considered things like which country is likely to see a case. Uganda is very prepared for an outbreak," Salama said, as he explained how the WHO approached the question of international concern.

The WHO continues to deem the DRC outbreak a very high risk at the regional level, the agency said in a news release today.

To date, there have been 220 Ebola cases reported in the DRC outbreak, including 142 deaths, the DRC said in an update today. Of those cases, 185 have been confirmed; in addition, 34 suspected cases are under investigation.

The DRC's health ministry reported 4 new cases, 3 of which are in the latest epicenter of Beni. In addition, three patients, all in Beni, died. The case-fatality rate stands at 65% overall, and at 58% among confirmed cases.

Salama and Steffen also said that ongoing security challenges are the biggest issue facing the response efforts. In the last 8 weeks, there have been eight major security incidents, and a recent wave of cases in Beni among people with no known contacts to previous cases is "of great concern" according to the WHO release.

Community resistance in Beni has been the focus of WHO efforts in recent weeks. Yesterday on Twitter Salama said the WHO had been successful in tracing 78% of at-risk people and known contacts in Beni, calling the situation "improving but still a challenge."

WHO leaders said the use of Merck's experimental Ebola vaccine has been vital in outbreak response, with more than 18,000 people vaccinated so far during this outbreak.

WHO defends US decision

During a question-and-answer session with journalists, WHO leaders defended the United States's decision to pull workers from its Centers for Disease Control and Prevention from the area over security issues, saying it was up to each country to determine security risks for their health workers.

But some Ebola experts, such as Ronald Klain, took to social media to make an argument for more American involvement in the outbreak. "More help from USAID is needed as well, and more US engagement with other nation—and Presidential leadership—is called for," he said on Twitter. Klain served as the US Ebola response coordinator in late 2014 into early 2015.

Yesterday, Leila Zerrougui, the head of MONUSCO, the United Nations Organization Stabilization Mission in the DRC, said rebel forces in the outbreak region are getting more and more aggressive, according to Actualite.