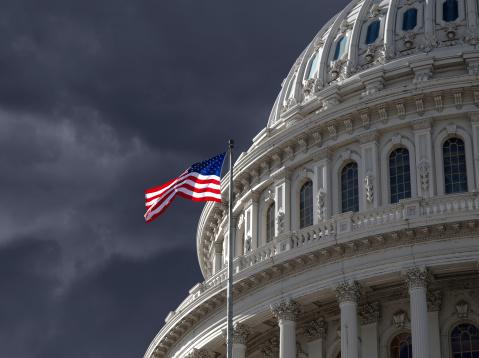 A breakdown in congressional budget negotiations led to today's US government shutdown., iStockphoto

The nation's first government shutdown in 17 years could have major impacts on the nation's ability to prepare for and respond to disease threats such as the approaching flu season and new viruses overseas such as H7N9 influenza and Middle East respiratory syndrome coronavirus (MERS-CoV), according to federal contingency plans.

Negotiations on a budget to fund the federal government ground to a halt overnight over disagreements in Congress about language meant to delay the Affordable Care Act. The impact on federal public health and food safety agencies was quickly seen this morning, as red-box banners went up on Web sites warning that updates would be limited, information could be out of date, and inquiries could go unanswered.

US Centers for Disease Control and Prevention (CDC) activities to protect citizens in the United States and abroad will continue at minimal levels, and its parent agency, the Department of Health and Human Services (HHS) warned that the shutdown will significantly reduce its ability to respond to outbreak investigations, process laboratory samples, and maintain its around-the-clock emergency operations center.

Barbara Reynolds, PhD, who directs the CDC's division of public affairs, told CIDRAP News yesterday that, of the agency's 13,000 employees in the states and abroad, about 4,000 will remain working. She said that group includes 3,000 workers who are in the Commissioned Corps or are working in programs that are supported outside of the 2014 appropriations process.

Though the CDC will not be able to support the annual seasonal flu vaccination program, the Vaccines for Children program will continue, because it receives mandatory funding. The impact on the flu programs could be pronounced, Reynolds said, because the nation is entering the flu season months, and vaccination activities are well under way.

Seasonal flu activity can begin as early as October and last as late as May, but it commonly peaks in January or February. The CDC typically begins publishing its more detailed weekly flu surveillance reports in early October.

"We won't be monitoring seasonal flu activity in the US as flu season begins," she said. The government shutdown will also hamstring the CDC's rapid response for vaccine preventable diseases such as measles and weaken its surveillance for emerging infectious diseases such as MERS and H7N9.

The CDC also won't be able to support outbreak detection and linking across state boundaries that involves genetic and molecular analysis, which presumably includes PulseNet, the national subtyping network for identifying foodborne pathogens, and a similar system for detecting norovirus, according to HHS. Reynolds said states may continue to find outbreaks, "but we won't be doing the cross-state consultation and laboratory work to link outbreaks that might cross state borders, such as a recent hepatitis A outbreak."

Some of the fully funded programs that will continue include the Strategic National Stockpile, international malaria activities, and the Haiti cholera response, according to the HHS plan.

Some activities at the Food and Drug Administration (FDA) will continue, including some vital duties such as maintaining critical consumer protection to handle emergencies, high-risk recalls, civil and criminal investigations, import-entry review, and other critical public health issues.

The HHS said, however, that FDA authorities will have to stop routine establishment inspections and some compliance and enforcement activities. Other suspended activities include import monitoring, notification programs, and most lab research needed for public health decision-making.

Some of the FDA staffing will remain in place for "safety of human life" activities, which include certain inspections, recall activities, adverse event reporting, and lot release protocol reviews, according to the HHS.

According to the HHS contingency plan, the Assistant Secretary for Preparedness and Response (ASPR), the federal agency that leads the nation's response to public health emergencies, will maintain minimal readiness and limited staffing for all-hazards preparedness and response activities. These include the secretary's operations center, the National Disaster Medical System, and specialized medical countermeasure response under the safety of human life exception.

However, ASPR won't be able to fund medical countermeasure activities, and the government shutdown could delay assisting Colorado with recovery from recent floods and preparing the nation for response if a domestic H7N9 or MERS-CoV case is detected.

Centers, however, won't admit new patients, unless deemed medically necessary by the NIH director, and the agency won't start any new study protocols or take actions on grant applications or awards.

The HHS estimates that 734 of the more than 8,000 people who typically work in intramural research labs will remain on the job to maintain cell lines and other vital research materials.

Mary Woolley, president and chief executive of Research!America, a nonprofit health research advocacy group based in Alexandria, Va., in a statement today warned that the inability of elected officials to reach a budget agreement hampers the nation's research community, which plays a key role in addressing current and emerging health threats.

"The research pipeline has already been deeply warped under sequestration, heightening the anxiety of Americans concerned about the future of their health," she said. "It's time for lawmakers to put aside ideological differences and take decisive action in short order to sustain funding for medical and health research."

The federal budget stall is even affecting PubMed, a medical and science reference database that the NIH operates as part of its National Library of Medicine. As of today, the PubMed Web portal carries a notice saying it is being maintained as much as possible with minimal staffing, but will attempt to respond to urgent operational questions.

At the US Department of Agriculture (USDA), the Food Safety and Inspection Service (FSIS) will continue its daily on-site inspections of meat, poultry, and eggs, according to the agency's contingency plan for the shutdown. The FSIS will also continue enforcing regulations and doing work for which it is reimbursed by industry.

Some activities will likewise continue at the USDA's Animal and Plant Health Inspection Service (APHIS), according to that agency's posted plan. It says a total of 1,075 employees are exempted from the shutdown because of the need to protect life and property.

Another 3,037 APHIS employees are exempted from the hiatus because they're involved in activities funded by sources other than annual appropriations, such as user fees, trust funds, reimbursable overtime, and "no-year funding," the agency document says. For example, emergency responses to agricultural pests and diseases are funded through Commodity Credit Corporation no-year funds.

Meanwhile, the Department of Homeland Security (DHS) says it can continue activities necessary to protect life and property, including counter-terrorism watches and intelligence gathering. Also, DHS's Disaster Relief Fund is fueled by a no-year appropriation and may have enough money to continue operating. DHS says it won't maintain its Web site during the shutdown.

Caroline Smith DeWaal, food safety director of the Center for Science in the Public Interest (CSPI) said yesterday in a statement that the FDA and USDA have developed thoughtful plans for continuing some basic food safety functions in the face of the government shutdown. "But make no mistake: the safety of our food supply will suffer if agreement is not reached on a continuing resolution that funds the government."

The Infectious Diseases Society of America (IDSA) expressed concern today about possible effects of the shutdown on research and public health.

Amanda Jezek, vice president of policy and public affairs, told CIDRAP News via e-mail, "IDSA is very concerned about how the shutdown (and continuing inability to have stable, robust federal funding) is impacting key biomedical research and public health activities conducted by or supported by federal agencies."

For example, she said, the NIH will not act on grant applications or initiate new protocols during the shutdown. She also noted that the CDC will be unable to support its annual seasonal influenza program, and its outbreak detection and response and infectious disease surveillance activities will be seriously limited.

Among immediate effects of the shutdown, IDSA spokeswoman Jerica Pitts acknowledged that some CDC experts have had to cancel plans to speak at the IDSA's annual conference in San Francisco this week. She said that no sessions have been canceled, as some CDC speakers will give their talks via video conferencing, while substitutes have been lined up in other cases.