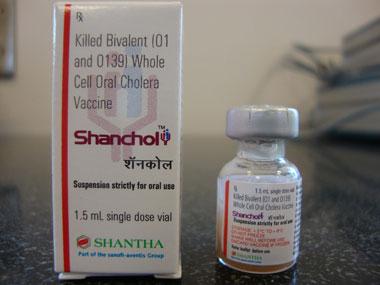 A study released today shows that an oral cholera vaccine made in India is the first such vaccine to offer significant protection for 5 years, while another new report says the vaccine was well-accepted in an immunization campaign last year in the African country of Guinea.

The vaccine, Shanchol, is made by Shantha Biotechnics and was endorsed by the World Health Organization in 2011. It is a modified version of an earlier vaccine, Dukoral, made by the Swedish company SBL Vaccin AB.

Control of cholera has relied mainly on sanitation and safe drinking water. Despite the availability of cholera vaccines in recent years, concerns about cost, acceptability, and implementation have discouraged their use, as noted in the new reports.

The 5-year vaccine trial was conducted by a large international team in a slum area of Kolkata, India. The researchers used a double-blind, placebo controlled design to assess the vaccine's efficacy in preventing cholera severe enough to require treatment in people at least 12 months old.

Residents in 3,933 Kolkata dwellings were randomly assigned (by dwelling) to receive two doses of the vaccine or a preparation of killed Escherichia coli K12 as a placebo.

The protective efficacy in children between 1 and 5 years old was lower than the overall number, at 42%, but because of a low number of cholera cases, the difference was not significant, the report says. Also, the vaccine seemed to prevent more cholera cases in children 1 to 5 years old (10.5 per 1,000) than it did in older children and adults, it states.

"Our findings support the use of oral cholera vaccine as a key component in public health programmes to protect against life-threatening and economically devastating cholera infections," the authors conclude.

The vaccine was developed for use in developing countries through a public-private partnership led by the International Vaccine Institute (IVI) in Seoul, with support from the Republic of Korea, Sweden, and the Bill & Melinda Gates Foundation, according to an IVI press release.

The study was greeted enthusiastically in an accompanying commentary by Saranya Sridhar of the UK National Heart and Lung Institute at Imperial College London and Narendra Kumar Arora of the INCLEN Trust International in New Delhi.

"This cholera vaccine is the first in the long history of cholera vaccine development to show more than 50% efficacy lasting up to 5 years," they write. Despite some remaining questions, they add, "We believe this result of an unprecedented level of long-term efficacy will be a giant leap forward for global control of cholera."

One of the remaining questions is how to improve vaccine efficacy in young children, the commentators say. They suggest trying live attenuated vaccines or giving a booster dose 2 to 3 years after the first dose.

Other questions are whether the vaccine will work well in areas where people have no naturally acquired immunity and in HIV-infected people, pregnant women, and the elderly.

"Despite all these unresolved issues, the need for an affordable cholera vaccine for international use has now been partly fulfilled," Sridhar and Arora write.

The other study was published in PLoS Neglected Tropical Diseases. It focused on a mass cholera vaccination campaign launched by Guinea's Ministry of Health in 2012, with support from Medecins Sans Frontieres, to help battle the country's ongoing cholera epidemic. A total of 316,250 doses of the two-dose vaccine were administered.

In the study, researchers from France, Guinea, and Switzerland conducted a cross-sectional cluster survey of vaccine-eligible residents in the areas targeted for vaccination, Forecariah and Boffa.

The survey showed two-dose vaccine coverage (including card and oral reporting) was 75.8% in Boffa and 75.9% in Forecariah, with coverage higher in children. The main reason cited for nonvaccination was absence. No severe adverse events were reported.

"The well-accepted mass vaccination campaign reached high coverage in a remote area with a mobile population," the authors conclude. They add that although oral cholera vaccines should not be viewed as a long-term solution for global cholera control, they should be integrated as an additional tool into the response.