CDC: Flu vaccine 61% effective, but too few adults get it 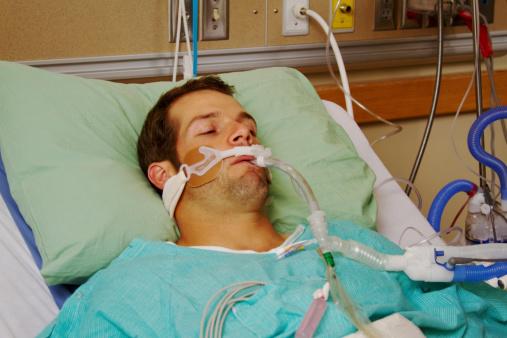 Adults 18 to 64 accounted for 61% of hospital cases so far this flu season, well above recent years., Trish233 / iStockphoto

Federal health officials reported today that this year's seasonal influenza vaccine provides an estimated 61% level of protection overall, and said in the same breath that low vaccination coverage among working-age adults may help explain why that age-group has been hit unusually hard by the flu this year.

In releasing its findings, the Centers for Disease Control and Prevention (CDC) warned that the flu season is far from over and said people who have not yet been vaccinated should do so. The agency also urged doctors to use antiviral treatment promptly for patients who have flu-like illness and are at risk for complications.

He noted that the 2009 pandemic H1N1 virus (pH1N1) is the overwhelmingly dominant strain in the United States this year, the first time that has happened since 2009. "It has not mutated substantially. It's back this year and it's hitting younger people hard. One of the reasons it is, is the vaccination rate of 18- to 64-olds is too low."

Flu vaccine coverage in the 18- to 64-year-old group in November 2013 was estimated at about 34%, compared with about 41% in children and 62% in those 65 and older, according to an article in today's Morbidity and Mortality Weekly Report (MMWR).

The same report said working-age adults account for 61% of flu-related hospitalizations and 62% of deaths so far this season, both well above typical levels.

The CDC estimated the flu vaccine's effectiveness (VE) from data gathered at five sites, in Wisconsin, Washington, Michigan, Pennsylvania, and Texas. The test-negative method was used, wherein patients who visit a doctor for treatment of an acute respiratory illness (ARI) are tested for flu and their vaccination status is determined.

A total of 2,319 children and adults were enrolled in the study from Dec 2, 2013, to Jan 23, 2014, according to a separate MMWR article today. Of those, 784 tested positive for flu by polymerase chain reaction. Twenty-nine percent of those who tested positive had been vaccinated, versus 50% of those who tested negative. That translates into a VE of 61% (95% confidence interval [CI], 52%-68%).

"We found that influenza vaccine reduced the risk of having to go to the doctor for confirmed influenza by 61% across all ages. That means that if you're vaccinated you're quite likely to be protected," said Anne Schuchat, MD, director of the CDC's National Center for Immunization and Respiratory Diseases, at the press conference.

Effectiveness against the predominant pH1N1 virus was 62%, just slightly higher than the VE for all strains, a pattern that held true in the separate age-groups.

The 61% VE compares with a final estimate of 52% for the 2012-13 season, Schuchat reported. That season was dominated by H3N2 viruses.

The new US estimate came out somewhat lower than a recent interim estimate of VE in Canada, where researchers put protection at 71% overall and 74% for pH1N1. The CDC said its estimate is "consistent with" Canada's, but in response to a question, Schuchat said the population in Canada's flu VE surveillance network is slightly younger and that this may help account for the higher estimates.

This year's US VE estimate of 61% is close to the main estimate that emerged from a careful meta-analysis of randomized controlled trials, published in 2011. The analysis by the University of Minnesota's Center for Infectious Disease Research and Policy, publisher of CIDRAP News, put the VE in working-age adults at 59%.

The CDC said the VE estimates could change when the final numbers are tallied up after the end of the flu season.

In MMWR, the agency said its Influenza Surveillance Hospitalization Network has counted 6,655 flu-related hospital cases through Feb 8. The network covers about 27 million people, or 8.5% of the US population.

Similarly, working-age adults account for a larger-than-usual share of flu-related deaths this season, though the numbers are very preliminary and based on a limited sample, the agency said.

"Flu hospitalizations and deaths in young and middle-aged adults are painful reminders that flu can be serious for anyone, not just infants and the very old," said Frieden, adding that everyone should be vaccinated. "The good news is that this year's flu vaccine did its job and protected people across all age-groups."

Frieden said clinicians should use antivirals promptly in patients who are very sick with a flu-like illness, even if a test result is still awaited or if a rapid test is negative. "Unfortunately, we're seeing that only a small proportion of people who are severely ill and have flu are treated for flu promptly. And that can make a difference," he said.

Concerning vaccination, Schuchat said 134 million doses of flu vaccine have been distributed this season, out of an estimated production total of 138 million. "It may be difficult to find influenza vaccine where you are. You may have to call a couple of places," she commented.

In response to questions about the duration of vaccine-induced immunity, officials said a flu shot received in the fall should provide protection all season and that a second vaccination late in the season is unnecessary.

Some recent studies from Europe suggested that vaccine-induced protection fades after a few months. Schuchat said the CDC has no data on waning immunity for this season as yet, but stressed that much more analysis remains to be done.

In response to other questions, Schuchat stressed the importance of getting a flu shot every year, even when the strains used in the vaccine don't change. The World Health Organization recommended today that the strains for next year's Northern Hemisphere vaccine stay the same as those used this year (see related CIDRAP News story).

"Durability of influenza vaccine is a hot topic, and there continues to be emerging data," she said. "We strongly recommend that people get the shot every single year whether the vaccine changes or not. I'd hate to assume that my vaccine from last year is going to protect me next year."

In other comments, officials said it's not very clear why the pH1N1 virus has made such a strong comeback this winter.

"What we see with many infectious diseases is what we call an accumulation of the susceptible population," said Frieden. "Infants born after H1N1 [after 2009] have not been exposed to it, so we have a cohort of susceptible children. There may be declining immunity in society as a whole, so basically our societal resistance may be lower than it was before."