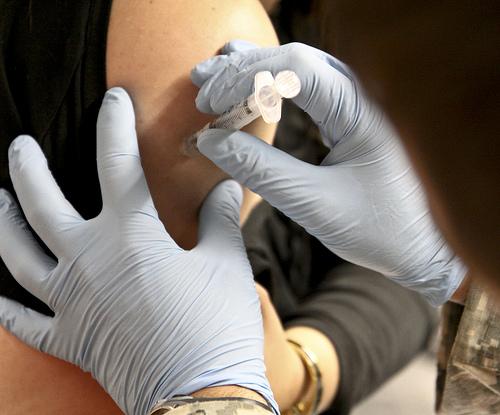 A Canadian study released this week added to the evidence that getting a flu shot 2 years in a row may sometimes result in lower protection against flu the second year, while another new Canadian study estimated that this year's flu vaccine is 42% effective against the dominant flu strain in circulation.

The first study examined flu vaccine effectiveness (VE) over three recent flu seasons in Canada, yielding new evidence that prior-season flu vaccination may interfere with current season VE—if the flu strains used in the two vaccines are the same or very similar but differ from the current epidemic strain. The report was published yesterday in the Journal of Infectious Diseases (JID).

In the second study, involving the same group as the first and published in Eurosurveillance, the researchers estimated this year's flu VE against H3N2 viruses, the dominant strain this season. They said the modest 42% effectiveness they found is consistent with previous reports of VE against H3N2, which generally is associated with worse flu seasons and lower vaccine protection than are the other two common flu varieties, H1N1 and influenza B.

The two reports were prepared by members of the Canadian Sentinel Practitioner Surveillance Network (SPSN), with Danuta Skowronski, MD, of the British Columbia Centre for Disease Control as lead author.

A number of previous studies have raised the possibility that consecutive-year flu vaccination may sometimes backfire, resulting in reduced VE the second year. In particular, signs of this were seen in the 2014-15 flu season, when H3N2 was the dominant subtype and flu vaccines performed unusually poorly in both Canada and the United States. The H3N2 component in the vaccine that year was the same as the year before, and it didn't match well with a new H3N2 "drift" variant circulating in the population.

Researchers use the term "antigenic distance hypothesis" (ADH) to describe the possible negative effects of serial flu vaccination. The hypothesis, according to the JID report, predicts that a prior season's influenza vaccine may interfere negatively with the effectiveness of the current season's vaccine when the difference, or antigenic distance, between the two vaccines is small but the difference between the vaccine strains and the current epidemic strain is large.

The researchers used the test-negative study design to measure flu VE against medically attended, lab-confirmed H3N2 flu cases in Canada during the 2010-11, 2012-13, and 2104-15 seasons. In the test-negative design, patients who seek care for an influenza-like illness (ILI) are tested for flu, and their vaccination status is determined. VE is calculated by comparing the numbers of vaccinated and unvaccinated patients who test positive. In checking vaccination status, the researchers looked at vaccination for the previous and current seasons.

The team found that the effects of prior-year vaccination varied significantly by season, which they said was consistent with the antigenic distance hypothesis.

"Effects of repeat influenza vaccination were consistent with the ADH and may have contributed to findings of low VE across recent A(H3N2) epidemics since 2010 in Canada," Skowronski and colleagues concluded.

Interim assessment of this year's vaccine

In the other study, the Canadian team used data from sentinel medical providers in British Columbia, Alberta, Ontario, and Quebec to estimate the effectiveness of this year's vaccine against H3N2 viruses, which are the dominant subtype once again. They used patient samples collected between Nov 1, 2016, and Jan 21, 2017.

"This overall estimate is consistent with a recent meta-analysis of global studies based on the test-negative design that reported a pooled VE, including both interim and end-of-season estimates, of 33% (95% CI: 26-39) against seasonal A(H3N2) viruses," the scientists wrote.

They also noted that more than 80% of patients in the study who were vaccinated this season had also been vaccinated in the 2015-16 season. Despite this, they had expected that this year's VE would be better than the low level seen in 2014-15 (the last season when H3N2 was dominant), because the H3N2 component of this year's vaccine was changed and because it matches better with circulating viruses than was true in 2014-15.

In other findings, a genetic analysis showed that 80% of 263 H3N2 isolates that were sequenced belonged to a newly emerging clade, 3C.2a1, which has one or more mutations that distinguish it from the clade 3C.2a strain used in the vaccine. In that connection, the authors observed that VE was highest in Alberta, "where an earlier epidemic start included a more limited range of clade 3C.2a1 variants" than in the other provinces.